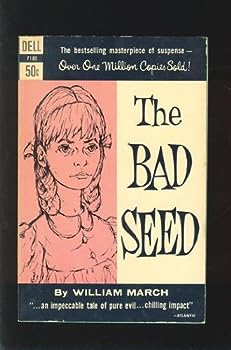 Now reissued - William March's 1954 classic thriller that's as chilling, intelligent and timely as ever before. This paperback reissue includes a new P.S. section with author interviews, insights, features, suggested reading and more. What happens to ordinary families into whose midst a child serial killer is born? This is the question at the center of William march's classic thriller. After its initial publication in 1954, the book went on to become...

Published by Thriftbooks.com User , 5 years ago
I really enjoyed this book. It was so thrilling I finished it in just a couple days. Keeps you on your toes until the end.

Published by Thriftbooks.com User , 17 years ago
Although first written in 1954, March's The Bad Seed has lost none of its vibrancy through the passage of time, and holds itself in the lead of creeping, stealthy horror that will curl your toes and straighten your hair. Christine Penmark is a beautiful young wife, recently moved with her husband Kenneth and daughter Rhoda to a languid town, finding appropriate lodging, and enrolling their precocious little girl into the Fern Grammar School. With her husband away all summer on business, Christine's social life centers around Rhoda, her effervescent neighbor Mrs. Monica Breedlove, Monica's brother Emory, and the shifty groundskeeper Leroy Jessup. Christine is a gentle and well-bred lady, and often looks upon her daughter's fastidious dress and immaculate room and wonders how she deserved such a beautiful, normal child. On the morning of the Fern Grammar School annual picnic, Rhoda is already up and dressed, her hair neatly braided, and eager to go. Christine and Mrs. Breedlove drop Rhoda off with the three aging Fern sisters, Miss Octavia, Miss Burgess, and Miss Claudia, who take the children to their old home at Pelican Bay. When a little boy mysteriously drowns at the picnic, the same little boy who won the penmanship medal that Rhoda had wanted so badly, Christine's world begins to fall apart with doubts. Memories flood back to her of Rhoda's strange friendship with an old woman back in Baltimore who had promised Rhoda her opal necklace when she died, the same necklace that hangs in Rhoda's room. Memories of the school Rhoda was expelled from for telling lies and being "a cold, self-sufficient child who plays by her own rules". Christine turns to Emory's friend Reginald Tasker, who is writing a novel about females who have committed atrocious murders, and in his research she finds something terribly familiar. In the meantime, the Fern Sisters have informed Christine that Rhoda will not be welcomed back next year to the Fern Grammar School, stating that "they can do nothing for her in their environment." Christine begins to wonder, when she looks upon her daughter, whether she is gazing at the angel or the beast. As the summer unfolds, Christine digs deeper into Reginald's research, fearful of what she will find and terrified not to learn more of her and Rhoda's past, until Rhoda takes a bold step and openly shows her mother where the real truth lies. The well-bred gentility of the characters, their languid and imperturbable lifestyles, is what gives The Bad Seed such creepiness. Looking for a black spot in a picture filled with pretty flowers is harder than looking for one in a dreary landscape, but when you find it, it seems to grow until it mars the entire painting. That is the feeling I got reading The Bad Seed, the creeping sensation of low terror that shudders like a soft vibration down your spine, leaving you uneasy and often short of breath. The Bad Seed is a must-read for any horror fan, simply because the soft touch of

A classic, and rightly so

Published by Thriftbooks.com User , 20 years ago
Wonderfully conceived, chillingly realistic. I won't give away the plot in case you've never read the book. By today's standards the approach is subtle, not for those looking for fast-paced thrills. There is no sex and no violence; at least not of the athletic, face-to-face type. At the same time, the story is thoroughly fascinating, sinister and appalling. A thinking person's horror tale and a must read for anyone taken by the genre.

Sugar and spice and everything nice, well maybe not.

Published by Thriftbooks.com User , 20 years ago
This story raises the question can people be born killers. On the outside Rhoda Penmark seems like the perfect little girl, sugar and spice and everything nice. However under her perfect exterior Rhoda is a cunning deciving child who is willing to kill for what she wants, even if it's only a penmanship medal.A the start of the novel Rhoda's mother Christina thinks she is the perfect child always clean, and polite. However as the novel goes on Christina discovers that if her little girl does not get what she wants she kills. Christina is horrifed at her discovery but is more terrifed when she discovers that her gentics make be responsible for Rhoda's lack of morality. The reader gets a great view into Christina's mind as she decides what is to be done about her daughter. This is a great story Rhoda and her mother are great charcters, and the other characters are well potrayed as well. Overall a quick and spoky read that is worth the time.

Chilling tale of an eight-year-old murderer.

Published by Thriftbooks.com User , 20 years ago
The term "bad seed" has become a much used phrase to describe a person who is thoroughly evil from birth. William March wrote "The Bad Seed" in the 1950's and it was later adapted for the stage and screen. After reading this compelling story, I can well understand its popularity. Rhoda Penmark is an eight-year-old girl who is so self-contained, aloof and uncaring that her peers shun her. Rhoda's gentle parents, Kenneth and Christine, know that Rhoda is not exactly like other little girls. When she plays, she never gets dirty. She has trouble expressing genuine affection. On two occasions, a mysterious death has occurred (one involving an elderly lady and the other a pet dog), and Rhoda was the only witness. It turns out that Rhoda had a motive for wanting both the old lady and the dog dead. Is it possible that this innocent looking girl could be a murderess? Things come to a head when the Penmark family moves to Alabama to start fresh. Kenneth is away on business while Christine tries to cope alone. Rhoda is a student at the Fern grammar school. She covets a gold medal that is given for penmanship at school, but the prize goes to a mamma's boy named Claude Daigle. Rhoda is incredulous and she refuses to accept her defeat. She hounds the boy to give her the medal that she feels is rightfully hers, until at an outing one day, Claude mysteriously drowns. You guessed it. Rhoda is the last person to have seen the boy alive. The book focuses not so much on Rhoda as it does on her mother, Christine. March lets us observe through Christine's eyes her growing horror, as she realizes that her daughter may very well be a monster. When Christine finds the penmanship medal hidden among Rhoda's things, she is sure that Rhoda must have killed Claude Daigle to get the medal for herself. March masterfully builds Christine's psychological horror as the book progresses. She learns that there is a secret in her own past that may explain her daughter's warped personality and she cannot bear the burden of guilt which this secret imposes on her. In the skilled way of good suspense writers, March does not just pile on the horror. "The Bad Seed" has a great deal of humor, much of it centered on the character of Monica Breedlove. She is an insufferable and interfering busybody who talks incessantly and who thinks that she is an expert on psychological analysis. Another memorable character is Leroy, a caretaker who himself is evil and who is obsessed with Rhoda. Leroy recognizes too late that he is no match for the little girl, and that teasing Rhoda can be dangerous to his health. A few passages, in which some characters discuss the age of violence and anxiety in which we live, are a bit heavy-handed. March seems to be conveying a message about the potential for evil that lurks within all of us. These remarks are superfluous, since Rhoda's story is so filled with horror, dark irony, and psychological suspense that it speaks for itself.

A Gem of a Horror Story

Published by Thriftbooks.com User , 22 years ago
It's a shame this book has become all but unknown behind the enormously successful movie with its God-awful copout ending (although Patty McCormick's deliciously chilling perfomance of its anti-heroine is a gem in itself), because the book is infinitely better than the movie (I can't speak for the Broadway production because I never saw it). In fact, most people who saw or heard of 'The Bad Seed' as a play or a movie never knew it was derived from William March's terrific book. March tells the story of Rhoda Penmark, eight years old, a devil lurking inside an angel's facade. To her adult neighbors, she's every parent's dream: obedient, unassuming, compliant, always neat and well-groomed, quiet, polite to her elders. She does her homework without being prodded and she gets all the answers correct on her Sunday school quiz. Those who know her more intimately suspect there's something ugly underneath all the surface charm; her peers can't stand her, her teachers see a disturbing lack of feeling or sensitivity in her, and her parents, who dote on her, wonder if she is capable of love, affection, remorse, or any of the characteristics that make us human. For Rhoda goes after what she wants with a single-minded purposefulness and anybody who gets in her way better watch out. Rhoda's father is absent throughout all but the last few pages of the book (he's away on a business trip that is important to his career advancement), so Christine, her mother, is left to deal with Rhoda on her own. Christine is a fascinating character, one of the most tragic in contemporary fiction, a decent, compliant, earnest woman, whose identity is totally bound up in being a good wife and a devoted mother; what she learns about her own history shatters her world, especially when she realizes that her daughter is the 'bad seed' she unwittingly transmitted from her own diabolical mother. And as Christine cannot accept that she is blameless in this transmission, that she did not cause her daughter's criminal behavior any more than she caused her own mother's, so she feels she must not drag anyone else, even her husband, into her private hell; she created it, so she must deal with it alone, and it undoes her. How else could Christine have acted, is left to the reader to speculate. I'm not going to tell how the book ended, except to say that it's a much more satisfying (because more realistic) ending than in the movie. But it's a spooky little gem of a horror story that deserves a much wider readership. It's well written, well plotted, and a great read. I loved it! Judy Lind
Trustpilot
Copyright © 2022 Thriftbooks.com Terms of Use | Privacy Policy | Do Not Sell or Share My Personal Information | Accessibility Statement
ThriftBooks® and the ThriftBooks® logo are registered trademarks of Thrift Books Global, LLC