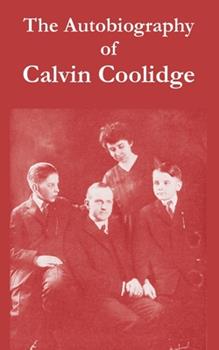 The Autobiography of Calvin Coolidge

CONTENTS: Scenes of My Childhood Seeking an Education The Law and Politics In National Politics On Entering and Leaving the Presidency Some of the Duties of the President Why I Did Not Choose to Run This description may be from another edition of this product.

Like Ronald Reagan: I can't help but admire this man

Published by Thriftbooks.com User , 13 years ago
Some years ago, I learned that Calvin Coolidge was one of the presidents that Ronald Reagan most admired. That puzzled me, since what little I knew of Coolidge was not necessarily admirable. To whit: He was known as "Silent Cal," because he didn't have much to say; and he was said to be a "do nothing" president, because he didn't accomplish much. So, when I ran across this book I decided to see if I could learn more about Calvin Coolidge and, hopefully, discover why he was held in such high esteem by America's 40th President. In answer to the first question: I don't think I learned a lot about Calvin Coolidge. it is abundantly clear that Coolidge wrote this book himself, no ghost writers here, but, he wrote it in a most unusual way. It is almost as if Coolidge, a very private and unusually modest man, was scanning a journal he had kept all his life and briefly describing what he considered to be the high points of his life. As a result, the reader seems to learn much about those who encountered Coolidge or worked with him throughout his life, and what Coolidge thought of them, and something about his major accomplishments. You see what Coolidge saw and see what Coolidge did, but little is learned about the inner man except as deduced from the sage philosophical observations which he scatters throughout his book. In short: the writing seems superficial. It tells us how Calvin Coolidge spent his "dash," but it is hard to believe that the life of this man, who rose from a modest beginning to become President of the United States, could be captured in just 247 pages with extra-wide margins and double spaced text. If the reader pays close attention to the values expressed by Coolidge throughout his book, however, he or she can clearly understand why he was so much admired by Ronald Reagan. The values expressed by Coolidge are essentially the same as Reagan's - the idealism, optimism, and "classical liberalism" of an earlier age -- as exemplified by the rural, down to earth, values of the hard working Americans of his time. To paraphrase a few: All kinds of work from the most menial to the most exalted are alike honorable. There is no dignity quite so impressive, and no independence quite so important, as living within one's means. Wealth comes from industry and from the hard experience of human toil. Any reward that is worth having only comes to the industrious. We are all fallible, but experience should teach us not to repeat our errors. Expediency as a working principle is bound to fail. There is evil in the world, but good predominates all around us. And, in the realm of government and politics: People should manage their government, and not be managed by it. In the discharge of the duties of the office [of the President] there is one rule of action more important than all others. It consists in never doing anything that some one else can do for you. Otherwise, the President will be entirely devoted to trifling details an

Published by Thriftbooks.com User , 13 years ago
Who would think about reading a book about Calvin Coolidge? I'd like to report though that it was a wonderful experience to read about a humble, self-effacing man with a legendarily dry sense of humor,in marked contrast to some of today's self-serving politicians. Coolidge tells of his boyhood,his warm relationship with his mother, father,sister and stepmother,how he was sworn in by candlelight,about his political life,but most importantly the book is a true model of character and values which can serve as a fine example for anyone,particularly for those entering political life. It would also be an excellent resource for character and values courses for elementary and high school students. Coolidge isn't known as a great president, but his interpretation was that the role of making laws was the function of Congress,not requiring presidential initiation. Since FDR of course, the President has taken on a far more active role in setting policy. Coolidge's great contribtion to history was not his presidency, but his embodiment of character and values. He also helped restore the dignity of the office after the Harding scandals, much as Ford and Carter did after Nixon. His autobiography and his character motivated me to create a website about his life,quotes,humor and his truly charming, way ahead of her time wife Grace Coolidge: www.calvincoolidge.us. I also wrote a two hour one man show of his life and performed it twice. It all started with his humble book. A visit to his family homestead where he took the candlelight oath, and also where he and his wife and sons are buried,is in Plymouth Notch, Vermont,one of New England's prettiest spots in the Fall. But I digress, as they say. The book is excellent.

Born on the Fourth of July: Silent Cal Speaks

Published by Thriftbooks.com User , 14 years ago
To the extent that most Americans remember Calvin Coolidge, it is for a series of amusing anecdotes concerning his economy with words. That characterization is only partly true. Few people know that Coolidge was one of the last presidents who wrote his own speeches and that he held regular press conferences without a press secretary running interference for him. Coolidge, the son of a general store owner in rural Vermont, was immensely popular and could have easily been renominated had he chosen to run in 1928. There was even a movement to draft Coolidge to accept the nomination in 1932. He declined and his successor, Herbert Hoover, was renominated and defeated by Franklin Delano Roosevelt. Coolidge had a syndicated newspaper column following his retirement from party politics and he produced a highly readable autobiography that is candid and simple in its approach. Coolidge possessed a sense of humor and he did not take himself too seriously. This brief book should not be dismissed by anyone interested in America during the Twenties. Coolidge's reputation suffered, somewhat unfairly, at the hands of the New Deal historians who sought to promote Roosevelt by denigrating his predecessors. Coolidge was neglected as a historical figure until Ronald Reagan sought to rehabilitate his boyhood hero. Coolidge is buried in Plymouth Notch, close to the same country cross roads store in which he was born and sworn into office by his own father following the sudden death of President Warren G. Harding.

The life story of an unsung American hero

Published by Thriftbooks.com User , 24 years ago
President Calvin Coolidge was a good man and great President who deserves to remembered for more than his reticence. Read here the life story of the President who grew up learning that hard work and a thoughtful outlook are the keys to success. He cut taxes four times and vetoed agricultural subsidies twice. He was unusually tolerant of minorities for his time. The story of President Coolidge is one that deserves to be read. Conservatives and libertarians will find his story especially appropriate for their children.
Trustpilot
Copyright © 2022 Thriftbooks.com Terms of Use | Privacy Policy | Do Not Sell or Share My Personal Information | Accessibility Statement
ThriftBooks® and the ThriftBooks® logo are registered trademarks of Thrift Books Global, LLC