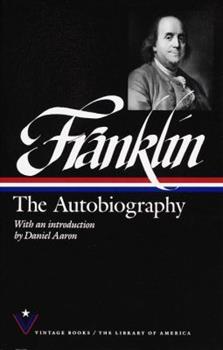 Famous as a scientist, statesman, philosopher, businessman, and civic leader, Benjamin Franklin was also one of the most powerful and controversial American writers of his time, and has been a subject of intense debate ever since: to Matthew Arnold, he exemplified "victorious good sense"; to D.H. Lawrence, he was "the first dummy American." Franklin's classic Autobiography is his last word on his greatest literary creation -- his own invented persona,...

A journey in a time machine into the 18th Century

Published by Thriftbooks.com User , 12 years ago
This book is a kind of time machine that puts you straight into the Eighteenth Century. Benjamin Franklin comes over as a fearless and open character, although he is at pains to present himself as a solid and successful businessman in the printing industry. He is very much a man of his time. He concerns himself with God and self-improvement, then after he marries he says how glad he is that he did not catch VD from 'certain low women' beforehand. This, certainly consciously, echoes St Paul's advice on why people should marry. Within the text are probably whole layers of meaning and allusions to contemporary events and news culture that are lost on twenty-first century readers. He is certainly working within religious and classical traditions of what an autobiography should be: a conversation with God, carried on in public? or moral examples and advice to the young. Sometimes he is having a laugh at the autobiographical and literary form itself. For example, it is a commmonplace of Eighteenth Century Literature that you-the writer-had no intention of publishing your book until you were prevailed upon by your friends or the public. Franklin opens the second section of his autobiography with a letter purportedly from a Quaker who says that a life of Franklin would be worth even more than 'all Plutarch's Lives put together.'This must have raised a laugh in his local club, his 'junto' as he calls it. However, within the same pages, Franklin describes, clearly with pride, how he swims from Chelsea to Blackfriars in London-which is quite a physical feat, it being two or three miles. He is also at some pains to place much of his financial success on hard work, simplicity and the avoidance of alcohol. These aspects of his life would bequite important for his Low Church readers. Interestingly-as negative examples- he reports that his London workmates routinely down six pints of strong ale a day, both at home and in the printing office. For his contemporaries, this was unusual from the point of view of the English printers being not just drunkards, but -for his audience- very old fashioned. English people in the sixteenth and seventeenth centuroes -including babies hence the phrases 'tiny tots' 'small beer' etc.- drank beer and ale as drinking street pump water was correctly suspected to cause disease. Here, through the implication that beer drinking is old fashioned and unhealthy, especially when compared to American coffee drinking, Franklin is presenting his American readers with the idea that-once again- the Colonies, rather than being a backwater, are more modern that their British counterparts in the Imperial Capital of London. At the heart of his political thinking seems to be the moral rather than political idea that with moral virtue-and thus God- on your side, you are unstoppable, and sees the United States' future greatness to lie in this. He takes pains to connect political greatness with the moral quality and education of individua

Exactly what i wanted

Published by Thriftbooks.com User , 13 years ago
This book came in excellent condition and arrived on time. it was more than i expected and just what i could hope for. i am very glad i purchased this.

Good Read for Everyone

Published by Thriftbooks.com User , 14 years ago
The autobiography of Franklin was a worthwhile book to read. I suggest ignoring the footnotes as you read his autobiography since it distracts you from reading Franklin's work. It was a good book that details how industriousness results in a wonderful, useful public life at an older age. Franklin is the type of public servant that we are lacking today.

Published by Thriftbooks.com User , 16 years ago
Well, Ben Franklin's life was not incomplete, but his autobiography is. This is partly because Franklin never intended his book for publication. He was writing it for the benefit of his son - partly as a guide for life, and partly as a family history. Indeed, on the first page, Franklin writes that he has always enjoyed hearing stories about his ancestors, and hopes his son will be as interested to learn of his father's life. However, after Franklin's break with his son, he continues to write, but now it is for the benefit of all of his ancestors. Franklin's disagreement with his son William is just one of many details that are missing from this book. I was always interested in Franklin and it had long been a goal of mine to read his autobiography. Had I known that the years 1758-1790 were not covered, which were probably the most important and influential of his life, I might not have read it. And that would have been a mistake. For although the major events of the 1770s and 1780s are missing, like the American Revolution, the Treaty of Paris, and the Constitutional Convention, there is so much material about the early years of Franklin's life here that it is still a worthwhile book. Who knew Franklin was practically a champion swimmer, for example? We often think of Franklin as the elder statesman of the Founding Fathers, as indeed he was. Franklin was born 26 years before George Washington. But in this book we see Franklin as a boy and then a young man, whole periods of his life that are forgotten when one thinks of his later, great contributions. Thankfully, Franklin documents much of it, and it makes for terrific reading. His battles with his brother, his early struggles with established religion, his bold jump to Philadelphia, and then to London, when he was still so young. He even mentions that he was a regular patron of the local prostitutes in Philadelphia! This is not something you'd see in Poor Richard's Almanac, of that I am sure. Even though the book is lacking the major events of Franklin's later life, it is still rich in anecdotes and instruction. There is much to be learned from Ben, whether he was founding the first fire department or library, or making monetary contributions to every religious denomination in Philadelphia, or his attempts at achieving "moral perfection" - actions that demonstrated his industriousness, his tolerance, his wisdom. Franklin was an incredibly fascinating character and he remains one of the giants of American history. You wouldn't know it from reading this autobiography, but it doesn't matter; the historians have safely documented his legacy in other books. In these pages, in his own words, you learn what made Franklin tick, what he believed in, and why. And that's more than enough. Five stars.

Published by Thriftbooks.com User , 18 years ago
On a personal level, most men are concerned with how they shall seem to society and judge that, if they seem well, they are well. Franklin's chief private preoccupation, as revealed by his letters, was to be well himself first. To that end as a young man he devised a chart on which he could record how often he committed each sin each day. Much to his surprise, he found that he was a sinner. In devising methods to overcome what he considered to be his worst faults, he became inspired with the judgement and skills that led him to know almost instinctively what the future nation would need and to follow through on it. We read of him founding the first libraries, the first fire companies, and the first American Philosophical Society, which originally was a discussion group to which members, who were the public at large, were invited to make presentations on some project. To see the slow and often painful growth of a population of small towns and villages into what would become a mighty nation, through Franklin's eyes, is to understand much better the formation of an American identity, the core of which is with us today.
Trustpilot
Copyright © 2022 Thriftbooks.com Terms of Use | Privacy Policy | Do Not Sell or Share My Personal Information | Accessibility Statement
ThriftBooks® and the ThriftBooks® logo are registered trademarks of Thrift Books Global, LLC