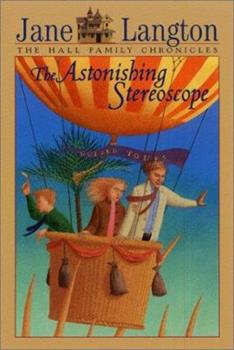 When Eddy Hall receives five cards for his stereoscope, he and his sister, Eleanor, can't wait to see what exotic places they reveal maybe Stonehenge, or a centuries-old European cathedral. But instead, when they look through the stereoscope, Eddy and Eleanor see some very strange things. An odd-looking rope hangs from the sky down into every picture. A marmalade coloured cat that looks suspiciously like Herm, the family cat, also appears. And one...

Published by Thriftbooks.com User , 12 years ago
The Astonishing Stereoscope does what the Hall Family Chronicles by Jane Langton does best--mixing an exciting adventure with ideas that most children's books can't touch. This adventure, in which a magic stereoscope transports Eddie and Eleanor back in time and into dimensions of particle physics and molecular biology, holds up very well. I read The Diamond in the Window and the Swing in the Summerhouse over and over as a child--when copies were usually held by a library. Langton's children's books stay with you--and reading them as an adult is just as much a delight as when you are 10 or 11. Jane Langton's skillful use of Henry David Thoreau's messages and the local color of more modern Concord, Massachusetts ground the series. The child characters, Eddie, Eleanor, and Grace all act like children in the series--intelligent and sensitive and occasionally impetuous children. They are that rarest of juvenile creations--curious children. I can't imagine how Langton continues the series which began in the 1960s in the 1990s--but she always finds new challenges for the Hall Family and new ideas to share with her readers. Langton is the author of the Homer Kelly mysteries, which always include some local color and her own delightful illustrations. I think that the Memorial Hall Murder is about the most memorable--it certainly kept me awake and reading back in the early 1980s.

One of my most favorite books

Published by Thriftbooks.com User , 18 years ago
Stereoscope was given to me as a gift when I was 10 years old (back in 1971). I thought "oh great, a book. :(" It sat unread for a few months, but one bored day I picked it up and couldn't put it down. Over the past 30 years I have read it again and again and come to realize how profoundly this book influenced my thinking about the natural world, religion, and our role as human beings. I kid you not.This is a delightful book that you really should buy for your favorite 10 year old.

3rd in the series, but can be read on its own.

Published by Thriftbooks.com User , 19 years ago
I know that because I read it before I read THE DIAMOND IN THE WINDOW or THE SWING IN THE SUMMERHOUSE. I enjoyed reading my library's copy so much that I bought the book the first chance I got. The stereoscope seems to have been an early version of the Viewmaster. This one is astonishing because it's another magical gift from Prince Krishna. Eddy and his older sister, Eleanor, don't just get to see 3-D views -- they can enter them to have adventures, such as meeting some of their ancestors from Puritan days. Herman the Crazy Cat shows the way. Eddy and Eleanor need the distraction because they both feel very guilty about the accident to their Uncle Fred's student, John Green. John is in a coma and Uncle Fred has to take out a loan to pay the hospital bills. Mr. Preek the banker and his secretary, Miss Prawn, are so happy. They're sure that they will be able to foreclose on the loan. Then they can finally destroy the Halls' fancy old house that they hate so much. Besides, Miss Prawn wants some of the Halls' antiques to sell. Will Eleanor and Eddy rescue their cat from being trapped in the stereoscope? Will they be able to prevent a human sacrifice in one of their adventures? Will Prince Krishna's potted palm wander the universe forever? Will John ever come out of his coma? Will the Hall family lose their home? By the way, the hot air balloon on the cover really is in the book. It's part of a guided tour that's the most astonishing view the stereoscope has.
Copyright © 2020 Thriftbooks.com Terms of Use | Privacy Policy | Do Not Sell My Personal Information | Accessibility Statement
ThriftBooks® and the ThriftBooks® logo are registered trademarks of Thrift Books Global, LLC