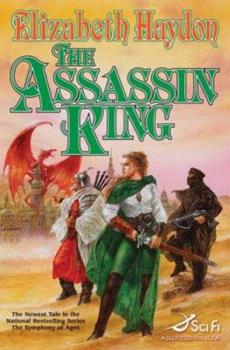 The Assassin King (The Symphony of Ages)

"The Assassin King" opens at winter's end with the arrival by sea of a mysterious hunter, a man of ancient race and purpose, who endlessly chants the names of the pantheon of demons that are his intended victims, as well as one other: Ysk, the original name of the Brother, now known as Achmed, the Assassin King of Ylorc. At the same moment of this portentous arrival, two gatherings of great import are taking place. The first is a convocation of dragons,...

Published by Thriftbooks.com User , 13 years ago
As usual Elizabeth Haydon has amazed and spell bound me. I absolutely love every book I have read by her and this is no exception. She truly makes me love her characters. This is very rare for me. I'm looking forward to the next one!

A frustrating read (but in a GOOD way!)

Published by Thriftbooks.com User , 14 years ago
I fell in love with Rhapsody, Achmed, and Grunthor in the first trilogy. I didn't enjoy the next books as much. But, I found my self really enjoying THIS book. YES, it clearly is setting up the next book. But, I feel it did it in a reasonable way, and it really contributed to the overall story and character building. I say it was frustrating to read because of how many bad things happen to the good people and how many good things happen to the bad ones. I REALLY got into it. And, so it was frustrating to see how close the good guys would come to success but not quite be able to reach it. [sigh]. But, that's why I say it was frustrating in a GOOD way. I'm totally involved -- invested -- in the outcome. I'm very much looking forward to the next book and hope it comes sooner rather than later.

Published by Thriftbooks.com User , 14 years ago
The long wait for the next installment in the Symphony of the Ages is finally over, and while I'm a little disappointed that this book is primarily a building block for the next one, I am more than happy to catch up with Grunthor and Achmed, my two favorite characters (not that there was enough of them, but some is better than nothing). Additionally, we now have Rath, who is quite intriguing in his own right and a challenger worthy of Achmed, and the F'dor have returned in force. The Assassin King is somewhat episodic, and many other new characters are introduced, while previously minor ones are expanded. But what this book lacks in flowing plot, it more than makes up for in brilliant, evocative narrative. Haydon is a master at creating atmosphere and characters, and the sheer virtuosity of her writing is a great pleasure to read. I'm still waiting to see the world that Meridion changes when he alters time, but there are many other adventures to be had in the meantime. Let's just hope that the wait between books is not so long this time, since many more questions were asked than answered. Great read and highly recommended!

Published by Thriftbooks.com User , 14 years ago
For those that are fans of the Symphony of Ages series it has been a long wait for this book. I am ecstatic that it has finally come out and I was not disappointed by it. I can only hope that there will be a shorter wait for the next in the series. The story of The Assassin King begins shortly after where the previous book in the series, Elegy for a Lost Star, left off. This is a crucial moment in the storyline of the series. The world is starting to unravel and it is up to the heroes, including Rhapsody, Grunthor and Achmed, to fight for their world. It is nice to have the three main characters together as a team again. The Assassin King is a pivotal point in the series that sets the foundation for the future storyline. As a result of this it does not have the same sense of "completeness" as the previous books in the series. This is not a negative criticism because it is a necessary step for the continuing narrative, but I would like to forewarn people. I would have liked to spend more time with Rhapsody, Grunthor and Achmed, but because of the multiple story threads that are taking place, that are necessary to establish, this was not possible. Because of the set-up Haydon has done in The Assassin King I am optimistic that the next book will see these characters more at the center. The Assassin King plays a crucial role in the development of the overall storyline, but at the same time has a lot of good elements that stand by themselves. I highly recommend this book and the entire series. This book has fed my craving for the Symphony of Ages series and has whetted my appetite for more!

Long Awaited and Well Worth It!

Published by Thriftbooks.com User , 14 years ago
I have been waiting for this book for more than a year, but the wait was well worth it. The Publishers Weekly review is much closer than the one from Midwest/Klausner. Elizabeth Haydon has been the master of words and images in epic fantasy for a while, not just an endless stream of plot points. Whether she is describing a horrible seige to a holy city or the tiniest details of an underground hive a forgotten bees, you can literally see the pictures she is painting. My favorite character in her series, Achmed the Snake, is back in all his sarcastic, obnoxious force, as are Grunthor and Rhapsody in a return to the old days of the Three, plus an infant that has the ability to step in and out of time but can only communicate the way a real baby can. While it does take a chapter or two toward the beginning to catch up to what is going on, the book flies from there. I read it in two long sittings and am about to start it again, so I can enjoy a great discussion with all the other Achmed fans who've been drooling for this for years. Highly recommended.
Copyright © 2020 Thriftbooks.com Terms of Use | Privacy Policy | Do Not Sell My Personal Information | Accessibility Statement
ThriftBooks® and the ThriftBooks® logo are registered trademarks of Thrift Books Global, LLC