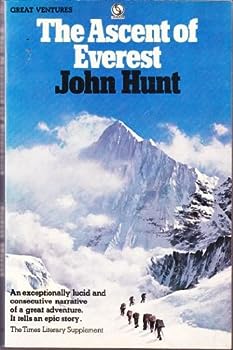 Expedition leader John Hunt's account of the first ascent of Mount Everest's summit in 1953 by Sir Edmund Hillary and Sherpa Tenzing Norgay. This description may be from another edition of this product.

Published by Thriftbooks.com User , 12 years ago
So there I was, flicking through the history section of my local 2nd hand bookstore. And somehow my eyes alighted on a 1957 reprinting of this book in paperback for a whole A$1.50. And so of course I bought it. And it turns out that this is quite an interesting book. As the blurb on my copy alludes to this is a work that should be of interest to anybody interested in inspiring human endeavour and find an audience outside the mountain climbing fraternity. And given the plethora of books that have come out in the last couple of decades about inspiring human achievement this book is certainly worth a visit for anybody who loves that kind of thing. The book was written in the months after the successful ascent of Everest by Sir Ed and Tenzing Norgay and by the expeditions leader John Hunt. From his view at the top of the pyramid Hunt is able to give a good indication of the reader as to the huge amount of work that went into the expedition from it's inception and through to gathering provisions and the like from A to B. All up I found this enlightening though must own up to not being utterly thrilled regarding who was reponsible for what. However the authors pains to give credit to the whole crew is to be commended in an era of 'look at me, look at me' adventure travel and reality TV myopia. As the story unfolds the pace of your page turning will pick up despite the very old school British way the author has. Those less used to the idioms of this language will perhaps find parts of it heavy going but others will probably find it somewhat charming. Certainly the essence, the feel of the everyday grind of conditions does shine through. After the summit is reached the reader will probably experience a lessening of interest but I found the last pages of the book interesting as psychologically you could feel the emotional drain of the author and his team after succeeding in their task and the fact that they felt so 'washed out', so to speak. Not a five star book as it is slow in parts and the idiom could put the odd latter day reader off. But for sheer inspiration - the team played hard and came home with a win where tragedy had befell so many others and for that I doff my cap.

Ascent and Conquest of Everest are one and the same book!

Ascent or Conquest of Everest?

Published by Thriftbooks.com User , 19 years ago
I heard about the book Ascent of Everest by John Hunt while visiting the Auckland museum in NZ. But now I see there also is a book entitled Conquest of Everest and I fear my memory is failing me. Which one is it that I heard about? Has anybody read both? Which one is better? Which one is the "real" one?Thanks all, both books are out of print so it's not like I can go to the local bookstore to find out.

Required reading for every "executive"

Published by Thriftbooks.com User , 19 years ago
I loved this book. Have read many Everest books, and this is one which I would use to replace the acres of "management" and "team building" books cluttering up bookshops. (Perhaps one other: about Shackelton's leadership during his abortive Antarctic expedition).This book is old-fashioned in values, and style. It is about unfashionable concepts such as: absence of personal glory ('me-ism'). In this successful endeavour, accomplishment does not depend on tearing down what has gone before, it does not emphasise "the power of one", rather the contributions and power of many. It is redolent of : trust, enlightened leadership, graciousness, reliability, collective spirit and ability.I found fascinating the detail of how the "assault" was undertaken. One quote which sums up the spirit of the venture:" The mission we undertook was not, in our eyes, in the nature of some competition on a giant scale in which we vied to outdo the efforts of previous expeditions, dramatic and popular as such a concept might be. Indeed, prolonged attempts t climb a difficult mountain are, or should be, essentially different from those of a competitive sport. A possible analogy, however, might be that of a relay race, in which each member of a team of runners hands the baton to the next at tthe end of the allotted span, until the race is finally run. The Swiss last year received that baton of knowledge from the latest in the long chain of British climbers and they in turn, after running a brilliant lap, passed it on to us. We chanced to be the last runners in this particular race, but we might well not have succeeded in finishing, in which case we would have handed on our knowledge to our French comrades who were preparing to take up the challenge."

The Ascent of Everest

Published by Thriftbooks.com User , 22 years ago
An Absolute must as the book to read before trying out all the many other Everest books. The clear and descriptive image for every detail leaves the reader with an impression of "excellent graphics". In terms of modern management techniques it teaches what you need to know about teamwork, leadership and outcomes based decision making.
Trustpilot
Copyright © 2022 Thriftbooks.com Terms of Use | Privacy Policy | Do Not Sell My Personal Information | Accessibility Statement
ThriftBooks® and the ThriftBooks® logo are registered trademarks of Thrift Books Global, LLC