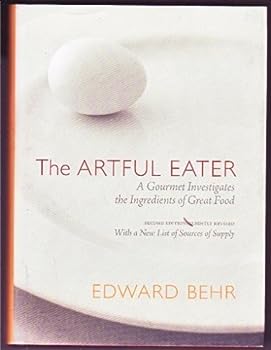 The Artful Eater: A Gourmet Investigates the Ingredients of Great Food- With a New List of Sources of Supply, 2nd Revised Edition

What makes good food good? When Edward Behr sets out to answer that question, his quest leads from the seemingly prosaic properties of salt and pepper to the differences among vanilla of different... This description may be from another edition of this product.

Published by Thriftbooks.com User , 13 years ago
Well researched and well written. The chapter on apples, however, was regional in scope, and would not be relevant in the Pacific Northwest, where we have mostly other varieties.

Published by Thriftbooks.com User , 17 years ago
The best book on food, eating, etc, I have ever read. There are 18 chapters on 18 different subjects, ranging from tomatoes to ham to coffee to salmon. Each one gives a concise history of the subject, how it came to its modern form, what the best types are and how to order them (or grow them yourself and order the seeds, as appropriate), what the flavor components are, etc. For even a half-hearted gardener, just the chapter on tomatoes is worth the price of the book. This is a book that a foodie will deeply appreciate and re-read often, but even folks who don't take their food that seriously will like it, too.

Published by Thriftbooks.com User , 18 years ago
`The Artful Eater' by Edward Behr belongs to one of the rarest types of culinary writing, which is scholarship about food and eating. Virtually the only other published practitioner of this discipline I know of is John Thorne. Both Thorne and Behr publish culinary newsletters and books from both contain enriched articles from their periodicals. While Thorne typically deals with the anthropology and history of classic recipes, `The Artful Eater' material from Behr, subtitled `A Gourmet Investigates the Ingredients of Great Food', is a study of eighteen basic ingredients. In these articles, Behr investigates things that almost the entire culinary world either takes for granted or gets wrong. One of my favorite `unexamined principles' of the modern culinary liturgy is that the best way to shop is to buy produce in season at local farmers' markets. The problem with this statement is that the reasons why this is good idea are few and far between. It is common knowledge that corn on the cob starts turning sugar to starch the moment it is picked and that out of season tomatoes imported from the sunny south or from greenhouses are pale imitations of homegrown crops, but that is about it. Behr adds a third documented reason to buy locally with his essay on carrots. He points out that carrots grown in a warm climate such as Florida never develops the kind of sweetness so desirable in most recipes because the warm nights cause the stuff to be metabolized into sugar to pass into the warm night air. On top of this intelligence, he adds that carrots with the greens lopped off are actually more likely to retain moisture, as the plant may continue to respire moisture out of its green tops with no way to replenish the moisture from the root once the vegetable is out of the ground. Behr makes the warning doubly useful in cautioning us to investigate from where the farmers' market produce stand actually gets its goods. I am entirely with him on this point, as I am sure that my local large farmers' market gets many of their vegetables from Florida or California. The other seventeen subjects of Behr's articles are salt, tomatoes, mint, mussels, sorrel, Atlantic salmon, black pepper, country ham, bay leaves, traditional mustard preparations, roast beef, eggs, apples, cream, vanilla, English walnuts, and coffee. The article on mussels contains an example of the author's correcting a common misunderstanding. One belief about mussels is that they should be bought with their beards intact. Behr demonstrates that the presence or absence of the beard has nothing to do with the food quality of the mussel. The article on black pepper brings a great deal of knowledge about a very common but very commonly misunderstood family of spices. Only black and white and green pepper are related. The many other varieties of `pepper' such as red or pink are actually from an entirely different plant. Behr adds information about a wide range of other spices related to the pepper whose

Published by Thriftbooks.com User , 21 years ago
"The Artful Eater" is similar to "The Man Who Ate Everything" in its detailed, perhaps obsessive attention to things gustatory. Behr's writing tends to be more serious, less irreverent and self-deprecatingly humorous than Steingarten's. He approaches food with gravity and curiosity but certainly not with the righteousness and pompousness of Christopher Kimball. He has collected here essays that each explore in detail a single food type, such as apples, eggs, walnuts, or vanilla beans. He infuses his writing with interesting facts about using the ingredient, how it produced, and ways of discerning quality. I imagine any experienced cook would enjoy the book as a gift.
Trustpilot
Copyright © 2022 Thriftbooks.com Terms of Use | Privacy Policy | Do Not Sell My Personal Information | Cookie Preferences | Accessibility Statement
ThriftBooks® and the ThriftBooks® logo are registered trademarks of Thrift Books Global, LLC