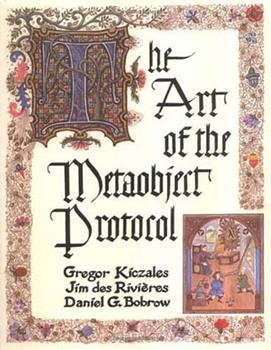 The Art of the Metaobject Protocol

Published by Thriftbooks.com User , 16 years ago
Although I am mostly a C/C++ programmer, I still found this book to be an interesting read. If you, like me, have an interest in programming language design and implementation I highly recommend it. As other reviewers have noted, however, the book has little material for Lisp programmers who just want to use the MOP without looking under the hood. I don't consider this a shortcoming - understanding the design and implementation of your language and tools helps in using them effectively.

Authoritative, but less useful than it could be

Published by Thriftbooks.com User , 19 years ago
As a presentation of how to implement the Metaobject Protocol, this is about as authoritative a presentation of CLOS as can exist, short of being a formal (dry!) standards document.Unfortunately, it falls way short in motivating the USE of the MOP. It shows how it is implemented, and has some examples of how to modify its behaviour. Which is wonderfully useful if your interest is in building your own implementation of MOP. It is not nearly so useful if you're trying to figure out how to apply it to less extraordinary purposes.To that end, Keene's book on CLOS, which demonstrates quite a number of usage examples, is a vital companion...

Highly recommended, but fell short of my expectations

Published by Thriftbooks.com User , 20 years ago
This was a disappointing purchase for me, as I read some of the book on-line (in CMU-CL's "Encycmuclopedia") and was rather stunned at the beauty and possibilities of the MOP (which, in short, is defining the core object system itself in terms of the object system, allowing you to use the full power of the object system class hierarchy/relationships to control your object semantics). The book is a pretty straight forward implentation discussion, which is certainly nice as a case study in implementing such an interrelated system and boot-strapping the MOP into use, but it is only that. The MOP is one of those perfect ideas with such vast potential that I would much rather have seen actual expressions of that potential instead of mere inner working details. If I'd know that, I would not have bought it--but then neither will I be selling my copy.

A Must if want to control your Object Inheritence Mechanisms

Published by Thriftbooks.com User , 24 years ago
This book is the first so far to completely discuss the mechanisms of the Metaobject Protocol. This is an advanced treatment and will be of value to the experienced Lisp programmer. The book covers all aspects of the MOP in great detail and when the reader has finished it, he or she will be very comfortable with CLOS mechanisms, and even more importantly, why these features have been implemented in the ways that they have.
Trustpilot
Copyright © 2022 Thriftbooks.com Terms of Use | Privacy Policy | Do Not Sell My Personal Information | Accessibility Statement
ThriftBooks® and the ThriftBooks® logo are registered trademarks of Thrift Books Global, LLC