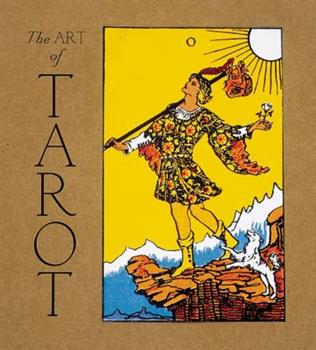 Originally used by northern Italian aristocrats in complex games resembling bridge, tarot cards became more popular with the spread of printing in the sixteenth century and were eventually used by... This description may be from another edition of this product.

Published by Thriftbooks.com User , 15 years ago
This is a real treasure! Small in size, but the cards are printed almost full page (appr. 2 x 3.8 inches, as on the cover). The full color reproductions of the cards are of excellent quality, equalling the quality of the real cards. Major Arcana cards from the most well-known decks from the Renaissance are shown: Brambilla (Minor Arcana), Cary-Yale Visconti, Visconti-Sforza AND the Charles VI (or Gringonneur) Deck, which I have never seen depicted before - so this alone makes the book worth buying. Some of the other decks from which Major Arcana cards are shown are: Catelin Geoffrey, Anonymous Parisian, Giuseppe Maria Mitelli, Grand Oracle des Dames, Rider Waite, Dali, Oswald Wirth, Xultun, Doerflinger (never heard of this one..), Crowley, Voyager, PoMo (Post Modern) and Cat People. Photographs of some of the tarot statues by Nicki de Saint Phalle are also included. The book begins with a 16 page introduction on the history of the Tarot. Each of the following chapters (15th century; 16th and 17th century; 18th, 19th and early 20th centuries; 20th century) is introduced with a short text, giving some background information on the decks that are shown. It is a really great buy for every Tarot lover, even if you already own Kaplan's set of encyclopedias. Come on, treat yourself, it is not even expensive!!

great to see, a focus on the 'art' of the tarot

Published by Thriftbooks.com User , 21 years ago
Olsen does a wonderful job providing a glimpse of what is sometimes forgotten about the Tarot-the artwork, which is after all, the basis of the Tarot! Without it, the images on the cards would not have the fascinating ability to draw us to the Tarot in the first place. The Tarot would have likely disappeared, were it not for the dedicated artists who continued its formulation throughout generations.
Trustpilot
Copyright © 2022 Thriftbooks.com Terms of Use | Privacy Policy | Do Not Sell or Share My Personal Information | Accessibility Statement
ThriftBooks® and the ThriftBooks® logo are registered trademarks of Thrift Books Global, LLC