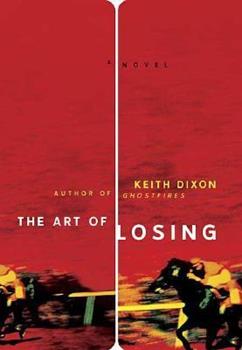 The Art of Losing: A Novel

Michael Jacobs, a talented but obscure New York City filmmaker, has just watched his third film flop at the box office. With few options available, Jacobs is tempted by the prospect of easy cash when Sebby Laslo, his producer, makes a one-time offer. With the help of a corrupt jockey, Laslo plans to fix a horse race, but his gambling debts have left him untouchable and he needs someone he can trust to be the public face of the operation. Though Laslo...

The art of filming isn't hard to master...

Published by Thriftbooks.com User , 15 years ago
Mike Jacobs gets a lot of advice in THE ART OF LOSING, and most of it is good. Some of it is from his would-be girlfriend, a Danish filmmaker who knits scarves and hats to remind her distant relatives that it's cold outside. Some of it is from his wealthy parents who caution him about the lure of money. And some of it is from tough guys who work for bookies and have no compunction about slamming Mike's hand in a door should he not be able to pay off his bets. It's all good advice, but he doesn't listen to very much of it. Mike makes films, a process that is a gamble all its own. ("Films," you understand. Not "movies," never "movies.") The failure of his third film is the catalyst for the tale, and is instructive in and of itself. It is a documentary called The Daisy Chain (Mike never explains the significance of the title) that takes place in Bellevue, the psychiatric hospital in Manhattan. Mike spends a year of his life and every scrap of money that he can get his hands on to make the film --- cutting corners by having the psychiatric patients who are the subject of the documentary handle the camera work, for example. The Daisy Chain premieres in New York, but only a few people show up. Certainly not enough to make the production company any profit, certainly not enough to get the film to a wider audience in arthouse theaters across the country, certainly not enough to sell the film to the cable networks, and certainly not enough to compensate Mike for the year he took out of his life to make the film. So, you're an impoverished New York filmmaker, in between films, and you need money fast --- not just to make your next film but to make your next meal; not just to stave off the "starving artist" cliché but starvation itself. What can you do? What should you do? What Mike Jacobs does is play the ponies. The novel opens up at Aqueduct, where Mike and his producer Sebby Laslo have a line on a sure thing, a 50-to-1 shot that will pay off huge if it can just manage to overcome its little problem of an injured tendon. The horse finishes last, consistent with Mike's own track record. But Sebby knows a jockey, and the jockey knows horses, so there might be a way after all to turn the tables on the odds and walk away with enough money for Mike to lift himself out of poverty without compromising his artistic integrity or begging his parents. This requires Mike to ignore a lot of the advice he receives --- even though it's well-meaning, correct and meant to save his life. Author Keith Dixon sets up the first half of the book with any number of escape routes, ways that Mike can save himself by pulling out of his self-destructive spiral. And then, one by one, Dixon closes the routes, locks off the tunnels and artfully seals Mike's fate gradually. THE ART OF LOSING benefits from more than the deft plotting and its cynical, paranoid tone. Dixon gives Mike a cinematic eye for details, describing even the most minute experiences --- visiting the eye doct

this is an odd little book

Published by Thriftbooks.com User , 15 years ago
not quite what i expected. but the writing is solid and the author has talent. i found some of the situations and the way people acted hugely implausible but still enjoyed the book. it's a noir. very dark and thank God the author didn't opt for a cute and happy ending. it's a nice distance from the "new" kind of crime novel that has to be cute and funny. If you like this you'd like Con Ed another very good crime book that is very much along the same vein as this one. it's good to see this kind of book getting some success. this writer had talent and the book just breezes along. can't wait to see what this author comes up with next.

Published by Thriftbooks.com User , 15 years ago
I started reading this book expecting a fun and sharply written crime-caper. After all, the advertised plot revolves around a documentary filmmaker (Mike Jacobs) based in NYC (which is beautifully rendered), who seeks fast money by placing bets on what appear to be fixed horse races. This plan, of course, is quickly complicated. What I didn't expect, and greatly enjoyed, were the deeper levels of the story - themes of memory, conscience, and redemption. Yet while the book is thought-provoking, Dixon avoids cliches, and he avoids bogging down the story with exposition. The tale cracks along. "The Art of Losing" would make an excellent movie - especially if it was directed in such a way that the story retained it's subtlety. Highly recommended.
Trustpilot
Copyright © 2022 Thriftbooks.com Terms of Use | Privacy Policy | Do Not Sell or Share My Personal Information | Accessibility Statement
ThriftBooks® and the ThriftBooks® logo are registered trademarks of Thrift Books Global, LLC