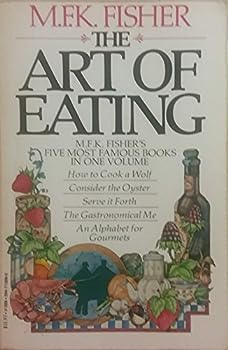 The Art of Eating

RUTH REICHL "Mary Frances [Fisher] has the extraordinary ability to make the ordinary seem rich and wonderful. Her dignity comes from her absolute insistence on appreciating life as it comes to her." JULIA CHILD "How wonderful to have here in my hands the essence of M.F.K. Fisher, whose wit and fulsome opinions on food and those who produce it, comment upon it, and consume it are as apt today as they were several decades ago, when she composed them...

Thank heavens, "Art of Eating" is back in print

Published by Thriftbooks.com User , 19 years ago
For some inexplicable reason, the brilliant writing of M.F.K.Fisher was out of print, or hard to obtain for a while. Her prose is possibly some of the best writing from the 20th Century, so the difficulty in getting her books was rather puzzling. If you read anyone who writes about cuisine, they always refer to M.F.K. Fisher as some kind of luminary. In "The Art of Eating", there is every opportunity to examine why her writing is held in such high esteem.This book is a compilation of her most famous works "Consider the Oyster," "Serve It Forth," "How to Cook a Wolf," "The Gastronomical Me" and "An Alphabet for Gourmets." Each is quite different. "How to Cook a Wolf" is about cooking in times of want, in this case, World War II, but the book really becomes semi-autobiographical and talks about her young days in Dijon, where she was the wife of a student at the University.If you haven't read M.F.K. Fisher, this is probably the best book to start with--it combines memoir with culinary musings; advice on scrambled eggs with her own ideas about health and nutrition. If you then can't get enough of Fisher, I recommend, "The Measure of Her Powers" which is much more autobiographical and utterly fascinating. I actually read Fisher more for her memoirs. Her fascination with food and cooking is to me about life and art,--the French view of food not as something merely to fill the belly, but as an art form and a craft.

In the Kitchen, by fermed

Published by Thriftbooks.com User , 20 years ago
There are two types of cookbooks: those that you consult in order to learn how to prepare a specific dish (squid in its ink, for example) and those that you read when you are not in the kitchen and then allow to settle in your brain for a little while, and from which you decide, in time, to prepare something special. "The Joy of Cooking" is of the first type, the "Art of Eating" of the second kind.There are two types of cookbook authors: those who did not follow a drive to become apothecaries and instead wound up in a kitchen. Now they issue a prescriptive formulary of carefully controlled measures, procedures, times, weights, and ingredients (no substitutions, please) in precise, neat, humorless texts: recipes by edict, if you will; and those who under other circumstances would have become poets or novelists, but instead wound up in the kitchen, from whence they issue lyrical prose as well as exquisite dishes. Their recipes are often vague, permissive, infuriating, but tolerant of errors. There are many who fit the first category and few (MFK Fisher among them) the second.There are two ways of comparing cookbooks: by following recipes for highly complex dishes (beef Wellington, say) and tasting the results, or by following extremely simple recipes from each book and making gustatory comparisons (scrambled eggs, for instance). Scrambled eggs, according to general culinary wisdom, requires that eggs be beaten together "until the white and yolks are completely combined" (Joy of Cooking) or to be whisked briskly (Fanny Farmer).Ms. Fisher starts by addressing the state of mind of the cook before embarking in the scrambling of the eggs: "This concotion" she comments "is obviously a placid one, never to be attempted by a nervous, harried [person], one anxious to slap something on the table and get it over with...I love this recipe, for its very gentleness, and for the demands it makes upon one's patience, and the homage it deserves from its slow tasting."I have used her recipe many times, and my guests become awestruck by the results. I cook the eggs even slower than she suggests (it takes me at least 45 minutes or even a little longer, when she recommends 30 minutes). You and your guests will never want to eat beaten scrambled eggs, ever again, after tasting MFK Fisher's version of this dish.If you ever cook, do read this book.

Everyone should take the time to savor this book's delights.

Published by Thriftbooks.com User , 24 years ago
Looking for some food for thought? How about some thoughts on food? M.F.K. Fisher's compendium of essays in the "Art of Eating" is sure to keep you entertained for months, and provide you with party tidbits for even longer. I read this book over the course of three months, an essay or two at a time. It's not just about food, but about the people who love to eat good food, to make it, to grow it, to harvest it, to travel in search of it. It's about some wonderful places in the world, some now long gone, or spoiled, and some still well worth a visit. You'll find that you remember some of M.F.K. Fisher's stories long after you've put the book down. You'll tell these stories to others and win smiles and laughter. You'll haul the book out and read aloud from it. Your friends will ask to borrow your copy. You will tell them to get their own.

An essential volume for anyone with an interest in food.

Published by Thriftbooks.com User , 24 years ago
"The Art of Eating" is actually an omnibus edition of five works by MFK Fischer, originally published separately. These are "Consider the Oyster," "Serve It Forth," "How to Cook a Wolf," "The Gastronomical Me" and "An Alphabet for Gourmets." The book succeeds marvelously on different levels: first, Fischer was an exceedingly knowledgable and experienced cook and eater. As such, her essays are good reads just for the wealth of information they contain on all facets of cookery and dining. Second, and more importantly, she was a woman of enormous humanity; a quality that informs each of the works in this volume. Her ability to crystalize in words the underlying cultural and emotional associations of food, cooking and the dining experience is probably unmatched by any other food writer since. Again and again, she manages quite deftly to use simple anecdotes from her life to illustrate the deep attachments we all have with the food we eat and how we eat it. Her delivery of these insights is seldom heavy-handed; often, she manages to delight the reader by use of unexpected but well-grounded conclusions. One would need to explore the culinary writings of poets and novelists to find her equal on the subject. There are drawbacks to the work, however. By gathering five different books into a single volume, a certain amount of repetition of some of her material becomes apparent. This is, of course, more the fault of the editor than of Fischer herself. No, Fischer's faults lie perhaps in a certain over-emphasis on the "sensitivity" of herself and her loved ones as contrasted with the rest of us Ya-hoos, and that she wrote before the emergence of American regional cuisine as a force in cookery, so that she sometimes denigrates things we feel more kindly toward today. In all, though, The Art of Eating is a book that no serious cook or diner can afford to do without
Copyright © 2022 Thriftbooks.com Terms of Use | Privacy Policy | Do Not Sell My Personal Information | Accessibility Statement
ThriftBooks® and the ThriftBooks® logo are registered trademarks of Thrift Books Global, LLC