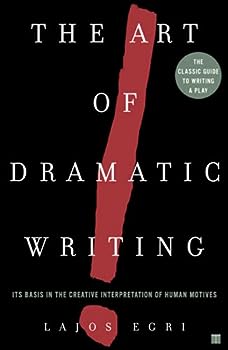 The Art Of Dramatic Writing: Its Basis in the Creative Interpretation of Human Motives

Learn the basic techniques every successful playwright knows Among the many "how-to" playwriting books that have appeared over the years, there have been few that attempt to analyze the mysteries of... This description may be from another edition of this product.

Published by Thriftbooks.com User , 15 years ago
I've easily read more than 100 books on creating fiction (my focus is primarily short stories and novels), and I've done so because I'm always interested in learning what others have to say about the craft that I might find ways to improve my own. I disagree with the reviewer who pishaws Egri's recommendation to create character biographies, saying that the "audience will never see them". The fact is, every short story, novel, play, movie is like an iceberg: what the audience reads/sees is only 10% of the whole. The rest is hidden. If a writer hasn't done her homework on a story's setting, background or, more importantly, on her characters' backgrounds, it will show, and in the worst way possible. Even if a writer is of the sort who develops her characters as she creates the story, there is still much about those characters which doesn't make it into the tale. It's rather like when you tell a cousin about a friend of yours. You don't give your cousin all the details, only those details which are relevant to giving your cousin an accurate, yet true, representation of your friend, but you can only accomplish this if you know your friend very well. The same is -- HAS TO BE! -- true of your story characters: you MUST know them very well (more than what you reveal) if you are to represent them to your audience accurately and truthfully (but not exhaustively), and that's precisely Egri's point. Regarding Egri and his agreements/disagreements with Aristotle, his disagreement with regard to a story's beginning has more to do with modern readers' interpretations of what constitutes a beginning. Every story must have a beginning, even if it doesn't appear on the page, on the screen, or on the stage. All the consituent parts of a story, even if they aren't put plainly before the audience, must be implied in what is. (Algis Budrys' WRITING TO THE POINT demonstrates this quite well.) Egri's disagreement with regard to Aristotle's views on plot/character, however, are, I believe, on the mark. In this case, however, the disagreement has more to do with historical/cultural/religious context. Aristotle's putting plot primary is due largely to the prevalent beliefs of his time, just as our putting character primary is due to the prevalent beliefs of ours. This, too, is a point which Egri recognizes. After reading Egri's book, my writing will never be the same again, I'll never read another novel or short story the same way again, and I'll never see a movie or play in the same way again, either. I dare say that I'll appreciate a good novel/short story/movie/play even more with the tools that Egri provides in this book, and will now be able to elucidate far more clearly than before why I didn't like a particular novel/short story/movie/play. In like manner, I now believe that I'm better equipped, after reading Egri's book, to recognize what is wrong with any story that I've written and will, therefore, be better able to fix the problem. After reading all the boo

I wish I had read this one first

Published by Thriftbooks.com User , 17 years ago
Well, I read this book recently after reading god knows how many screenwriting books. Some of them are quite repetitive aren't they?! The thing that I've found is that there are a lot of books out there that explain the three-act structure by saying you have a set-up, then you have your turning points, your climax, your resolution blah blah blah. Thing is we all instinctively know we need this stuff in our plays and screenplays but what's hard as a writer is actually figuring out what these should be. What makes a good turning point, what makes a good resolution etc? If you want to find out, I strongly suggest you read this book. I found this book (along with Robert McKee's 'Story') the most useful out of the many (screenwriting) books I've read because he gets into the nitty gritty hard stuff. He makes you think about how important the premise is. I disagree with some of the reviews of this book on this site that say that Egri says you have to know your premise from the outset, he doesn't say that, what he does say is that you have to know it clearly at some stage in writing your script and this is true because we go to films to find something out and all the pieces have to fit together or you'll say something like 'The second half of the movie dragged', 'Why did she do that? That wasn't in character' or 'The movie tried to prove too many points all at once' and so on. The more I write scripts, the more I realise that it's all about planning and architecture because pacing is everything unlike novels etc. In particular, the most useful takeout from this book is that your premise has to match your character and story. He goes into detail using 'A Doll's House' as an example. If Nora had been a different character, the resolution wouldn't have worked as well as it did and if the story happenings weren't chosen carefully based on her character, then the story wouldn't have rung true nor would we have understood what the premise is.The other thing that I think you'll really like is the stuff on conflict, the different types of conflict and when to use a particular kind of conflict for the story you wish to tell. I'm writing a script right now and this book encouraged me to be a bit more lateral and let go of the ideas I already had because they may not be the right situation for my main character or the story as is might not be the best vehicle for arguing the premise I want to argue. Brilliant stuff! Written so long ago yet still so relevant.

Published by Thriftbooks.com User , 20 years ago
Egri's work is the only contender that I know of to Aristotle's "Poetics" for a guide to what makes good writing Good. Throw in Joseph Campbell's "The Hero with A Thousand Faces" and you have a sort of holy trilogy and trinity for writers. I've looked at some writing computer programs (haven't bought any yet), and many of them use one, or all of these methods. As an aside, I'll also throw in Polti as a source for plot. Not because I think he's very good, but because he's popular.In Egri's world, character is king. Each of the characters, he states, must have a driving reason to be on stage, and their reasons must be diametrically opposed. In other words, they can't all get what they want - for one person to get what she wants, someone else must be deprived of their goal. Each character must also be desperate (desperate enough to be interesting) to get what he wants. (It's been a few years since I've read Egri, so please forgive my bad paraphrasing.)Using many examples (some familiar, some unfamiliar) he gives you the tools to analyze plays (and all stories), and (therefore, hopefully) write plays, or stories, or novels, or movies... My girlfriend and I, even years after reading this book can't walk out of a movie theater or playhouse without analyzing it using the methods we learned from Egri.If I were only able to reccomend one book to writers, this would be it. (Followed, of course, by Aristotle & Campbell). If I were to have all books erased from my memory and could only re-read one, this would be a strong contendor. If I could say only one thing to you, reader of this review, it would be read this book as soon as you can get your grubby hands on it.

My Bible for Writing

Published by Thriftbooks.com User , 20 years ago
Years ago my girlfriend and I were in the local book store. As budding writers, visiting a book store is as good a way as any to spend an evening. She was looking for a book on writing, and asked me to help her evaluate the myriad of books on the shelves. Even though she was the one looking to buy a good book on writing, I was the one who walked out with this book.For me, all writing falls into one of two categories - focused and revealing, or unfocused and confusing. Most books, and most books on writing fall into the latter category. The authors of these books haven't set up a criteria by which to judge words. Egri has. In this book he has deftly defined the craft of writing (play writing in particular, writing in general). By drawing a CLEAR line in the sand, he tells you what good writing is and should be.In science when you have two possible theories to explain something, you always throw out the more complex theory in favor of the simple. Egri gives you a simple formula. One which, upon reading, may have you wanting to throw out many of your other books on writing.Full of examples from plays both "of the times" and forgotten and classics, Egri describes what playwriting IS.The only other books I've read on writing that reveal as much as this (albeit shedding light on different aspects of the process) are:Stein on Writing by Sol SteinWild Mind by Natalie GoldbergThe Hero with a Thousand Faces by Joseph Campbelland though I haven't finished it, The Passionate Accurate Story by Carol Bly.On my shelf also are Heny Miller on Writing, and the Thirty Six Dramatic Situations (Gorges Polti).This distillation of the world of Drama is one that changed the way I view the craft of writing. I recommend it to those of you who are ready for the same.Contact me with your comments.

The Number One Playwriting Guide

Published by Thriftbooks.com User , 22 years ago
Lajos Egri's magnificent account and demonstrations of how to write a dramatic play is exciting and accurate. Citing master playwrites as Shakespeare, Moliere, Henrik Ibsen, and many others pointing out their high points and low points and how a play is to be constructed showing their commonalities among them. Starting at the root, and logically building up the story and characters to create a well developed play. Legri argues whether the action or the characters drive the play, it would seem the he believes that the characters are the driving force, however he also recognizes that they are one in the same, that a well developed character will alone create the action. Overall the book is presented well, easy to read and one will have a solid working knowledge to begin critiquing plays, as well as to get moving on their own stories. It would be advised to read the plays Legri refers to throughout the book, it will become more handy and points made clearer when he discusses those stories. Highly reccomended!
Copyright © 2022 Thriftbooks.com Terms of Use | Privacy Policy | Do Not Sell My Personal Information | Accessibility Statement
ThriftBooks® and the ThriftBooks® logo are registered trademarks of Thrift Books Global, LLC