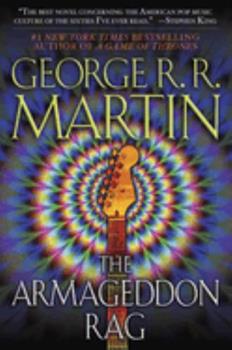 "The best novel concerning the American pop music culture of the sixties I've ever read."--Stephen King From #1 New York Times bestselling author George R. R. Martin comes the ultimate novel of revolution, rock 'n' roll, and apocalyptic murder--a stunning work of fiction that portrays not just the end of an era, but the end of the world as we know it. Onetime underground journalist Sandy Blair has come a long way from his radical roots in the '60s--until...

An overlooked classic tale expressing the zeitgeist of the 60's

Published by Thriftbooks.com User , 14 years ago
George Martin has written better books, but, perhaps, none closer to his heart. He lived through and participated in a number of the seminal defining moments of the 60's, and has recorded, as well as anyone can do, the pain and the glory of an era. He has presented, in a modern fantasy fiction format, the hopes and dreams of a generation, exalted; and the bitter disappointment when it all falls apart, and the dreams die. You don't have to have lived through the 60's in your youth to enjoy this book. It will give it a special frisson, but being human is enough.

Published by Thriftbooks.com User , 18 years ago
If a person can read this book without expecting it to be a Song of Ice and Fire Book, they will enhoy it. For some reason people i talk to that have read this book will say its not what they have come to expect from G. R. R. Martin! Well Duh! it was written 13 years before Game of Thrones and is about A rock band The Nazgul. So no, its not about winning the crown of the 7 kingdoms. It is however a facinating character driven story of a journalist/ex hippie trying to solve a ritualist murder of a music promoter of a band that has not played since their lead singer was assasinated on stage. G.R.R tells the story is an interesting way, as we follow Sandy the journalist around trying to get to the bottom of the mystery while finding out who he himself really is while visting his old hippie friends and seeing how time has altered their lives. Buy this book, put on some good music and enjoy the ride... (and for those of you that still want A Game of Thrones...There are some supernatural elements in this book) Relic113

Published by Thriftbooks.com User , 22 years ago
I've read this book many times since I first purchased the paperback I forget how many years ago,each time I enjoy it even more than the last time.My poor paperback is falling apart and is taped together in so many places. Martin creates a legendary band,surrounds it with believable characters and plot. I prowl through record and cd shops hoping oneday to see a Nazgul album.Maybe some day. If you loved the rock music of the late 60s and early 70s ,by all means read this book. I want a copy in hardcover this time.

Published by Thriftbooks.com User , 23 years ago
i read this book when it first came out and after that anything else was just "sloppy seconds" please tell the publisher to hurry up and reprint it so i can buy it and read it over and over!

Published by Thriftbooks.com User , 23 years ago
The main complaint I have with this book is the 'soundtarck' of songs doesn't play as you read it. I know the author has some copies of the limited edition of THE RAG for sale. Bantam has considered reprinting, but perhaps not until late 99 or early 2000.
Copyright © 2020 Thriftbooks.com Terms of Use | Privacy Policy | Do Not Sell My Personal Information | Accessibility Statement
ThriftBooks® and the ThriftBooks® logo are registered trademarks of Thrift Books Global, LLC