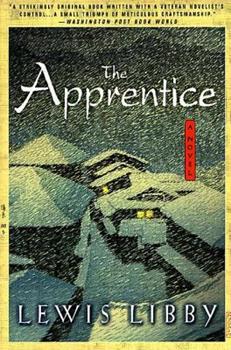 The Apprentice takes place in a remote mountain inn in northernmost Japan, where a raging blizzard has brought together wayfarers who share only fear and suspicion of one another. It is the winter of 1903, the country is beset with smallpox and war is brewing with Russia. In the flickering shadows of the crowded room, the apprentice, charged with running the inn during the owner's absence, finds himself strongly attracted to one of the performers...

Published by Thriftbooks.com User , 13 years ago
This was a very interesting book to read. I like to read certain books based on the season, so that I can relate better to the atmosphere the characters are in. I saw this one on my dad's shelf, looked at and read the front and back covers, and thought to myself that it might be a good read during the winter...and I was right!:) This story was written by an American author (former Chief-of-staff and National security advisor to Vice President Cheney & Assistant to President Bush...but, don't let that skew your decision to read the book! LOL:) and was set in a very cold, snow ridden Japan. You can tell this author did his research on (and perhaps even lived within) the culture and setting of his narrative. Without giving away too much detail, it's a story unlike I have ever read before. It has mystery, humor, romance, and action; all good elements to a great story. I found it to be quite intriguing, alluring, and well-paced, so much so that I could hardly put the book down. The author brought together some interesting characters and tied their lives/stories together well, even up to the very end of the book. There were no dissapointments. I hope this book fascinates you as it did for me. Enjoy!

Welcome to the Snow Country

Published by Thriftbooks.com User , 14 years ago
Judging this book on its representation of Japan is wrong. In fact, it's stupid. Japan is simply the setting. It's not a book about Japanese culture or the Japanese way of life, nor does it try to be. It's a coming-of-age love story wrapped in a murder mystery. The setting of this story enhances the distance, isolation, and timelessness of the tale. It could have happened anywhere to anyone. I've never been to Japan, and I certainly didn't feel like I've learned about Japan after reading the book. That's not the point. Once you clear your mind of this unnecessary mess, this book is amazing. Hard to put down and never boring, this book is a must read. As far as the weird stuff you may have read about - yeah, it's there. Not much, but it is there. If anyone other than Libby wrote this, these parts would have been seen as artistic and bold. But since it was Libby, he's creepy and a perv. It wasn't hard to see some reader's bias against this work because of the author. Don't let that dissuade you from a good read. I think if this book was written by someone other than Lewis "Scooter" Libby, people's thoughts would be different.

A Raging Storm of a Novel

Published by Thriftbooks.com User , 16 years ago
"On the edge of a ridge removed from the sea lay a small wooden inn half-buried in snow. Four hooded figures, grunting against the storm, struggled unbidden into its darkened entry. Snow whirled in around them, and the clouds of their breath were torn away." Not long after these opening lines of "The Apprentice" I, like the hooded figures, found myself torn away from my own reality and plunged into the mysterious world of a fascinating story. That, to me, is the test of a good novel. I would never have read The Apprentice had it not been for curiosity flowing from Mr. Libby's indictment in connection to the Valerie Plame affair. I approached it with trepidation because of the publicity focusing on its "erotic" aspects. Surprisingly, the most notorious of these are few and far between and, in my view, well within the context of the story. First novels frequently, if not always, say something about their writers: their hopes and dreams, their longings, clues to inward personas behind the masks we all display which conceal our real selves from the world. Here, amid a raging snowstorm surrounding an isolated inn in Northern Japan, a young man, the apprentice innkeeper, finds himself in a situation which seems almost beyond human ability to cope: the dangerous storm, strange guests of varying motivations, criminals perhaps, a bearded man who comes to the inn and flees, and a beautiful girl in a yellow coat who is part of the hooded four. The apprentice, as inexperienced with dealing with his sensual longings as with managing an inn in a bizarre emergency, rises to the challenge and doggedly sets out to handle the beyond-belief problems inherent in the situation. His judgements are not always correct and, depending on one's standards, his actions do not always meet the test of integrity. Yet he presses on. One is tempted here to see parallels to the Plame case when there may very well be none.Yet, aside from the politics of the moment, The Apprentice, is a gripping story set in a world of mystery and adventure most of us will never confront beyond the inns of our imagination. Mr. Libby's talent for description and suspense propels relentlessly to the surprising ending which leaves the reader breathless, like the hooded figures, and perplexed as to the engrossing meanings concealed within the raging storm of this intriguing story.

Published by Thriftbooks.com User , 16 years ago
I read this many years before I found out the author was also a political guy. This book has inspired me to see the world differently; Much the way a book by Deepak Chopra, Sylvia Brown, or Lynne Cheney might. (Now watch- it'll turn out Sylvia Brown is a senator one day!) In all of the reviews I have read, I am stunned at the reviewer's reluctance to allude to the training of girls involving the bear... It was a master stroke in devising one of the elemental states of both the characters and the world they inhabited. Pure genius. I feel badly for those who have not read this book, but I'm sure it will do very well for years to come.

One of the most unusual novels I have ever read...

Published by Thriftbooks.com User , 16 years ago
To begin with I'd like to say that I am a staunch democrat and despise the present government, their role in the Iraq War and sometimes can barely stand to even watch television without turning my face away in aversion when Bush and/or one of his cronies come on... I read "the apprentice" almost a year ago when the author had not yet become a name to be scorned. The prose in this book borders on the poetic and sustains a lyrical quality throughout..there are a lot of stark contrasts - the bestiality that a lot of readers have mentioned - the youth and innocence of Setsuo aka "the apprentice" - a snow-bound inn where the images of cold and winter are so evocative that I found myself shivering under the hot sun in the Caribbean (which is where I was reading it) - sake is consumed in copious quantities - SO MUCH that you start feeling languorous and soporific and are immediately drawn into the dreamlike haze that the book creates and maintains... This was a book unlike any other that I have ever read and I found the style, setting and plot exceedingly original and vastly diverting.... With space being limited in my house, my "library" is now stocked only with the "keepers" - "The Apprentice" is one of them...
Trustpilot
Copyright © 2022 Thriftbooks.com Terms of Use | Privacy Policy | Do Not Sell or Share My Personal Information | Accessibility Statement
ThriftBooks® and the ThriftBooks® logo are registered trademarks of Thrift Books Global, LLC