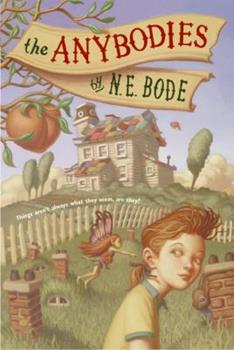 (Book #1 in the Anybodies Series)

"Potter-style magic meets Snicket-y irreverence." - People Magazine Fern discovers that she was swapped at birth and leaves her tragically dull parents for an unforgettable adventure with her true father, the Bone. Just who are the Anybodies? You'll have to read to find out Narrated by the hilariously intrusive N. E. Bode, The Anybodies is a magical adventure for readers of all ages.

Published by Thriftbooks.com User , 16 years ago
'The Anybodies' is a great fast-pace book about 270 pages long. I just finished reading 'The Nobodies' the sequel to 'The Anybodies.' For me, easy reading but a great book for it keeps you from dozing off..... With a few personal touches N. E. Bode grips your fascination and alertness forcing you to dive into the pages of it. Fern, Howard, The Bone, the Miser, and many other charaters have all in their own way a different style. After this book you will HAVE to get the next one. Happy reading!

Published by Thriftbooks.com User , 16 years ago
The main character in this book is Fern. She was switched at birth. She thinks she is a boring person called a Drudger. In truth, Fern is a Anybody and an Anybody can be Anybody she wants! Fern finds out that she has a special abitlity of shaking things out of books. Join Fern as we goes on a quest to find a special book at her grandmothers house. This book is important to her father. He must read the book to become a good Anybody again and he wants to teach Fern this as well. What did you like or not like about the book? The black and white illustrations through out the book were interesting. I enjoyed learning more about each character as I read. There are references to other classic children's books including Anne of Green Gables, Heidi, and The Series of Unfortunate Events. The story moved at a fast pace.

A quirky and fun-filled adventure

Published by Thriftbooks.com User , 16 years ago
What do you get when you add a sprinkle of magic, a twist of mystery, and a slew of colorful characters? Welcome to the world of THE ANYBODIES! First, we meet eleven-year-old Fern Drudger who is trapped in a rather dull life with her tragically boring parents. Mr. and Mrs. Drudger are both accountants at a firm called Beige and Beige. They enjoy dull things only: toasters, sponges, and refrigerator magnets. Fern, on the other hand, is different from her parents. She loves books and writing in her journal. Fern is anything but dull and has had some unusual things happen to her. As a toddler, she filled her room with crickets when she was looking at a picture book. And once, when she was learning to read, she caught snow that turned into words. She made the words into a curious sentence: "Things aren't always what they seem, are they?" And more recently, the strange events have increased. Fern observes a nun turn into a lamppost, and then during her swimming class, she sees a bat become a pile of marbles! Fern can't tell her dull parents about these strange sights. They already think she has an "overactive dysfunction" --- an imagination! One day, Fern's boring world is interrupted by a shocking surprise. Mary Curtain, the hospital nurse who delivered Fern, arrives in tears. She tells the Drudgers that there's been a horrible mistake. Fern is not a Drudger after all! She was switched at birth with a boy named Howard. Howard is with the nurse as well as a man, Fern's father, who calls himself the Bone. A quick decision is made --- Fern will go with the Bone for the summer and Howard will stay with the Drudgers. As soon as Fern leaves with the Bone, her adventure begins. You see, the Bone is not like the Drudgers in the least. When Fern gets in the car with the Bone and the nurse, she realizes that her summer will be anything but boring. She learns that the Bone and her mother are Anybodies --- people who can turn into practically anybody. Anybodies can also use hypnosis and deep concentration (mixed with a third "something else") to help other people become better versions of themselves. Fern also is told that her mother (who sadly died during childbirth) was a natural Anybody and learned it all from a special book called THE ART OF BEING AN ANYBODY. The Bone, on the other hand, was not as skilled, which Fern soon witnesses from a slew of his hypnotizing mishaps. The Bone also tells Fern about the Miser, an Anybody who has gone bad, and the Great Realdo, the most powerful and heroic Anybody of all. The Bone hopes that Fern has inherited some of her mother's Anybody powers. He needs her help for an important mission --- to find her mother's special book, THE ART OF BEING AN ANYBODY, before the Miser can get his hands on it and use it for evil doings. THE ANYBODIES is a fun-filled adventure that mixes elements of many of today's popular books. Similar to Lemony Snicket, author N.E. Bode uses the first person to tell the tale and mixes it in with

Published by Thriftbooks.com User , 17 years ago
So, on a whim, I picked up this book to read while on vacation. Fortunately (and unfortunately) it didn't make it that far. Fortunately, because it was one of the wittiest books I've ever read. Unfortunately, because I didn't have another book to read on the trip. The characters are all highly imaginative, and the author goes off on these little tangents about his or her writing instructor that are absolutely laugh-out-loud funny. It's great to find a book out there where you feel for the characters and where you can't wait to find out what's going to happen. It's also great to have such a book have such clean language. Please go get the book...You won't regret it. (...)

Any age will love The Anybodies

Published by Thriftbooks.com User , 17 years ago
Like the best of young reader literature, which is referenced liberally in this charming tale of eleven-year-old Fern's discovery of her real family and her extraordinary powers, The Anybodies is a pleasure for young readers and adults alike. I bought it because it's a Book-of-the-month selection, and I meant to give it to friends with kids aged 10-13. But then I snuck a peak and I was hooked. Fern grows up learning to ignore things like bats turning into marbles and nuns turning into lampposts because The Drudgers, her parents, are accountants and wouldn't understand that sort of thing. But of course, this is a story where things aren't always what they seem (it tells you so on the cover!) and The Drudgers aren't her real parents at all. Soon Fern is whisked away by her father, known as The Bone, and she discovers powers she inherited from her grandmother and mother, which include shaking characters out of books. And there are other surprises, too...Fern's a spirited and sweet heroine, and you root for her all the way through this thrilling adventure.
Trustpilot
Copyright © 2022 Thriftbooks.com Terms of Use | Privacy Policy | Do Not Sell My Personal Information | Accessibility Statement
ThriftBooks® and the ThriftBooks® logo are registered trademarks of Thrift Books Global, LLC