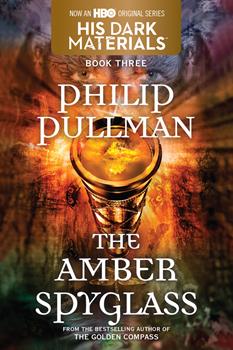 HIS DARK MATERIALS IS NOW AN HBO ORIGINAL SERIES STARRING DAFNE KEEN, RUTH WILSON, ANDREW SCOTT, AND LIN-MANUEL MIRANDA The unforgettable His Dark Materials trilogy that began with The Golden Compass and continued with The Subtle Knife, reaches its astonishing conclusion in The Amber Spyglass. These modern fantasy classics have been hailed by Entertainment Weekly as an All-Time Greatest Novel and Newsweek as a Top 100 Book of All Time Throughout the...

Published by Thriftbooks.com User , 14 years ago
Philip Pullman's "His Dark Materials" trilogy may be suffering somewhat from the lackluster film adaptation of "The Golden Compass," but there's no denying that Pullman's three books are among the best novels the fantasy genre has to offer. With "The Amber Spyglass," Pullman brings his series to a shattering conclusion as Lyra and Will fight in the war that has been building for thousands of years. While angels, witches, specters, and creatures from various parallel worlds kill and die, Lyra and Will struggle for the most basic and critical of prizes - love and mastery of one's destiny. There are too many plot twists and surprising developments for me to attempt to summarize the story in any greater detail. Suffice it to say that some villains are redeemed, some heroes lose their way, and that Pullman never panders to his readers. This is not one of those books that builds to a cliched ending that has everyone standing happily together at the end, a la the medal ceremony from "Star Wars Episode 4: A New Hope," where everyone gets cheered after the Death Star blows up. This is a more complex, subtle tale, and don't be surprised if you shed a few tears as Lyra and Will complete their journeys. This is a wonderful series that any parent can feel good about giving to their child - or reading themselves. This is intelligent, deep stuff. Yes, yes, Pullman has had the audacity to write an allegory about religion, but his strong opinions shouldn't scare anyone who enjoys the free exchange of ideas - very few ideas are as well-expressed as this. The only caution I would consider making is that these books can be a little scary, so you might want to think twice about letting younger kiddies get their hands on it. But judge that for yourselves. What a wonderful series.

Well worth the commitment

Published by Thriftbooks.com User , 14 years ago
I found that the final installment to Pullman's His Dark Materials series completed a well constructed plot, and incorporated scientific concepts into fantasy without actually feeling like science fiction. Despite the controversy, and I can see how this book can be considered quite heretical, the underlying idea is about the potential of the abusing power and the revolting that can emerge because of it. In contrast to many other allegorical tales intended to denigrate religion, Pullman was daring enough to name outright his antagonists as the Church and God. This bold stance tends to suggest a heretical viewpoint when misinterpreted as anything other than pure fiction. And to be honest, being familiar with the sciences discussed, if anything I would feel more inclined to be offended by Pullman's liberties with dark matter and quantum physics than the commentary on religion. Altogether the final book wrapped everything up in a pretty pink bow, and left me with a solid impression of the imaginative worlds Pullman created. The story was focused, well constructed, had many twists in plot, full of adventurous situations, and dealt with themes that ultimately impact not only man's consciousness but the entire multiverse. Although initially hesitant to commit myself to children's fantasy, I consider my time sitting behind these books as well spent and the combined series as one of the most memorable things read throughout the year.

Fitting end to a beautiful series

Published by Thriftbooks.com User , 21 years ago
Wow. I loved this book. Read it, buy it, treasure it forever, because that's what it is, a treasure. Each book in this series is, in fact, such a treasure. When I first read The Golden Compass, I had no idea what I was getting into. When I finished, it was all I could do to contain myself before getting my hands on and devouring The Subtle Knife. And now here is The Amber Spyglass, which takes everything the reader learned and gathered and hoped and wished about with Lyra - and then Will - in the first two books, and ties them all together. Such a satisfying end I could not have hoped for, or predicted! I wish I could shake Philip Pullman's hand. I wish i could tell him what a gift these books are! How many times I am going to read and re-read them i can't tell, but it will definately be numerous.And to to those of you who are getting all upset about the underlying christian message, etc.etc... why can't you have open minds? Everyone is entitled to their opinion, of course - it's just too bad that sometimes it prevents people from enjoying things like this book. And the sad thing is, those people will never be able to read this great book whole-heartedly.The Amber Spyglass made me laugh, cry, gasp, hold my breath, and, when i'd finally finished, realise that this was the perfect beautiful, sad, and above all, -right- ending to one of my favorite book series ever (no matter how much i wish it didn't have to end).

Published by Thriftbooks.com User , 21 years ago
There are two words that accurately describe this book. Awe-Inspiring. The whole book is a joyful rush of events that sweeps you up into a gigantic heaven-and-earth conflict yet inflicts incredible poignancy and tenderness. Not only does it surpass the previous two books, it adds new layers of complexity that will take a while to sort out.The book's plot is as complicated as the previous two books, yet at no time do we feel disconnected from the world(s) Pullman has created. Pullman's imagination has not yet run out of steam, and while we get new characters and an especially inventive new race (the mulefa), the best parts are the revelations about previous creation (Dust, daemons, etc.) Although the book is fast moving, occasionally it lets up and allows relaxation (the world of the mulefa; personally I loved this creation of his, a pre-technological world in decay). And in the background there is always the tension of Will and Lyra's ultimate fate: what will it be? There has been some religious criticism of the book. While its true that the book certainly doesn't give us a favorable view of the Church, and even of God, I personally feel Pullman reaffirms the existence of God and spirituality. the God depicted in the book is really a Satan; the true 'god' and the source of spirituality is Dust. And in the end we are revealed a beautiful, joyful, and spiritual world, where decay is being reversed, and spirit is once more standing tall.In the end, this book will definitely have some impact on you; hardly anyone can remain indifferent. I would urge any thinking person to buy this book (If you haven't read the previous two books, I suggest you read those first; it will ad to any understanding of this one). It is for anyone who wants to be awed.

Published by Thriftbooks.com User , 21 years ago
The Amber Spyglass, at its heart, seems to say that Christianity is a powerful mistake. Throughout the book, the Church is portrayed as evil, and even 'God' himself is shown to be a deceiving character, not the creator. However, the books are not rationalistic and materialistic in their outlook; they create a whole different theology cobbled together out of human spritual traditions. In fact, the book can be shown to be unconsciously Christian, and a beautiful reaffirmation of the greatest Christian values which we sometimes tend to forget. In our haste to 'follow the Bible' we sometimes forget who Christ was- a saviour to set Mankind free. Although Pullman has stated that he wanted to revel in the physical world, and intended this book as an alternative to CS Lewis' Narnia, there is an unconscious Christian thread running through the book. First off, has anyone wondered why, with 'christianity', there is no Christ? And that God is so weak? In reality the God shown in the book is not God at all, but a sort of Satan figure, an antichrist. He calls himself God, but as the angels tell us, he is not the creator. In reality, who is the creator, we learn? It is Dust. And in fact, there is a strong case for showing that Dust is God in this book (although this may seem absurd, bear with me for a while. While we think of God as singular, we think of Dust as plural. Just think of Dust as the essence of God).In the book, Dust pervades the world, and is the source of the greatest joys. Out of it were all things made. So, let us assume Dust is a sort of non-personal God. In the world, it is the source of spirituality. The Church is a institiution of fanatics, a distortion of Christianity. It is the false church set up by an antichrist. Now comes Christ. Who is Christ in the book? The answer is, Lyra. Her adventures have a very Christ-like feel to them: she frees the people to search for truth (Christ: 'the truth shall set you free'); she saves the world(s) from sin and fanaticism; she reaffirms the existence of love and the holiness of Dust; and she frees the dead to return to God in the world (to mingle with the Dust). As for the nature of this 'god', Dust. Too often we think of God as a human, only more powerful, wise, and kindly. Why does God have to be of this type? Can't God be a spirituality, a consciousness, a great and holy essence, that fills the world and clusters around those beings that are conscious? The history of our world, as Serafina Pekkala puts it, is "one long struggle between those who want you to obey and submit, and those who want you to stand tall and think". Only, the Church that we have viewed as Christianity had become corrupted by lesser men only a few hundred years after Christ. Those who are truly spiritual and call themselves Christian will find that they need not be tied down to the Bible always, and that consciousness is the greatest gift of all. Holiness is in thought, not in repeating words mindlessly. And this book is truly
Trustpilot
Copyright © 2022 Thriftbooks.com Terms of Use | Privacy Policy | Do Not Sell or Share My Personal Information | Accessibility Statement
ThriftBooks® and the ThriftBooks® logo are registered trademarks of Thrift Books Global, LLC