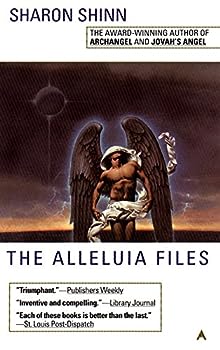 This description may be from another edition of this product. Legend has it that the Alleluia Files contain the truth about the god of Samaria. Now, a child raised in captivity among the angels will journey the length and breadth of her world to seek the...

Published by Thriftbooks.com User , 12 years ago
In this book, Shinn features her best leading male ever, Jared. He is a man with great power and responsibility...and he evades it at any cost to do...nothing at all. Even as news that will shake the very world down to it's core falls into his lap. He waits years to act on it, and even then he just tries pushing it off on the leading lady, Tamar, who is charmingly schizophrenic.

Marvelous conclusion to her Samaria trilogy!

Published by Thriftbooks.com User , 17 years ago
(The first two books are "Archangel" and "Jovah's Angel".) While I admit I preferred the first two books, this is no less brilliant. The shift from fantasy in the first book, to a melding of fantasy and science fiction in the second, to a predominantly sci-fi atmosphere in the third, is fascinating. Her imagery is beautiful, sweeping you up in the magic and wonder of her world and the music it is filled with. Her ideas are fresh, innovative, intriguing - I'd recommend her to anyone who is tired of traditional fantasy. I'd rather not give away the plot if you haven't read the first two because it would spoil the effect of the revelation. Worth reading and re-reading. Want more.

Great Conclusion To The Series

Published by Thriftbooks.com User , 19 years ago
This third and final volume in Ms. Shinn's Samaria trilogy takes place a hundred years after time of "Jovah's Angel". The society has become industrialized, and a surpressed dissident cult exists which believes that the god Jovah is actually an orbiting spaceship, and that proof of this was found in years past by the Angel Alleluia and later surpressed. Just to clarify things, although angels are main characters in these stories, they are not the heavenly, chubby-cheeked cherubim of greeting cards. They are flesh and blood beings, with all the foibles of humanity.Samarian society appears to be slowly coming full circle, from what the original settlers envisioned, to that which the settlers originally escaped. Power within the society is shifting away from the angels, and the Archangel appears to be pursuing an agenda of his own which appears to be in direct conflict with his predestined role within that society.This book tells the story of Tamar, a dedicated cultist, and the angel Jared who become uneasy allies in the search for Alleluia's truths. The Samarian society is once again richly detailed, and if you've been reading the series from the beginning you'll recognize the changes in lifestyle and attitudes that have taken place since the first book. Tamar and Jared are interesting, well-developed characters, initially mistrusting each other, but then coming to accept that their meeting was predestined by Jovah.

Published by Thriftbooks.com User , 21 years ago
I'm writing this just moments after finishing The Allelulia Files, with that satisfied feeling still running through my veins. This was truly a good book. I love Sharon Shinn's use of strong female heroines and for those who read Archangel and enjoyed it, there is a character of almost equal caliber in this novel. This book also contained interesting themes such as the reconciliation between science and religion and harmony with the environment and technology. There are some books out there that can captivate me from beginning to end and this was one of them. I found myself smiling as I read the book, and sighing when I finished the book. It left me with that wistful, that was such a great book,I wish I could read it once more and experience that sense of freshness again. Rereading a book is never as great as the sense of wonder and enchantment that comes with reading it for the first time. It reminds me greatly of the writing of Robin Mckinely, another author I admire. It reads like a fairy tale almost but it is so much more than that. The whole setting is unique and I have not come across anything so novel in any of the other science fiction and fantasy books I have ever read. I've already introduced it to two more of my friends who don't typically read books in this genre. They love it. Personally, I still believe that the first book was the best of all, but I greatly enjoyed Alleluia files as well.

Great Traditional SF in a Series Known for Romance

Published by Thriftbooks.com User , 22 years ago
This book is different than the other two but just as good. It focuses more on the ways technology changes society than on the romance and "secret mysteries" of the planet. The theme change may upset some people who were hoping to read the same book over again with different characters. Pay no attention to them. It's a very well done book, written in the same clear, vivid prose that made her other two angel books so great. The characters are no more poorly developed than in a lot of other SF, and this book is clearly meant to be more traditional SF. Appreciate it on its own terms rather than comparing it to its predecessors and you will not be disappointed.
Copyright © 2020 Thriftbooks.com Terms of Use | Privacy Policy | Do Not Sell My Personal Information | Accessibility Statement
ThriftBooks® and the ThriftBooks® logo are registered trademarks of Thrift Books Global, LLC