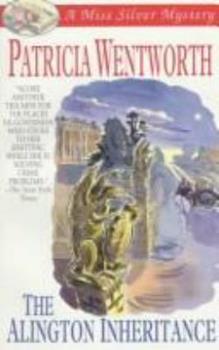 This description may be from another edition of this product. Another classic case for retired governess turned private detective, Miss Silver. A young girl learns that she has inherited an estate, but her distant relations plan to cheat her out of her...

Miss Silver in a thriller about identity and inheritance.

Published by Thriftbooks.com User , 15 years ago
As has been pointed out, this is not a very typical Miss Silver outing. For one thing, Miss Silver is a peripheral character at best. She appears late in the book and functions more as a kind of guardian angel for the main character than really as a detective. This makes sense, because the other major deviation in this book is that it is not really a detective novel. There is no whodunnit, no examined life. The murder in the book is peripheral and the reader knows perfectly well who is guilty of the crime. It is the role of the detectives and authority to assemble the necessary evidence in time, and not to uncover new information. The Alington Inheritance is a very late Miss Silver (the second to last which Wentworth wrote) and so perhaps the structural peculiarities can be forgiven. It does not work as well as some of her more traditionally plotted books, but is still an enjoyable read. As always, Wentworth is best at the characters-- her small town characters are both charming and chilling, always believable. It is worth a read just for those little sketches. People new to Miss Silver will probably be better served by reading some of the earlier series entries. For established fans, The Alington Inheritance should make an interesting variation on a theme. Recommended.

Orphan to heiress - if she survives

Published by Thriftbooks.com User , 19 years ago
This isn't a typical Maud Silver story at *all*. She doesn't appear until chapter 23 out of 46, and while the characters don't know what happened, the reader *does* - the murder is "on camera", as it were. We know who, how, and why, and even where all the evidence is - the only question is, can the governess-turned-PI uncover it in time to avert disaster? Plenty of suspense in this one - the murderer killed the wrong woman, so the question is not only whether there'll be another death, but whether Maudie can clear the accused, who we know is innocent. We don't even have the usual tying-up-of-loose-ends scene between Maudie and one of her many disciples on the police force.Jennifer Hill's father, Richard Forbes, was lost on a mission in WWII before she was born, and her mother was injured during the bombing of London and died in childbirth without ever speaking again - so no one had any evidence that they'd ever been married, and Jennifer was raised by Miss Garstone, her mother's old friend. But Garsty didn't formally adopt her or get around to changing her will, and thanks to a hit-and-run driver, she never will. But while dying, she confides that Jenny's parents may have been married after all. (Garsty was afraid of losing the child to the Forbes family, so she never investigated.)Since Richard Forbes' estate - Alington - was entailed, it went to the late Colonel Forbes. While he was honest and would have set the record straight, his widow isn't: she cares only about her eldest son, Mac. (None of her maternal affection was left for her second grown son, Alec, or her two much younger daughters - all of it went to Mac.) Soon after Garsty's death and not having confided in anyone, Jenny overhears a conversation between Mac and his mother revealing that they knew about her possible legitimacy all along - and that Mac has just confirmed it, and plans to marry her to tie up his claim to the estate in case anyone else ever finds out.Jenny Hill (now Jenny Forbes) clears out fast, and shows signs of having enough gumption to tackle her own problems. It's disappointing that she promptly runs into a deus ex machina, and not in the form of Maud Silver's hard work - a long-lost cousin who enters the book just in time to scoop Jenny up and offer her a safe haven. It turns out not to be so safe after all, though, when a killer leaves a corpse with a broken neck on the heath nearby. Maud only comes in after the murder, engaged by the father of the accused - a self-righteous man whose only surviving child is terrified of him, and rather surprised at being believed rather than left to rot. Even then, it isn't Maud who finally reads the father the riot act, but another interested party.All in all, a pretty good book, but not what I'd call a mystery, since even the issue of how to prove the truth is just a question of whether Miss Silver can find all the evidence in time, rather than whether it exists or where it is.
Copyright © 2020 Thriftbooks.com Terms of Use | Privacy Policy | Do Not Sell My Personal Information | Accessibility Statement
ThriftBooks® and the ThriftBooks® logo are registered trademarks of Thrift Books Global, LLC