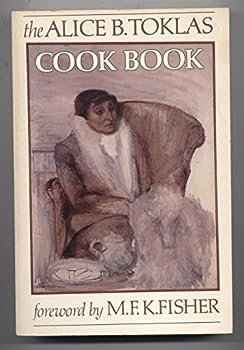 The Alice B. Toklas Cook Book

by Alice B. Toklas

Toklas's rich mixture of menus and memories of meals shared with such famous friends as Wilder, Picasso, and Hemingway, originally published in 1954.

Published by Thriftbooks.com User , 12 years ago
This cookbook was originally published by Michael Joseph, London, 1954, and that is the edition that you want. Why? Because all others have edited out Brion Gysin's (the cookbook spells it "Gysen") hilarious "Haschhich Fudge Recipe" on page 259, ("which anyone could whip up on a rainy day," as Gysin humorously noted.) There are other reasons for obtaining the original London First Edition -- there is so much history associated with this cookbook. Of course Toklas was the lifelong companion of the often controversial feminist author, Gertrude Stein. Toklas continued to champion her companion's philosophies and writings for 20 years subsequent to Stein's death in 1946. The two resided chiefly in Paris and they weathered two world wars, often living in occupied territory, an actuality which was particularly dangerous for Stein who was Jewish, (Toklas was a Catholic.) Regarding the history of the cookbook, these two ladies hosted many famous celebrities in their home where they were almost always fed by Toklas who prepared the high end meals in the household when guests were present. These people included Hemingway, Picasso, F. Scott Fitzgerald, Leonard Bernstein, Virgil Thompson, Carl Van Vechten, and a laundry list of similarly high-profile notables (I once made a count of over 300 of such associations.) Some of the very dishes that these people were fed are found in this cookbook. If you acquire the London First Edition try to obtain one with its original dust jacket. It was drawn by Sir Francis Rose and Toklas was not particularly pleased with the result as she commented to a friend which can be read in her post-1946 personal correspondence: Staying On Alone. Rose also completed the other illustrations in the cookbook. (Rose was later involved in some scandalous and nefarious affair which Toklas vaguely alluded to in her letters, the precise nature of which I have been unable to unveil to date, but I continue to research for this juicy tidbit of celebrity gossip!) If ever there was a scratch cook, it was Toklas. I believe that she truly "invented" more new dishes than any other cook I've ever heard of. In other cases of recipes found herein, she garnered them from small hotels throughout Italy, Spain, and France where her travels with Stein had taken her. These recipes are definitely not for the beginner and many of the ingredients are difficult to obtain. Thankfully, both Toklas and Stein were Americans and so she had the foresight to offer up American substitutions for obscure ingredients in some instances. It's nice to get a cookbook that you can read like a terrific novel and this is certainly one of those rare editions. It became a burden to Toklas as she trudged on with the project but, with the help and support of her many famous friends, she completed the task and now we can reap the benefit of her phenomenal culinary skills. Anyone interested in traditional French cooking will find this cookbook to be pure treasure. I should mentio

Published by Thriftbooks.com User , 20 years ago
I believe that this is one of the best French cookbooks of all time. Very old, traditional recipes explained in a way that makes even the more advanced ones seem doable. She also includes recipes from her youth in America and tells how she came across the recipe for Haschich Fudge. The stories interwoven are captivating, especially about the society she and Gertrude Stein kept, and their efforts during WWI as volunteers. In this respect it is a fascinating historical document. It is written as if she is speaking to you, and her speech is very blunt, to the point and quietly humorous. Very enjoyable to read.

Exquisite Recipes and Fun to read, too!

Published by Thriftbooks.com User , 21 years ago
Ive been cooking with _Joy of Cooking_ for a long time now. _Joy_ makes reference to a chapter in this book, "Murder in the Kitchen," as a sort of primer on how to 'murder' a carp in the kitchen before cooking. I decided, on a whim, to buy the book.I had no idea that having this new cookbook would be so rewarding!Alice Toklas has some INCREDIBLE recipes in here (Scheherezade Melon being a favorite!), all of which should be tried and enjoyed.Furthermore, this book contains recipes you simply wont find in other, newer, cookbooks. My girlfriend really summed this book up by suggesting that the recipes in this book are the recipes you know exist -- but are being passed from grandmother to granddaughter; you simply dont get these unless youre in that circle of people.This cookbook is your way in to exquisite dishes that were prepared for the likes of Gertrude Stein, Hemmingway, Picasso, and Matisse.That, and where else are you going to find a recipe for Hashish Fudge?This book has my whole-hearted, overwhelming approval.

Published by Thriftbooks.com User , 23 years ago
This classic of 20th century food lit appears every few years in new editions and rightfully so. First published in 1954 by Alice B. Toklas, the life partner of Gertrude Stein, established Alice as a writer in her own right and made her world-famous(once again) with her "Haschich Fudge" aka Alice B. Toklas brownies! This recipe, which was not included in the first American edition, but was included in the British edition, does appear in this book. It's more than a cookbook, it's an affectionate remembrance by someone who knew and was known by some of the artistic giants of the 20th century.

Published by Thriftbooks.com User , 23 years ago
2002 is Alice's 125th birthday, so why not get her most famous book and cook up a birthday dinner?!This classic of 20th century food lit appears every few years and rightfully so. First published in 1954 by Alice B. Toklas, the life partner of Gertrude Stein, established Alice as a writer in her own right and made her world-famous(once again) with her "Haschich Fudge" aka Alice B. Toklas brownies! This recipe, which was not included in the first American edition, but was included in the British edition, does appear in this book. It's more than a cookbook, it's an affectionate remembrance by someone who knew and was known by some of the artistic giants of the 20th century.
Copyright © 2020 Thriftbooks.com Terms of Use | Privacy Policy | Do Not Sell My Personal Information | Accessibility Statement
ThriftBooks® and the ThriftBooks® logo are registered trademarks of Thrift Books Global, LLC