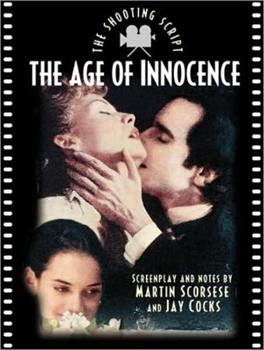 The Age of Innocence

by Martin Scorsese and Jay Cocks

The complete script of the five-time Academy Award? nominated film, with a lengthy introduction with details on the behind-the-scenes production, photos, and a special section in which the authors discuss the 22 films that influenced them. 24 b/w photos. The Newmarket Shooting Script Series features an attractive 7 x 9 1/4 inch format that includes a facsimile of the film's shooting script, as chosen by the writer and/or director, exclusive notes...

A perfect way of complementing the book and the movie

Published by Thriftbooks.com User , 12 years ago
Ever since I have finished reading "The Age Of Innocence" I have wanted to watch the movie. And when I did, I wasn't let down. The rendition was so faithful, so clever in nailing the main themes of the book (which is so much more than a nevertheless wonderful and unforgettable love story) that I was induced to look for some tangible witness of its coming to life. That's when I came across this book. I love Scorsese very much, but I didn't know he had participated in the realization of this written documentary of the movie, and I was pleasantly surprised. Full of pictures both from the set and from the time the story is set, it helps one understand a long gone world the movie strives to recreate. From the most intense scenes to the way of preparing a canvas back, you find yourself immersed in an atmosphere so close to the one you experience in Wharton's book that it is a pleasure to simply leaf through the pages and appraise every detail without haste. The complete script is also very useful to find out how the writers adapted the original, what they decided to alter, to leave out from the final cut, and what they kept faithfully from Wharton's words. If you liked the book and the movie, I highly suggest this purchase, if only to remind yourself now and then of a small joy you lived and you have maybe forgotten.

Published by Thriftbooks.com User , 14 years ago
I saved up to purchase this book and I could not be happier! What a gorgeous book- This is one of my all time favorite films and to have a book that includes the script is a real treasure. The text of how the movie came to be is one of the best parts of this book. Impressive in size and just beautifully put together- If this is one of your favorite movies, than you must have this book...you won't be sorry!

Fine script for an under-rated film

Published by Thriftbooks.com User , 22 years ago
Not being familar withe book, Scorcese and Cocks came up with a excellent film of class hypocrisy and repression. Well worth reading on its own right, hopefully this film will get the acclaim it deserves. Those that did like this film should also examine Kubrick's 'Barry Lyndon', a film which was one of Scorsese's main influence during the making of the film.

a glimpse into our heritage

Published by Thriftbooks.com User , 25 years ago
This book really can be called a "work of art". It includes some stunning pictures and paintings that later inspired the making of the film "The Age of Innocence". It's really an uncommon chance to glimpse into our own pictorial heritage, as seen through the eyes of one of America's most important filmmakers. Included is also the shooting script and a series of quotations from the period's writers that help in the building of the 19th century athmosphere. Strongly reccommended to the lovers of this film and to the ones who want to appreciate more and understand where the "inspiration" comes from. Massimo Benvegnu
Copyright © 2022 Thriftbooks.com Terms of Use | Privacy Policy | Do Not Sell My Personal Information | Accessibility Statement
ThriftBooks® and the ThriftBooks® logo are registered trademarks of Thrift Books Global, LLC