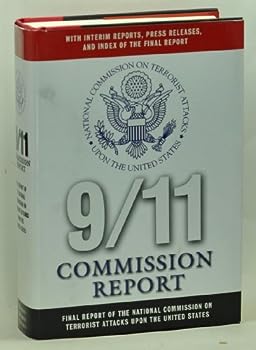 9/11 Commission Report : Final Report of the National Commission on Terrorist Attacks Upon the United States - With Interim Reports, Press Releases, and Index of the Final Report

In November 2002 the United States Congress and President George W. Bush established by law the National Commission on Terrorist Attacks Upon the United States, also known as the 9/11 Commission. This... This description may be from another edition of this product.

Published by Thriftbooks.com User , 13 years ago
This is the official authorized edition with Index and Notes entitled "Final Report of the National Commission on Terrorist Attacks Upon the United States" , also known as "The 9/11 Commission Report". This bi-partisan committee was established by Congress and President Bush in 2002 to address the facts and circumstances leading to the terrorist attacks against the United States on September 11, 2001, the actions by the government at all levels in responding to the attacks, recommendations going forward for the United States going forward to improve the ability of the Nation to prevent future terrorist attacks. This official account is the text I use in a 3-credit hour course at the University of Indianapolis, School of Adult Learning in a course called "Terrorism-The 9/11 Report". I recommend this text to anyone interested in knowing more about the 9/11 attacks but caution that many books have been written on this subjuct and so folks will have to do their own critical thinking on whether this book is the final authority on understanding how these attacks were able to happen and whether the actions on 9/11 as reported, capture the essence of both the attacks and the response, as well as whether the recommendations offered were appropriate and adequate for the U.S. going forward. The ten-person commission signed off on this final product without dissent, something of a major achievement, in and of itself.

Published by Thriftbooks.com User , 18 years ago
Compared with other similar endeavors (The Warren Commission Report and the Starr Report being obvious bad examples), The 9/11 Commission Report emerges as an important historical document. Even though some people might criticize because it gives off the impression that the attacks on September 11, 2001 were the fault of America's leaders and bureaucracy and not Al Qaeda, it presents the known, unclassified facts in a clear, concise and detailed manner. It is not mired in the typical legalese that makes similar documents useless for public consumption. While most partisan political types have focused on the Commission's recommendations regarding a reformulation of National Intelligence, the most compelling parts of this document are the detailed accounts of how the 9/11 plot transpired. Reading the accounts of the passengers on the four planes that crashed that beautiful morning are enough to fill any reader with sadness and anger. Also, reading these accounts shows just how remarkable (I do not mean this as a compliment but as an objective assessment of what it was they managed to do) a plot it was--especially given how they bypassed each and every defense mechanism the US had in place. The Report contains background information on the growth of Islamic fundamentalism in the Middle East throughout the 80s and 90s, giving context to the beliefs that lead Al Qaeda, and especially these 19 men, to do what they did on 9/11. We also learn that while both the Clinton and Bush administrations made the pretense of committing to a larger effort in against known terrorists, particularly Osama bin Laden, it comes off as a mere annoyance rather than the threat it ended up becoming. The Report is chilling as well as informative--portions of it read like a mystery novel. Its readability is particularly impressive. There are plenty of political points buried in here aimed at criticizing Republicans and Democrats--I've picked out a few of my favorites, but I won't pass them on. More importantly, this document--at least, at this point--stands as the definitive account of that horrible day in American history.

An Important Book for Everyone

Published by Thriftbooks.com User , 18 years ago
[...]I would also like to dispel two myths that I have heard recently regarding this report. The first is that "I've heard all this before." Well, no you haven't. There are quotes and details in this report that have not been released prior to this publication. They are fascinating and they put the Commission's recommendations in a better context. The second myth is that this is coming out now to influence the election. Again, I don't see how this is possible - there are damning findings that occurred under both Clinton's and the current Bush's watch. I have read many Commission Reports over the years and this is truly the most bipartisan, independently thought out commissioned Report I have ever read. There are no direct attacks on a Party or an ideology. Overall, this Report is written extremely well. It is written for everyone, not in bureaucratic doublespeak. It is clear, organized, and informative. I was pleasantly surprised by all of this. Although we've all heard bits and pieces of the background for this report, I had never seen it written in such an organized, chronological fashion before. The book begins with a Chapter entitled "We Have Some Planes." This Chapter, as well as a later Chapter - Heroes and Horror, are chilling and brought back many of the emotions I thought I had left behind. I read, as if for the first time, the concise details of each of the four flights that morning and the heroics of American citizens. Of course, we know how this part ends so the sadness, anger, and sense of loss return. The Report then does an amazing job of piecing together how NORAD, the FAA, the Control Center in Herndon, Virginia, and the Command Center in the Pentagon all attempted to catch up to the facts, parse them from the misstatements, and coordinate through each agency's chain of command to attempt action. What is incredible in reading this first chapter is how many times and places if just one, little thing were done differently, or one extra phone call were made, how differently things may have unfolded. I found myself shaking my head in disbelief at how close, and yet how far, the system was from avoiding the catastrophe ahead. After this, the reader learns more about Al-Quaeda, the rise of Usama Bin Laden, and America's initial responses to what was developing. There are successes and failures here, but so many warning signs were ignored that it almost boggles the mind. The Report also chronicles the response on the ground at the crash sites and the coordination (and lack thereof) among firefighters, police officers, and emergency medical technicians. Again, this brought back the pain but also the good feelings associated with reading about true American heroes on the scene. The overall analysis and recommendations of this book are for each reader to decide, with minds open, as to their feasibility and cost effectiveness etc. However, it is important in this section to go back and reread the introduction, wher

If ever there was a MUST READ, this is it...

Published by Thriftbooks.com User , 18 years ago
The attacks on the United States now collectively termed the 9/11 attacks was the most devastating attack by foreign nationals on American states since the War of 1812, with far greater loss of life than then. In many ways, it was a Pearl-Harbour event, in that the history of the United States was changed in ways that make pre-9/11 and post 9/11 common terminology. In the aftermath of the attacks came many things, and developments must continue; this particular book is one of the most significant outcomes. Within a month, there were calls for an independent bipartisan group to look into the matters. Led by Republican Thomas Kean and Democrat Lee Hamilton (former Congressman from Indiana, the state where I live), the Commission as a whole presents this report as a unified document, without dissent and without addition. That makes it rare in the annals of political writing. The Report itself contains many things: A preface, thirteen chapters of historical narrative, situational analysis, and recommendations for further action, notes, staff list -- 585 pages in all (there is an executive summary available also, but not incorporated in the body of the text). The historical narrative looks at previous Al-Qaeda terrorist activity, at home and abroad, as well as actions by the United States designed to counter this (embassy security, bombing in the Sudan, etc.). While many were aware of embassy bombings and the previous World Trade Centre attack in 1993, probably few people are aware of other foiled attempts -- Ramzi Yousef's plot (out of Manila) to blow up airliners flying over the Pacific. The panel interviewed both the current President and the former President. They actually do address the Lewinsky affair in the text, but only briefly. They conclude that there was no 'wag-the-dog' syndrome going on with regard to the timing of Clinton's actions, but that the distraction of this affair did nothing to promote good government. The Commission addresses the issues of communication and cross-agency cooperation (still at a poor stage), politics and security failures at every level, and recommendations for future action. The question becomes -- does the White House, Congress, the military and the civilian agencies involved in security have what it takes to implement changes? The Commission's report is presented as a unanimous document; Democrats might not want to hear that the relatively-liberal Lee Hamilton is in favour of the general tenets of the Patriot Act, whereas Republicans might not like the governmental control aspects that relatively-conservative Thomas Kean supports. Terrorism was a minor issue pre-9/11; neither the Clinton nor Bush administrations held it as a high priority. It is destined to remain one for the foreseeable future. No one imagined the capabilities of bin Ladin and al Qaeda as being what they were; this has changed now, too, but the Commission asks, are we reacting (how many terrorists are actually going to
Trustpilot
Copyright © 2022 Thriftbooks.com Terms of Use | Privacy Policy | Do Not Sell My Personal Information | Cookie Preferences | Accessibility Statement
ThriftBooks® and the ThriftBooks® logo are registered trademarks of Thrift Books Global, LLC