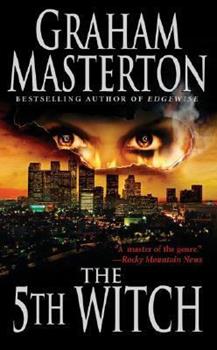 A crime cartel is using four witches to hold L.A. in a grip of fear. No one can stop them?except the 5th witch!

Published by Thriftbooks.com User , 12 years ago
The Craft is once again foremost in a great supernatural tale spun by the Master of Horror and Suspense.True Horror in my view, since the element of the Supernatural is so very evident as the story events become weaved with the world of the Detective whose life was changed by a car accident. Masterton once again crafts extreme violence, sensual and maybe malevolent sex and sensuality, with Supernatural themes that intertwine with the world of politics. Each step is so carefully crafted to give the best scare, and yet also tell a great story. Masterton is in fine form in this work. This story would make the coolest Horror film, and its practically script ready.If you loved MANITOU BLOOD, or NIGHT WARS, then the Masterton fan will be more than happy with this work.

Of crime and covens

Published by Thriftbooks.com User , 13 years ago
If you read as much horror as I do, you can get a been-there-done-that sort of feel for the genre. Even if a book is good, it often feels a lot like others you've read. That's why it's always nice to experience a book that is a bit different. Graham Masterton's The 5th Witch is a little different from the typical novel, and that goes a long way to making up for any shortcomings the book may have. Essentially, this novel is a blend of horror and gangster story, with a trio of vicious Los Angeles crime bosses working with witches to take over the city. How powerful these witches are can be seen even in the first chapter, where one of them makes three cops spontaneously combust and makes an informant drop dead of a heart attack. Detective Dan Fisher becomes a quick believer when that same witch makes him vomit up a bunch of quarters. Unfortunately, he has a hard time convincing others, which will lead to the deaths of many policemen. The crime bosses and the witches are essentially invulnerable to any police tactics. Dan, however, is spared for some reason. While a fun read, this book is not without its weaknesses, starting with Dan himself, a rather routine hero. He is a widower, having lost his wife in an accident and now he drinks a lot (although any alcoholism traits seem to be ditched early on in the novel). Fortunately, he has a neighbor who not only is young, beautiful and attracted to him, but also happens to have a keen understanding of the supernatural that will offer an opportunity to stop the three witches and the shadowy fourth witch that is a focus for their power. (As for the fifth witch, you'll need to read the book to understand.) Also, it's never quite clear why the witches work with the mobsters, or for that matter, why the mobsters concern themselves with acquiring money when they don't need it; whatever they want, they can take. Masterton is a seasoned writer, however (he's published over 70 novels), so he can still make a rather original novel even with a few cliches and plot holes. Despite its problems, The 5th Witch is good enough to merit a solid four star rating: it's not the best of horror novels, but it is a good book.

Published by Thriftbooks.com User , 13 years ago
I have a love/hate thing going on with Graham Masterson--when he's good, he takes you to another place, a new plateau where time ceases to exist, example--for me, EDGEWISE, a great little book!! But when he misses the mark, it's bad. Friends, THE 5TH WITCH is awesome!! The crime lords of Los Angeles have discovered a new and exciting way to avoid the annoying trials and tribulations of local law enforcement from enfringing upon their turf--witchery!! There are four wickly seductive witches and each crime boss lays claim to one of them. The four witches are part of an intensely powerful coven that is governed by a fifth witch that dates back to the 1700's. The hero Detective Dan Fisher is wonderfully flawed. Three years earlier, he was driving home from a wedding with his fiancee,they crashed and she died. He has never fully recovered from this, continuing to blame himself for her death, to the point that her ghost has started visiting him at night, seducing him and leaving bizarre messages. Or is it really her? Add to the mix, Dan's next door neighbor Annie who just happens to be a pretty darn good witch herself. And Annie seems to want to help put a stop to the reign of terror that is spreading like wild fire. Or is she? That is the fun of THE 5TH WITCH!! Nothing is quite like it seems. Masterson has put a lot of time and research in the details and it makes the meat of the story feel authenic. Also, I loved the way that each of the witches were from a different ethnic backgrounds and their magick spells and practices reflected that. All in all, I loved this book. I had a hard time putting it down. I just wanted to keep on going and isn't that a sign that the writer has down their job well? So, I would really recommend THE 5TH WITCH!! Just walk very soft after doing so. You never know who or what may be lurking about and you don't want to tick them off:)

Published by Thriftbooks.com User , 13 years ago
Dan Fisher, a Los Angeles detective is about to have his world turned upside down. The city of angles is being taken over by the three most dangerous drug lords around, and they have new girlfriends that can make you do anything from puke toads and worms to having hundreds of S.W.A.T men ripped to pieces by monsters. Now Dan must find a way to beat them before they take over the whole city. This is where his neighbor Annie comes in. She a a low level witch and that may be what Dan needs to get the job done. But Annie might now be all that she seems to be either. I have always loved reading Graham Masterton, he is a great writer and storyteller. The only down side is, i whip through his book within a day and am left wanting more. I give the 5th Witch 7 sculls on the shiver scale. A very fast read.
Copyright © 2020 Thriftbooks.com Terms of Use | Privacy Policy | Do Not Sell My Personal Information | Accessibility Statement
ThriftBooks® and the ThriftBooks® logo are registered trademarks of Thrift Books Global, LLC