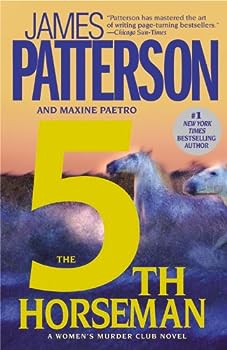 This description may be from another edition of this product. Dare to face the most terrifying heights of suspense. From hospital murders to explosive court battles, the Women's Murder Club takes on their most harrowing challenge yet. It is a wild race against...

I love this series!!

Published by Rachel W. , 1 year ago
Thrilling book that keeps you on the edge of your seat. Graphic and suspenseful while still tastefully written. Reading 7th Heaven now and just purchased 8-18. If you need a book or series that keeps you engaged and hooked, you have to read this. Guarantee you will buy the next book in the series.

Published by Tedibare , 2 years ago
Came in on time and is in great condition. I am very pleased with my purchase. I would recommend if you want a good book in good condition and at a great this is the place to go.

The Fifth in the Series is Just What You'd Expect

Published by Thriftbooks.com User , 15 years ago
As you might guess from the title, this is the fifth book in the Woman's Murder Club series. The legion of fans that have developed for this series will not be disappointed. I'm not going to divulge the story here, except to say that the deaths are mysterious, the people at the hospital are a mix of hard working professionals and administrators who care a lot more about their public image than they do the dead people, the court battles have their surprises. Great Literature, no. Will it be studied for three centuries like Shakespeare is, no. Is it a good way to spend an airplane ride or a rainy weekend. Absolutely.

Published by Thriftbooks.com User , 15 years ago
Lindsay, the police lieutenant, and Claire, the medical examiner, are working the 'car' cases....young murdered women are dressed in expensive clothes and left in expensive cars. The guys (what a pair!) who are doing this and the way they murder the girls form this part of the story. Of course, Lindsay nails the killers. Cindy, the reporter, and Yuki, the lawyer, are sitting in on a trial--a class action suit by survivors of patients who died at a major San Francisco hospital. All the patients were in for non-life threatening problems and never made it home. One doctor in particular is suspected of altering medications and causing the deaths. Lindsay gets involved in this case as well, untangles the mystery and eventually gets the culprit. True to Mr. P's style, this is a quick, intriguing read. And, yes, his usual surprises are included. If you're a James Patterson fan, don't miss this one. The Women's Murder Club stories are getting as good as the Alex Cross stories

Published by Thriftbooks.com User , 15 years ago
Patterson has done a great job again. The story keeps you glued to the CD and begging for more. The reader does an excellent job with inflection and characters. It is long, but I never once considered not finishing it. The characters were rich in depth and fascinating. I highly recommend this CD.

Published by Thriftbooks.com User , 15 years ago
Keiko, the mother of the newest member of the Women's Murder Club, Attorney Yuki Castellano collapses and is rushed to San Francisco Municipal Hospital. Apparently, Keiko has had a Transient Ischemic Attack, but seems to be recovering. After accompanying Yuki to the hospital, Police detective Lindsay Boxer goes home only to learn later that Keiko suddenly and unexpectedly died. A stunned Lindsay soon learns that the municipal hospital has been a place where too many recent deaths have occurred due to incorrect medication given to patients. Keiko apparently is the latest lethal mistake. Lindsay thinks a warped "angel" of not mercy is killing people just prior to their leaving the hospital. Though her plate is filled with an investigation into the "Car Girls" serial murders, she vows with the help of her Women's Murder Club members to take down the hospital killer. THE 5TH HORSEMAN is a terrific suspense chiller that starts off at hyperspeed with Keiko's collapse and subsequent death and picks up speed as beleaguered cop Lindsay struggles to stop two apparent serial killers. The story line is action packed as is the trademark of the series (and any work including collaborations that James Paterson writes) while the female members of the Women's Murder Club retain their individual personalities that make them seem genuine even while being super crime stoppers. Harriet Klausner
Copyright © 2020 Thriftbooks.com Terms of Use | Privacy Policy | Do Not Sell My Personal Information | Accessibility Statement
ThriftBooks® and the ThriftBooks® logo are registered trademarks of Thrift Books Global, LLC