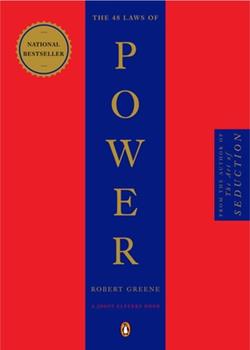 The 48 Laws of Power

Amoral, cunning, ruthless, and instructive, this multi-million-copy New York Times bestseller is the definitive manual for anyone interested in gaining, observing, or defending against ultimate control - from the author of The Laws of Human Nature. In the book that People magazine proclaimed "beguiling" and "fascinating," Robert Greene and Joost Elffers have distilled three thousand years of the history of power into 48 essential laws by drawing from...

A book that will change the way you look at the world.

Published by mikayakatnt , 19 days ago
A book worth reading and rereading. Best to learn the lessons so they aren't used back against you. After reading this book you'll start noticing some of the laws being followed and broken in all different aspects of life, society, and politics.

THE 48 LAWS OF POWER: YOUR THINKING WILL NEVER REMAIN THE SAME

Published by Thriftbooks.com User , 17 years ago
Read this book and your thinking will never remain the same. Drawing upon historic examples that portray man's journey through the ages as one long, unending quest to dominate his fellows, The 48 Laws of Power reads somewhat like a much expanded version of Machiavelli's The prince. Yet it carries a lot of its own originality - on many levels. One interesting, innovative feature of this book can be found in the numerous illustrations and anecdotes appearing along the page margins that the writer uses to buttress his points. Quite educative, they provided me an easy opportunity to browse through and be acquainted with fascinating classic literature from Aesop's Fables down to Sun Tzu's The Art of war. Can we refer to the 48 Laws as success literature? Some of Robert Greene's advice seems innocent enough: Never outshine the master; win through your actions, never through argument; concentrate your forces; enter action with boldness. These are tips you would find in any self-help book that should put anyone on a stronger footing in the workplace with their boss, with colleagues, or even within the curious context of a romantic relationship. But there is a darker, more sinister side to the 48 Laws, a side that appears to be responsible for all the notoriety that surrounds this book. There are laws which, seeming to controvert themselves in some instances, advocate underhandedness and the practice of outright evil in the pursuit of one's ambitions. Reading The 48 Laws awakens a moral conflict within us and presents two philosophies that attend the attainment of power - one inspired by goodness and the other governed by guile. But I think it all depends on the kind of success you seek. To those that would stoop to guile I would point out that Robert Greene has neglected to include what perhaps might have been the first law: All that goes around comes around; you reap what you sow. On the other hand, some of these laws that appear to advocate evil - taken in the right context, they shed their malicious intent and turn out to be very helpful, well-meaning principles. For instance, I agree with the thought `So much depends on your reputation - guard it with you life'. But I think my reputation rests, more than anything, on my character and commitment to whatever I do, and it is along these lines I will seek to guard it. Also, when I think of `Make other people come to you - use bait if necessary', I tend to see it in the light of the principle that pronounces: The kind of person you are, to a large extent, determines the kind of people you will attract into your life. So I go about developing my `bait' - myself - in the best way I can. Fishing, as opposed to hunting, one success writer calls it. An anecdote which fascinated me and which I kept returning to was one about Cosimo de Medici, the 15th Century Florentine banking magnate, who rode a mule instead of a horse and decidedly deferred to city officials, but effectively controlled government policy

A Wonderful Tableau Of The Historical Exercise Of Power

Published by Thriftbooks.com User , 21 years ago
Coming from a strong Christian upbringing, initially I found the idea of this book frightening. The only title I've read that seems more ostentatious is _How To Become CEO_, by Jeffrey J. Fox.As I read the book, I was fascinated by the diversity of the historical examples provided. There are historical examples ranging from Thomas Edison to Michelangelo; from Genghis Khan to Harry Houdini. I demur from some of the reviewers of this item, in that I enjoyed it immensely. I did not expect to get a roadmap about how to plunder and pillage my way to be King. I expected a sharply presented discussion on the dynamics of power, and I was not at all disappointed--in fact I was thrilled.Disagree with the author if you must, or better yet, take a tour through the tales of past triumphs and failures in the exercise of power. Colorful fables, quips, and quotations abound and are presented tastefully. I've not thoroughly enjoyed a book this much in quite some time!

A Fascinating, Yet Dangerous Book

Published by Thriftbooks.com User , 23 years ago
This is one of the best books that I have ever read. Unfortunately it is also one that can easily be misunderstood or misused. First let me say what the book is. The book is a guide to amoral methods of gaining power. It gives 48 different "laws" to use to accomplish that. The 1st misunderstanding of the book is purely the fault of the authors. "Laws" is very misleading in this case. "Strategies" works much better, but isn't quite as marketable. Anyone who tries to follow all 48 laws simultaneously all the time will be sorely dissapointed. The book will not make you an expert power player. Yes, the book does contradict itself, but in real life different strategies are needed in different situations. It's still up to you which ones to use. This brings me to the next point. Yes, the book is a distillation of many great masters of power. And, as with any distillation, the end result is not as good. But the simple fact is that the great masters are fairly difficult and boring to take straight. The book is best used almost as a primer course. It makes reading the actual texts by Machiavelli and Sun Tzu much easier. Next, the book does not advocate the use of these ideas. It does not say "Here, everyone should do this." In fact, in expressly says that these laws are not right for everyone. Those who morals tell them not to act this way, shouldn't. The book is a study of strategies for gaining power which have worked for those in the past. The book also does not advocate any particular use for power. It does not say that one should gain power for its own sake, or that one should gain power to help others. It just says that if you want to have power, here are some ways to do it. It's up to you how to use the power. The cold, hard truth is that the methods described in the book do work. Every major wielder of power in history has used some of the rules to get that power. Gandhi was a master of the use of power - Law 6 "Court Attention At All Costs", Law 8 "Make Other's Come To You", Law 9 "Win Through Your Actions", Law 16 "Use Absence to Increase Respect." These were all methods used by Gandhi to take power from the British. The most important law in my opinion is Law 19, "Know Who You're Dealing With, Do Not Offend the Wrong Person." The person who does not treat the methods in hear with the proper respect and uses them rashly will violate this law over and over. The wise reader, however, will take Law 19 to heart and learn when to and when not to use the strategies, The laws themselves are neither moral nor immoral. How they are used defines their morality. I found the book to be a wealth of ideas and examples of what works and what doesn't work. The immorality of many of the laws is balanced by the fact that the more immoral your course of action seems, the more likely you are to violate Law 19. I recomend this book on many levels. It is a fascinating study of power, and
Trustpilot
Copyright © 2022 Thriftbooks.com Terms of Use | Privacy Policy | Do Not Sell or Share My Personal Information | Accessibility Statement
ThriftBooks® and the ThriftBooks® logo are registered trademarks of Thrift Books Global, LLC