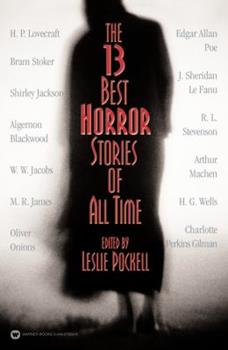 The 13 Best Horror Stories of All Time

The stories that comprise this collection will surprise the reader even after numerous readings. They reflect innermost fears and head for spaces where reality is blurred by imagination, where insanity and madness are shrouded in mystery and where humanity is haunted by repressed passion and obsession.

How can you pick only 13 of the best horror stories?

Published by Bayou Boy , 1 year ago
One of the problems with an anthology like this one is that you are not guaranteed at all to get fresh stories. After all, it is advertised as the best horror of all time. Of the 13 stories, I had already read 5 of them and if you read a lot of horror stories you will run into the same problem. Having said that, the 13 that were selected are, in fact, some truly great horror stories from some of the masters of the genre. I would recommend this book to someone that is just starting to read horror (NOT children, however) as it would be a good way to get someone to read the cream of the crop and then decide who to continue reading after that.

Published by Thriftbooks.com User , 11 years ago
"The 13 Best Horror Stories of All Time" compiles true classics of the horror genre, though I would have preferred a larger compendium with more works. The tales included here are atmospheric, dark, and macabre. It makes a great introduction to the classic horror genre (note: not the gore-fest that is so characteristic of latter day works of horror) especially for those beginning to explore the genre, and also for adolescent readers. I have used many of these stories in my Language Arts classes and received favorable responses. The tales represented here are: The Tell-Tale Heart by Edgar Allan Poe Green Tea - by J.Sheridan Le Fanu The Yellow Wallpaper by Charlotte Perkins Gilman The Bottle Imp by Robert Louis Stevenson The Great God Pan by Arthur Machen Dracula's Guest by Bram Stoker The Monkey's Paw by W.W. Jacobs Oh, Whistle and I'll Come to You, My Lad by M.R. James The Country of the Blind by H.G. Wells The Willows by Algernon Blackwood The Beckoning Fair One by Oliver Onions The Call of Cthulhu by H.P. Lovecraft The Lottery by Shirley Jackson Amongst my favorites in this collection are M.R. James' Oh, Whistle and I'll Come to You, My Lad (MR James also happens to be one of my all-time favorite horror writers, who has the ability to chill my soul through his descriptive, fluid prose), "The Willows", "Dracula's Guest" (which interestingly had been cut out of the original manuscript of "Dracula" because of the length of the novel and only published in 1914, two years after Bram Stoker's death), and "The Lottery" (one of those pieces of writing that starts off on a languid note, and builds up tension slowly but surely towards a horrifying and chilling climax). For those whose appetite for the genre has increased after reading these tales of the macabre, I'd suggest exploring the following: Count Magnus and Other Ghost Stories (The Complete Ghost Stories of M. R. James, Vol. 1) The Haunted Doll's House and Other Ghost Stories (The Complete Ghost Stories of M.R. James, Vol. 2) The Essential Joseph Sheridan Le Fanu Collection (55 works) Best Ghost Stories of Algernon Blackwood The Lottery and Other Stories

A Super and Scary Selection

Published by Thriftbooks.com User , 14 years ago
Note: I made some Mormon reader angry over my negative reviews of books written by Mormons out to prove the Book of Mormon, and they have been slamming my reviews as soon as they are posted. Oh, well. Your "helpful" votes are appreciated. Thanks. This book is worth it for one story alone--the "Willows," by Algernon Blackwood. Just imagine camping on a willowy island in the Danube River. I hope the following first lines will make you feel that my little review was worth reading. "After leaving Vienna, and long before you come to Budapest, the Danube enters a region of singular loneliness and desolation, where its waters spread away on all sides regardless of a main channel, and the country becomes a swamp for miles upon miles, covered by a vast sea of low willow bushes." A great collection of other stories, too. When an author has a name like "Algernon Blackwood," you know the story has to be good. I enjoyed most of the stories because like the "Willows," they set up a mood of mystery. A great collection for a rainy day read.

The ultimate unhinged collection, the force before which the soul of man blackens and withers

Published by Thriftbooks.com User , 15 years ago
You won't find a better line-up in any other book of short tales. Here are the Masters, the true "Old Ones", who paved the horror-ridden walkways that deranged souls love to walk upon. If someone says, "I don't like horror", or rejects the newer splatter horror, this book is the perfect gift to introduce them to what horror is really about. It's not about blood; it's about dread. That sinking feeling in the pit of your stomach, that feeling that forces your from your chair at night to turn on all the houselights and peek cautiously out into the night through curtains that flutter in unseen winds. You lock the door and you lock the windows, but the feeling will not leave. Table Of Contents: The Tell-Tale Heart by Edgar Allen Poe Green Tea by J. Sheridan Le Fanu The Yellow Wallpaper by Charlotte Perkins Gilman The Bottle Imp by Robert Louis Stevenson The Great God Pan by Arthur Machen Dracula's Guest by Bram Stoker The Monkey's Paw by W.W. Jacobs Oh, Whistle And I'll Come To You, My Lad by M.R. James The Country Of The Blind by H.G. Wells The Willows by Algernon Blackwood The Beckoning Fair One by Oliver Onions The Call Of Cthulhu by H.P. Lovecraft The Lottery by Shirley Jackson From the languid, flowing prose from 'The Willows' by Algernon Blackwood, the terror of insanity in 'The Yellow Wallpaper' by Charlotte Perkins Gilman, houses haunted by madness in 'The Beckoning Fair One' by Oliver Onions, and classic tales by Poe, Stevenson, Machen, Stoker, H.G. Wells, Lovecraft, and Jackson, this truly is the best of the best of horror. It's nice to have this classic pieces available in one book. Any horror fan of course has read and/or owns these works, but the convenience of perusing your midnight pleasures in a single collection is more than worth the price of the book. I would give it 10 stars if I could, this is a "must have" book for horror fans. Enjoy!
Copyright © 2020 Thriftbooks.com Terms of Use | Privacy Policy | Do Not Sell My Personal Information | Accessibility Statement
ThriftBooks® and the ThriftBooks® logo are registered trademarks of Thrift Books Global, LLC