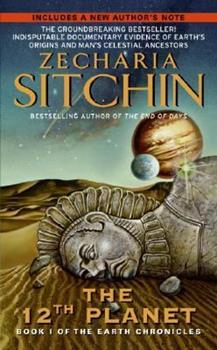 12th Planet: Book I of the Earth Chronicles

(Book #1 in the Earth Chronicles Series)

The groundbreaking, bestselling series--millions of copies sold worldwide!A classic of ancient human history--and one of the inspirations behind the History Channel's Ancient Aliens--Zecharia Sitchin's Earth Chronicles series is the revelatory and deeply provocative masterwork that forever altered humankind's view of our history and our destiny.Over the years, startling evidence has been uncovered, challenging established notions of the origins of...

Insight into our misunderstood past

Published by ihynz , 26 days ago
Sitchin really gets at some hidden truths regarding ancient Mesopotamia and the "gods" that were visiting us. His knowledge of cuneiform and engineering bring a unique combination of skills to interpretation of ancient texts and images. But I bought an "acceptable" copy which is literally falling apart as I turn pages, so make sure you buy a copy in good condition.

Published by Thriftbooks.com User , 21 years ago
This is the first book in Sitchin's monumental Earth Chronicles series. It is important to remember that fact because there is necessarily a lot of introductory material to be presented here in order to lay the foundation for what is to come. In other words, most of the really interesting stuff comes later in the series--Ancient Egypt, MesoAmerica, etc. Parts of this first book are somewhat dry and hard to get through. As one gets into the latter half, though, some pretty amazing arguments are made. If you read this book and no other, you may well have a hard time even sanctioning the kinds of ideas Sitchen presents, let alone believing them. When you read the rest of the series, though, the arguments are threshed out much more thoroughly and should at least lend an idea of possiblity to objective readers. The idea that "ancient astronauts" (a term I dislike) had a hand in Man's creation and evolution is not new. Sitchin goes far beyond the normal arguments, however. He argues that there is an undiscovered planet in our own solar system upon which life developed and evolved millions of years before life on earth, a planet that seeded earth with its earliest life forms millions of years ago when this undiscovered planet entered our solar system and essentially crashed into a large planet between Mars and Jupiter--the planet in question was broken up into two parts, one eventually forming Earth and the other the asteroid belt. The 12th planet (counting the sun and moon as planets) he calls Nibiru; it is a planet with an eccentric orbit carrying it well past the other nine planets thousands of years at a time. Here life developed and advanced at a very early period. Needing resources, particularly gold, the planet sent forth emissaries to earth. In order to free themselves of the hard labor of mining, these aliens, the Nefilim, created Man by combining their genes with those of the ape men then on earth, a procedure made possible by the fact that the two races were in fact genetic cousins. Thus, the Nefilim became early man's gods, and their stories were told in the artifacts of the ancient Sumerians and of the kingdoms that came after them. Sitchin makes a determined effort to tie Christianity and the Bible to the tale he unfolds. He effectively, and with good evidence, shows that the early stories in the Bible are based largely on older manuscripts from Sumeria. He explains many of the mysterious passages in the Bible by tying the stories to more complete Sumerian tales--the Elohim, the plural Deity mentioned in the Creation story, the great flood, the Tower of Babel, and others. In this endeavor, he is very successful. While one may not be convinced of his story of life on Earth, one cannot doubt the fact that the early books of the Bible are basically a condensed version of former manuscripts. He makes a convincing argument for his theories, but one will not be and should not be convinced based on this one book. Much supporti

A hammer for the beginning

Published by Thriftbooks.com User , 22 years ago
This is the first book of "The Earth chronicles" series in which Zecharia Sitchin tears the man's origins apart and puts them in a whole new perspective. Author is one of the top scholars in field of the ancient languages and offers his vision of extraterrestrial origins of Homo sapiens on Earth. His main point is that all ancient documents are written on the base of observations and facts and should not be taken symbolically. As we presume today, civilization has originated in Mesopotamia, but no one can really explain the fact that right from its start it was highly developed, that it blossomed virtually out of nothing and created incredible works, which we are not capable of performing even to date. Sitchin quotes many ancient documents, mostly Bible and Epic of Gilgamesh (which he read in Akkadian and Babylonian) and offers more sensful translation of these scripts. He also explains discrepancies of single/plural God in the Genesis and shows how the extraterrestrial wisdom has spread over other countries (Egypt, Greece, India...). Gods came from planet Nibiru (or Marduk in Babylonian), which has been created for special task: to bring order in our, at the time overcrowded solar system. After crushing Tiamat and forming Earth and Moon, planet Nibiru went on his comet-like journey, returning to the Sun in every 3,600 years. Life has formed and developed on it and some 450,000 years ago they noticed that our planet has some resources they desired. So they established settlements on Earth in range of Mesopotamia, because it is very rich with fuels, needed for space travelling. Man was created with genetic manipulation after their image (they mixed hominid's genes with their own in order to obtain higher IQ level) to do the mining work for them. In sitchin's light some very confusing and presumably highly imaginative texts suddenly seem very realistic. He explains why such monumental works like ziggurats, pyramids and other vast temples have been made and for what purposes they were used. The most monumental event in Earth's "modern" history was the Deluge, the Great Flood, found written and known everywhere around the world. Sitchin explains how Gods knew that it's going to happen and why Noah (or Ziusudra or Utnapishtim) was chosen to survive. After the waters flew away (the Deluge was coincided with the end of the Ice Age and the gravital pull of the passing Nibiru, therefore it lasted for a year), Gods gave many different technologies to people and they spread all over the Earth again. The book is very well written - if you don't accept the theory inside, it's still interesting piece of science fiction for you. I think Sitchin knows what he writes and the evidence written inside is sure enough for me. I already look forward what volume 2 will bring. And - if you disagree, maybe you know better?
Trustpilot
Copyright © 2022 Thriftbooks.com Terms of Use | Privacy Policy | Do Not Sell My Personal Information | Cookie Preferences | Accessibility Statement
ThriftBooks® and the ThriftBooks® logo are registered trademarks of Thrift Books Global, LLC