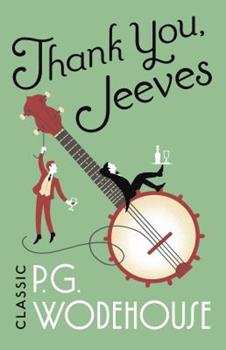 (Book #5 in the Jeeves Series)

Bertram Wooster's interminable banjolele playing has driven Jeeves, his otherwise steadfast gentleman's gentleman, to give notice. The foppish aristocrat cannot survive for long without his... This description may be from another edition of this product.

Published by Thriftbooks.com User , 13 years ago
The perfect paperback, the perfect size, and, oh yes-- the perfect novel. Published in 1934, this was the first full length Jeeves novel. But it doesn't seem like it, because at least three story collections had already appeared. Not only that, but many stories began life as serials in the Saturday Evening Post before seeing print in books in both the US and UK. If anything tarnishes the reader's uniform enjoyment, it is encountering the "n" word, as numerous reviewers have pointed out. Let me also shove my oar into the already troubled waters, simply by noting that Bertie Wooster always uses what is seen in the retro Edwardian era of the stories as the most up to date popular slang, while Jeeves consistently prefers the more proper term. Wodehouse, to this end, read ravenously, devouring American newspapers and soaking in soap operas, to imbibe the ouvre of popular culture. The two most evident results being the various gangsters and toughs that break into the stories, and a preponderance of jazz age, 20s-era slang. Racism was rife in America, but there was also the Harlem renaissance and jazz flowing everywhere from small clubs to big band dance halls. Al Jolson, who performed in blackface, was hailed as the greatest entertainer of his era. If the idea appalls us today, and if the schtick falls flat, the blame falls not to Wodehouse, that most genial of authors, but to the entertainers of the day. Regardless, it comes as a speed bump on the smooth road of Wodehouse's wonderland in this novel, and the producers of the British TV series, Jeeves and Wooster, when they came to film the novel, changed it from a minstrel band to a concert performed in blackface by Bertie's pals from the Drones Club. This, in my view, makes it worse, but it also makes it more ridiculous, and therefore in character for the drones. This writer wouldn't want readers to miss this delightful novel due to misunderstanding engendered over this point (a sentiment shared by many other reviewers). Suffice to say, the rest of the novel is smooth sailing. Thank you Wodehouse.

Published by Thriftbooks.com User , 13 years ago
3.5 Stars Wooster's obsession with playing his banjo causes his neighbors (and Sir Glossop - one of his neighbor's doctor) to complain. He is asked to either leave the house or stop playing; he chooses to retreat to the country and the idea of being in close quarters with Bertie and his banjo causes Jeeves to resign. Bertie rents a country cottage from his friend Chuffy and Jeeves ends up working with Chuffy. As it is with Bertie, he always manages to meet one of his old ex-fiances and such is the case when he goes to lunch at Chuffy's and finds one Pauline Stoker and her old man along with Sir Glossop. The book starts kind of slow (for a Jeeves & Wooster book that is) but don't despair, quite a bit happens along thel lines of man-napping, burnt cottages, loony butler with a carving knife on the loose, lover's quarrel and of course, Jeeves manages to find a solution to everything. I enjoyed it once the story picked up, but there are other J & W books that are more enjoyable.

Published by Thriftbooks.com User , 14 years ago
This is one of the funniest of the uniformly funny Jeeves and Wooster books. The scene with Chuffy, Pauline, and Bertie in the bedroom is worth the entire price of the book. Some reviewers have objected to the use of the word "nigger" in the book. This is a British book written in 1936. The word had absolutely no negative connotations in that context at the time (the Gilbert and Sullivan operettas, models of decorum, use the word more than once), and to complain of it is sheer ignorance. Here, as always, if you don't know what you're talking about, it's better not to talk. Wodehouse fans -- if you haven't read it, read it now.

Published by Thriftbooks.com User , 19 years ago
Bertie is in an awful pickle when Jeeves, over Bertie's constant playing of the banjolele, leaves his employment and is replaced by a knife weilding socialist who would rather see his blood running down the gutters than bring him his cup of tea. In this absolutely hilarious book from the Master, Bertie find himself in a burning house, chased by a knife weilding valet who thinks he is the devil, hounded by cops in the middle of the night, visited by ex-fiances in his bedroom, having his face painted black to escape from the yatch of an American millionaire, a kindered soul in 'England's biggest alienist' and in jail (again). Whew, what an adventure.This is also P.G.Wodehouse's first full length novel, and on reading it one chafes that he did not start writing full length Jeeves novels earlier. This book is a very enjoyable read, if you like P.G.Wodehouse, you will definitely take to this one, if you don't, then obviously you have not read the man's works, and this is a great place to start.

Published by Thriftbooks.com User , 22 years ago
This is a must read for anybody interested in Wodehouse's work. Set in Chuffnell Regis as a result of Bertie's suddenly found passion for Banjolele, the plot thickens with hiliarious twists. I read this book 4 times just for the character of Sir Roderick. What a book!
Trustpilot
Copyright © 2022 Thriftbooks.com Terms of Use | Privacy Policy | Do Not Sell My Personal Information | Cookie Preferences | Accessibility Statement
ThriftBooks® and the ThriftBooks® logo are registered trademarks of Thrift Books Global, LLC