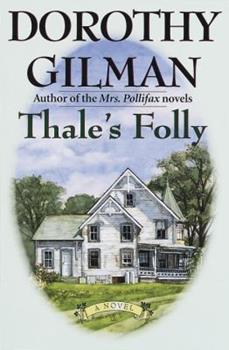 As myriad readers will gladly attest, there is nothing more entertaining than a Dorothy Gilman novel, for the author of the beloved Mrs. Pollifax novels brings to her work a distinctive mix of romance and mystery that inspired the New York Times Book Review to say of a recent Gilman jewel, "Should delight you whether you're looking for smiles or thrills." That promise is honored--with dividends--in Thale's Folly. At the request of his father, New...

Published by Thriftbooks.com User , 20 years ago
"Thale's Folly" is a delightful read. I am reminded of some of Angela Thirkell's slightly zany and lovable people, even though the situation and plot are uniquely Ms. Gilman's own. I can relate quite easily to the people involved. The only problem with this book is that I could not put it down. I also hope she continues to write more Mrs. Polifax stories as well as those outside of the series. In fact, I would like to know more about the Clairvoyant Countess and the other people whose stories she told.

From start to finish, 4 hours, tops!

Published by Thriftbooks.com User , 21 years ago
There comes a time in the avid reader's life when one day you just cannot get a satisfied start on a book. I happened to see this book on a lonely shelf and I did not fail to take a chance. I began reading and was trapped after the first few pages...from beginning to end I kept reading. Each and every character has a spellbinding uniqueness. Andrew found what he needed by going to view a piece of property and a house that his father thought was left to him by his late sister Harriet. The house, unbeknownst to his, was inhabited by a distinguished group of people. Andrew fell hopelessly for each one of them. Having arrived a stagnent writer, he ends up with so much more. This is one book that should not be passed up.

Wonderful! Even better than Mrs. P., if that's possible!

Published by Thriftbooks.com User , 22 years ago
This book is magical. I love the characters. The story is engaging. Read it and remember Aunt Dimity.

Published by Thriftbooks.com User , 22 years ago
I've grown to value Ms. Gilman as my other favorite author next to Peters/Pargeter. I grew to love Mrs. Pollifax in the Reader's Digest Condensed versions and then found all the other books written besides Pollifax mysteries. The characters are quirky, the settings are well described and I care what and how things happen/happened at Thale's Folly. My most valued momment came when Andrew's father arrived at Thale's Folly for the final time. Ms. Gilman, Thank you for straying from Mrs Pollifax.

Published by Thriftbooks.com User , 22 years ago
Spend a little while with a group of loveable, slightly eccentric characters, who beat the odds and manage to come out on top. You will probably end up wishing you could join them at Aunt Thale's. If you are looking for a feel-good book, this one certainly qualifies.
Copyright © 2020 Thriftbooks.com Terms of Use | Privacy Policy | Do Not Sell My Personal Information | Accessibility Statement
ThriftBooks® and the ThriftBooks® logo are registered trademarks of Thrift Books Global, LLC