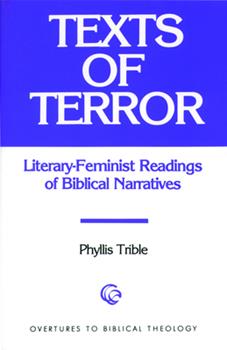 (Book #13 in the Overtures to Biblical Theology Series)

Professor Trible focuses on four variations upon the theme of terror in the Bible. By combining the discipline of literary criticism with the hermeneutics of feminism, she reinterprets the tragic stories of four women in ancient Israel: Hagar, Tamar, an unnamed concubine, and the daughter of Jephthah. In highlighting the silence, absence, and opposition of God, as well as human cruelty, Trible shows how these neglected stories interpreted in memoriam...

Published by Thriftbooks.com User , 13 years ago
Two words, disturbing and brilliant, describe this book along with excellent exegesis applied through a feminist lens to the stories of four neglected women of the Bible. This should be required reading for every person in a position of church leadership and the lay person as well who deserves to be informed. These stories are extremely tragic, but I found the Unnamed Woman (concubine) and the Daughter of Jephthah particularly upsetting. If you truly are devoted to the Bible and love the Good Book, you owe it to yourself to accept and deal with the violence and tragedy of it as well. Own it! Trible does this with her unique and profound insight that will not let you get away without rethinking these characters (because at times even the narrator (himself?) is in cahoots with the perpetrator/abuser). I like very much Trible's consistent methodology. What I regret is why she didn't write more books! She has a skill and a voice that needs to be heard as she explores. I must say also however that I agree with the quote in a prior review here that, "Trible does not communicate a sense of larger biblical patterns." I want to read more Trible! If in addition to four women she applied this to broader, Biblical patterns, yes this would be good!

Published by Thriftbooks.com User , 16 years ago
"Feminists have called upon bible readers to focus on the women in various texts, to read their stories through feminine eyes, so that we agonize over the rape of Tamar or the dismemberment of the unnamed woman of Judges 19." Feminist approach: In his review of Contemporary hermeneutics, John Newport classifies feminist Biblical scholars, in three groups. One seeks to just explore the biblical books, narratives, themes and characters relevant to modern woman situation. Another require a reading of the whole text from a female perspective, evaluating the gender impact. A third group is motivated by demolishing the 'patriarchy myth', exposing scriptures innate prejudice against women, but the social approach is the uniting theme of all three. Biblical Terror Narratives: In an upper-level seminar on Women's Studies, intended to develop deeper thinking with regard to the various roles of women in the Hebrew bible text and what can be learned from them. The in-depth study included some of the tragic stories and writings about women in the Old Testament within a variety of different literary genres and from a variety of different viewpoints, in the context of other ancient Near Eastern texts. Critical analysis, with an informed awareness of the sociological gender-biases that have molded both the text and its traditional interpretations are examined. Readings included: - Reading the Women of the Bible, Tikva Frymer-Kensky, (2003) - Women in the Hebrew Bible: A Reader, Alice Bach (Ed), (1998) - Discovering Eve, Carol Meyers, (1991) & Texts of Terror, Phyllis Trible, (1984) Texts of Terror: Focusing on four Hebrew bible violent tragedies, Trible seeks to reinterpret, in memoriam, the sad stories of those four ancient women: Hagar, Tamar, unnamed concubine, and Jephthah's daughter whose tragedy haunted me as a teenager. Trible, while inviting the reader to recognize the tragedies of those women, ignored and/or neglected in a male-dominated interpretation. Using rhetorical criticism, probing the language of the text, examining the narrative flow of textual ideas, and expecting a reader response to her analysis. Response to Sad Stories: James Williams of Syracuse University, who praises the book as a series of exegetical essays, relates her texts to other biblical narratives, but neglects to show how the stories fit into the greater drama of the Hebrew Scriptures. He has come to the final conclusion that: "Trible does not communicate a sense of larger biblical patterns."

Published by Thriftbooks.com User , 17 years ago
Phillis Trible, a professor at Union Theological Seminary in New York City, is a noted authority on feminist interpretation and literary analysis of biblical stories of the Hebrew Scriptures/Old Testament. From the start of her career, Trible has addressed the topic of how gender and gender/sex relationships are represented in the bible. She looks for biblical themes that have a 'depatriarchalizing principle', which she admits is a relatively minor theme in the biblical texts. However, this particular book, 'Texts of Terror', addresses the situation from a different view - these are stories in which women suffer tremendously under the weight of different kinds of patriarchal and male-dominated societal mores. Trible employs feminist critique and literary analysis to four particular stories - that of Hagar, Sarah's maid and mother of Ishmael; David's daughter Tamar; the daughter of Jephthah, sacrificed for her father's promise; and an unnamed concubine from Judges 19, who was brutalised in an astonishingly violent episode in the bible. These stories are offered up in way of a memoriam - the text has graphic openings with tombstones to each of the women, including an epitaph for each. Trible offers her own translations of the Hebrew texts, translating as literally as possible in most instances. She goes into great detail, drawing out the contradictions and paradoxes in the stories, and makes every aspect important. These are sad stories, as Trible says, and they deserve honesty as they come to us. Trible highlights in her introduction various pitfalls - placing the stories in a disconnected past, recasting the Hebrew stories in a solely New Testament context, and to find an inappropriately happy or redemptive ending in these without allowing the honest conclusion, that sad stories have sad endings. Her idea is rather to let the texts speak and be difficult to wrestle with, in the same manner as Jacob wrestled with the mysterious figure near the Jabbok river. We should not let the stories go until they bless us, but be aware that they may not bless us in the manner we expect. This is an excellent book for students and scholars. There are multiple indexes (subject, scripture, Hebrew word, author/editor), extensive footnoting, and well-supported scholarship. These chapters come from the Beecher Lectures at Yale. As scholar Walter Brueggemann states in the foreword, Trible's work with the method of rhetorical criticism, operating on the presumption that every word is intentional and nothing is left to chance, is equally true of Trible's own words. Trible's purpose, beyond the scholarship, is to offer honest and sympathetic readings of these texts of terror in the hopes that we as modern readers will recognise the kinds of conditions and issues still operative in the world, and work to end such terrors.

Published by Thriftbooks.com User , 21 years ago
While this book was originally published several years ago, the stories it presents may be new to many, even to practicing Jews and Christians. When was the last time you heard a sermon on the rape of Tamar? Trible's readings of these stories may also be new to many readers. I was so engaged by her work on these difficult texts that I literally could not stop reading until I had finished the whole book. I especially found interesting her insightful word studies. But the most significant aspect of Trible's book is her "reclaiming" of these stories so that they can be used to motivate us to work actively for justice so that others are not victims of such terror.

Published by Thriftbooks.com User , 21 years ago
This is one of the most eye opening books I have read! Tribble writes clearly and candidly. Her stories of what happens to some of the women in the Bible are frightening. She is good at reading between the lines. Her chapter on the Levite's concubine in Judges is truly frightening. Her book definately makes the point that the Old Testament writings by and large were not kind to women. This is putting it mildly!
Trustpilot
Copyright © 2022 Thriftbooks.com Terms of Use | Privacy Policy | Do Not Sell My Personal Information | Accessibility Statement
ThriftBooks® and the ThriftBooks® logo are registered trademarks of Thrift Books Global, LLC