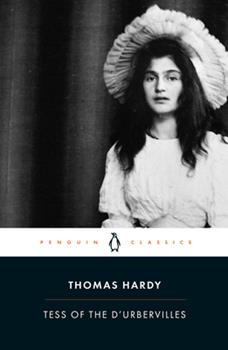 Tess of the D'Urbervilles

by Thomas Hardy and Alan Richardson

A heartaching portrayal of a woman faced by an impossible choice in the pursuit of happiness, Thomas Hardy's Tess of the D'Urbervilles is edited with notes by Tim Dolin and an introduction by Margaret R. Higonnet in Penguin Classics.When Tess Durbeyfield is driven by family poverty to claim kinship with the wealthy D'Urbervilles and seek a portion of their family fortune, meeting her 'cousin' Alec proves to be her downfall. A very different man, Angel...

Published by Donetha , 1 month ago
First time reading Thomas Hardy. I really enjoyed it!!! Already made a list of future books by this author.

Published by Thriftbooks.com User , 11 years ago
Beautiful book. I love the fabric cover. There is also a ribbon book marker in each of these books in a coordinating color!

Haven't read yet, but love the cover!

Published by Thriftbooks.com User , 11 years ago
This may be entirely shallow, but I bought 8 of these books just because I was obsessed with the cover design.....they look so great on the shelf, and I am sure they are good reads too! I have only read one of the books (Wuthering Heights) and I liked it. I was planning on giving these as gifts, but now I am going to keep them! My only qualm...the pages are bright white, and I wish they had gone with a more "vintage-y" look on the inside to match the outside. But I guess they will get that with age ;)

Published by Thriftbooks.com User , 14 years ago
When I saw the depressing amount of 1-, 2-, and 3-star reviews for this novel, I had to wonder what had gotten into the general populace. Then I read the actual reviews, and realized something. They are reading this for pleasure, yes - but why in the world to people turn to a classic novel for a fast-paced, action-packed story? (Yes, I quote.) Tess's is a dark tale, a depressing tale, a tale with no perky moments to speak of (seeing as how we all know it'll get that much worse should anything good happen). The language is poetic and ethereal, with descriptions of incredible beauty that I would give anything to have written and an overtone of intense tragedy and ill-fated cruelty. The characters are all conflicted and in turmoil, oppressed by the moral standards of the day, and Tess is likeable, as opposed to Emily Bronte's Catherine Earnshaw, say. I would like to mention that I chose this book to write a ten-page analytical paper on, know it cover-to-cover, and know that it is SO much more meaningfull when one stops to take in the paragraphs that scream, "Pay attention to ME!!!" I would also mention that I am not a college professor. I read this as a high-school freshman, which goes to show that this isn't just a book for the elite. And in relation to all the readers who feel that Hardy is a bad author? I always believe that people who act as though they can write a classic far better than the author really ought to try their hand at writing a story that will survive the ages as well as Tess. Hardy writes in lyrical prose, in similar style to his poetry, and though I completely understand wanting to read "mind candy", I don't understand expecting books accepted as real literature to do the trick. Maybe try a trashy novel first, and read Tess to cleanse the palate. This is, ultimately, my favorite novel of all time. Naturally, I have many more to read, but of all those I have tried, I have never read another that so seamlessly combined luminous tragedy, heartwrending romance, and cruel fate in a novel as beautiful as it is painful.

certainly one of the greatest novels ever written

Published by Thriftbooks.com User , 18 years ago
I was looking for another edition of TESS and couldn't believe my eyes when I saw the "average customer rating" was only three stars. So I'm taking a moment to correct the balance.TESS OF THE D'URBERVILLES must be as close to a perfect novel as anyone has written in English. It is a genuine tragedy with a girl/woman as tragic hero. It is about life on earth in a way that transcends mere sociology. It has the grandeur of Milton but concerns itself with the lives of mortal beings on earth, as much with sex as with dirt, blood, milk, dung, animal and vegetative energies. It concerns itself with only essential things the way the Bible does. It is almost a dark rendering of the Beatitudes.The story is built with such care and such genius that every incident, every paragraph, reverberates throughout the whole structure. Surely Hardy had an angel on his shoulder when he conceived and composed this work. Yet it was considered so immoral in its time that he had to bowdlerize his own creation in order to get it published, at first. Victorian readers were not prepared for the truth of the lives of ordinary women, or for a great many truths about themselves that Hardy presents. The use of British history as a hall of mirrors and the jawdropping detail of the landscape of "Wessex" make it the Great English Novel in the way we sometimes refer to MOBY DICK as the Great American Novel, though the works don't otherwise bear comparison. Melville's great white whale is a far punier creation.Hardy's style is like no one else's. It is not snappy, as Dickens can be. It is not fluid and elegant, like George Eliot's. It can feel labored and awkward and more archaic than either. It has no journalistic flavor, but is painfully pure and deliberate and dense, echoing Homer or the language of the Old Testament rather than anything we think of as "modern." Don't start with TESS but with FAR FROM THE MADDING CROWD, another very beautiful book, where Hardy is at his loosest and wittiest. Once you have the key to his style, then pick up a good edition of TESS with notes, e.g. Penguin, so you get the full richness of all the literary allusions. Hardy's lowly shepherds and farmhands move and breathe in a very ancient literary atmosphere. The effect is not pretentious but timeless. There is wisdom, poetry and majesty here. Tess stumbling through the dark and taking her last rest at Stonehenge will send chills up your spine like no other reading experience. I wonder if anyone can know why there are novels, why we care about them, or what they are capable of, without reading this one.

Published by Thriftbooks.com User , 21 years ago
I was supposed to read this book 25 or so years ago in high school. It was heavy going, and pretty meaningless to me at the time. It has come to be one of my favourite books, and I have read it more than once. The thing about hardy is that the sense of place, and time is so evocative. I have lived as an adult in Dorset - hardy Country, and recognise many of the locales he writes so beautifully about. More astounding is that some of the social mores and economic system ( indentured labour, tied villages) still exist. Like Dickens, coincidence plays a heavy hand in Hardy's plot development, a contrivance that is a little agitating to the modern, more cynical reader. Still, I find it entiely appropriate to an era when people were most often trapped in a life dictated by circumstance, when free will didn't play nearly as large a part as it does now, in a Britain where there was no place for a meritocracy, class and social station being everything. Some vestiges of that are still very evident in English life (Royalty representing the apex of the class system). Tess is a classic, well worth the effort on a number of levels - the rhythm of language, and what it says about its time and place.
Copyright © 2020 Thriftbooks.com Terms of Use | Privacy Policy | Do Not Sell My Personal Information | Accessibility Statement
ThriftBooks® and the ThriftBooks® logo are registered trademarks of Thrift Books Global, LLC