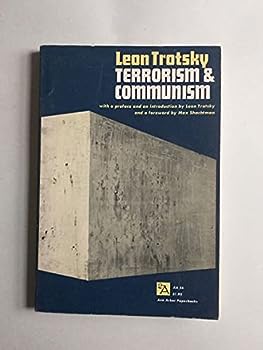 Trotsky and Slavoj Žižek defend revolutionary violenceWritten in the white heat of revolutionary Russia's Civil War, Trotsky's Terrorism and Communism is one of the most potent defenses of... This description may be from another edition of this product.

Published by Thriftbooks.com User , 14 years ago
this was Trotsky's bout with one-time Marxist Karl Kautsky, representative of Social-Democracy,revolution,the affinity for parliamentarian incremental change through bourgeois means; ballot-boxes, sitting sovereigns, capital comforted with safety nets, and the context here is Soviet Russia was waiting(isolated) for assistance from the German Revolution to happen which just eroded away with the murder of Rosa Luxemberg, curious that the word "terror" has magnetized itself around it new multi-dimensional meanings,the media has done wonderful work bundling the word "terror" with anything resembling opposition, I doubt if Israeli apparatchiks could speak on TV without utilizing the word a few dozen times, to define, fears fears-of-fears, Unknown-Knowns-Fears,Known-Knowns, the Rumsfeldian epistemology,still there is some marvelous reflections here from Trotsky on the Paris Commune,the balance of power in the shape of the globe circa 1920; the paradigms of power and the next thread in its evolution, Kautsky simply wanted to preserve, the Known-Knowns,without seeking to face those monstrous Un-Knowns, he didn't have a sensibility for such dangers, Trotsky did up to a point,but was blind of his own fate, yet here there is good analysis of the reality of aftermath Soviet situations prior to the Stalin Thermidor was to take root,a vastly involutarily trained endoctrinated marxologist himself I suspect Zizek is looking for cognitive "threads"in shapes resembling Badiou-ian " Truth" nodes, "Events" which can illumine a path perhaps simply to more discussions on youtube within the world un-evolving postpoltical context, with bio-politics, and the neo-liberal order at the helms stirring the ship with their own cognitive maps. Zizek is good at what he does, and leaves out the residue of rhetorical hatreds you still odiously find on the Left,fighting self-defeating battles merely to hear one's own voice, I like to recall the old RCA white putchee dog, staring mindlessly into vinyl playing speaker cone; "What's this?" like the Left does today for things they refuse to explain, Zizek has a Wotan-like spirit in these Verso writings assignments assembling his theoretical "Walkure" to assist him;
Trustpilot
Copyright © 2022 Thriftbooks.com Terms of Use | Privacy Policy | Do Not Sell My Personal Information | Cookie Preferences | Accessibility Statement
ThriftBooks® and the ThriftBooks® logo are registered trademarks of Thrift Books Global, LLC