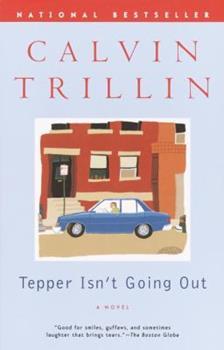 Murray Tepper would say that he is an ordinary New Yorker who is simply trying to read the newspaper in peace. But he reads while sitting behind the wheel of his parked car, and his car always seems to be in a particularly desirable parking spot. Not surprisingly, he is regularly interrupted by drivers who want to know if he is going out. Tepper isn't going out. Why not? His explanations tend to be rather literal--the indisputable fact, for instance,...

Published by Thriftbooks.com User , 16 years ago
My family complained as I read this book, because I couldn't help but laugh outloud. It was so funny and so full of those poignant little truisms about human nature. The basic story: Tepper likes to sit in his car and read the paper with time on the meter in New York City. Of course, people want him to move it so they can have the space. Does he just like to read? Or does he recall the days of his youth when his skill at finding a good parking place was a great pleasure for him (before he caved and bought a place in a parking garage)? Folks begin to line up to sit in his car for a few minutes with him and get his advice on problems. All of this infuriates a fascist mayor. This is a very nice book (readers will catch the reference to whitefish!).

Published by Thriftbooks.com User , 18 years ago
If books are like food, some novels are three-course meals, meaty and filling. Others are the diet plate, good for you but not very tasty. Tepper Isn't Going Out is cotton candy: sweet, light, quickly consumed...an enjoyable mid-afternoon snack.Calvin Trillin's novel follows New Yorker Murray Tepper, a mild-mannered man with a mild-mannered job and a mild-mannered family. In short, he's a pleasant but unspectacular man who has started parking his car throughout the city and just enjoying his spot, sitting and reading the paper. Initially irritating other drivers who want his spot, Tepper eventually develops a following as people visit him in his car and relate their problems to him. Tepper's advice is minimal, but seems to always work.Opposing him is the mayor, an extreme parody of Rudy Guliani who is obsessed with the forces of chaos and finds Tepper to be a vicious social agitator. Thus, without really doing anything, Tepper becomes a minor hero and is getting lots of notice from both press and politicians.This is a wonderful little story, both funny and well-written. Trillin shows that his gift for humor is as strong as ever. Like cotton candy, you won't really get a lot of great "nutrition" here, but you will have a good time. And unlike cotton candy, there is no risk of cavities here.

Published by Thriftbooks.com User , 19 years ago
Like its title character, the novel "Tepper isn't going out" is quirky, refreshing, and worth acquainting yourself with. It chronicles Murray Tepper's penchant for parking in a lighthearted but dry-wit manner, enhanced by vibrant writing and scenes that could only happen in New York.One of the many surprises is that the novel's protagonist is a 67-year-old man. He's puzzling in the way that our fathers and grandfathers are puzzling -- why *do* some of our loved ones do the things they do, with such odd behaviors and strange habits? Calvin Trillin doesn't provide answers to those questions, but he does allay our fears, implying that we needn't worry so much. In doing so, the novel offers some charming insights into the private life of the fictitious-yet-realistic Murray Tepper. Although we readers get to know him, we don't *really* get to know him; that is, his quirks and ticks remain beyond our full comprehension. Rather than toying around with omniscience, the author wisely takes a 3rd-person perspective, which leaves questions unanswered in a good way. (I happen to prefer books whose endings aren't *too* tidy.)All in all, then, this is an entertaining but realistic read, full of individuality and refreshing little quirks. I highly recommend it!

As delicious as a "nice" whitefish

Published by Thriftbooks.com User , 19 years ago
A humorously acerbic novel that is as delicious as a "nice" whitefish. The critics have made a big tsimmis about this book -- rightly so. If you have your car in a space that is GFT, good for tomorrow, this book is worth leaving the space to purchase and read. Murray Tepper loves to park his car in Manhattan. He knows all the parking rules; he enjoys sitting in his parked car and signaling to other drivers that is not 'going out' of the space. Tepper's behavior sometimes irritates the people who covet his spot. Murray has perfected a flick of his hand, not too aggressive, to tell people he isn't moving. It is the same finger wag used by the city's vindictive mayor in a barricaded City Hall to admonish his critics. Tepper irritates the mayor, Frank Ducavelli (read as RUDY), known in tabloid headlines as Il Duce-who sees Murray Tepper as a harbinger of what His Honor always calls "the forces of disorder." Rudy, I mean Ducavelli has enforced an arcane rule that people cannot hail a taxi from the street, but must hail it from the sidewalk. He has also attempted to enforce a dress code for city parks. TRILLIN captures NYC so well, that it is hard to believe that the book is fiction. The book is filled with those observant nuggets, like food workers who wear gloves, but the gloves are dirty; or the cast of political entrepreneurs who take advantage of issues to promote their causes. After a story on Tepper in the post-modern East Village "Rag" weekly, fellow New Yorkers become aware of Tepper, a direct mail list maven. Counter men from Russ and Daughters and even Upper East-Siders come to sit and chat with Tepper in his car. This is the book that should be selected as the citywide read in 2002.

Published by Thriftbooks.com User , 19 years ago
As a critic in the New York Times Book Review so aptly noted, much of this book's appeal is lost if one does not know, cannot understand, and has never experienced the relationship that any Manhattanite has with a parking space.A New Yorker would kill for a good space. He would maim and pillage if the result might be a spot right in front of his building. He understands, and knows not to question the logic of, alternate side parking. Trillin has proven himself a New Yorker. His formidable knowledge of traffic laws and patterns is often what gives this book the grain of truth it might otherwise lack.But Mr. Trillin understands more than just the city's traffic; he understands the city. His fictional Mayor Ducavelli bears such a resemblance to former mayor Giuliani that, as his successive crackdowns upon the 'forces of disorder' become more and more draconian, you may find yourself wondering why Rudy never thought of some of his antics. Meanwhile, Trillin understands the heart of the city, and he knows how one thing leads to another; thus it seems perfectly normal that a man like Murray Tepper would compel levels of compassion not generally attributed to New Yorkers on his way to cult stardom.But most importantly, it's just a funny book. I particularly liked several conversations with Murray's friend Jack, who insists on ordering sushi medium-well ("That means no pink showing") and the unlikely recurrence and significance of the somewhat bizarre phrase 'ya jerky bastard, ya.'So buy a copy now, and enjoy the book, before the forces of disorder become too great to ignore.
Copyright © 2020 Thriftbooks.com Terms of Use | Privacy Policy | Do Not Sell My Personal Information | Accessibility Statement
ThriftBooks® and the ThriftBooks® logo are registered trademarks of Thrift Books Global, LLC