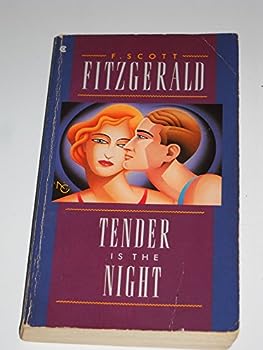 Tender Is the Night (Reissue)

F. Scott Fitzgerald wrote in a friend's copy of Tender Is the Night, "If you liked The Great Gatsby, for God's sake read this. Gatsby was a tour de force but this is a confession of faith." Set in the South of France in the decade after World War I, Tender Is the Night is the story of a brilliant and magnetic psychiatrist named Dick Diver; the bewitching, wealthy, and dangerously unstable mental patient, Nicole, who becomes his wife; and the beautiful,...

Published by Thriftbooks.com User , 16 years ago
Thought provoking and brilliantly written "Tender is the Night" etches itself into your brain: once read, never forgotten. Longer, looser but more complex and much darker in its subject matter than "The Great Gatsby", Scott Fitzgerald similarly transcends time & place to leave you with quite unforgettable images. For example, describing an open-air dinner party on the Cote d'Azur he writes: "There were fireflies riding on the dark air and a dog baying on some low and far-away ledge of the cliff. The table seemed to have risen a little toward the sky like a mechanical dancing platform, giving the people around it a sense of being alone with each other in the dark universe, nourished by its only food, warmed by its only lights." And, thirty years after first reading that wonderfully evocative description, it's still there: burned-in as a reference-point that follows me around all open-air late night parties... just waiting for that distant bark. Replete with similar passages, "Tender is the Night" juxtaposes romantic idylls with the personal tragedies surrounding most of its characters, and, in so doing, triumphs in exploring the differences between perception and reality, superficiality versus excess, strength of character versus fear & weakness, and uncontrollable madness versus self-induced self-destruction. Drawing you into a hedonistic world that you would sincerely wish to be part of and then exploding its deficiencies in front of you, it leaves you realising that not all is what it seems. Closing with a superbly structured final paragraph that ranks as one of the most effective I've ever read - bringing together everything that the book seeks to explore in a few cogently dismissive and understated sentences - this is writing at its very best: compelling, perceptive, complex, timeless and, beneath its superficially "glossy" exterior, very true. If you haven't read it do: it's one of the best books out there.

a legitimate and very human tragedy:

Published by Thriftbooks.com User , 17 years ago
I liked Tender is the Night even more than I expected to. As a fan of a few of his other works (notably The Great Gatsby, This Side of Paradise and The Collected Short Stories), I went into this book with a healthy enthusiasm. . . What I discovered was a story that was painful to watch unfold and one that kept me engaged and interested in what was happening from the first page to the end. It tells the tale of Dick Diver, his wife Nicole, and numerous other equally complicated individuals who sway in and out of their lives over the years following World War One and just prior to the rise of Adolph Hitler. Americans living in or around Paris and the resort spots of France, these are rich people, people so rich that their money has literally destroyed them. They have become those rare people who don't have to wish for anything physical, whether it comes in the dream of a mansion on a hill in some far away country, a group of friends that includes royalty and movie stars, or sexual conquests with anyone you can even momentarily desire. All their dreams have, or could possibly on a whim, come true. And so there is nothing in this life left for them . . . It is a sad tale of likable people coming unglued, of seeing their lives destroyed and watching nobody care, regardless of their goodness. It is a story of absolute and utter desolation, finally, as the almost journalistic ending comes at you. It is like falling out of touch with someone who was once the most important person in your life, hearing vague stories about what they are up to and realizing they are getting fainter and fainter and fainter . . . This was quite obviously a very personal book for its author, a disillusioned man who saw many of his own dreams come true early on and who was left to watch his own joy turn into boredom and finally complete indifference. This book is the nightmare that all of us hope never comes true. It is somewhat comforting, in the end, to realize that in spite of his own early death, his crazy wife and his alcoholism, F. Scott Fitzgerald's story isn't anywhere near as terrible as this one. It is, among a multitude, one of the better books I have ever read.

Perfumed heaven, but for the madness.

Published by Thriftbooks.com User , 19 years ago
This is my favorite Fitzgerald novel, primarily for its biographical proximity to their similarly glamourous and ghastly marriage. The story opens on the unspoiled Riviera where money and adventure ruled, the Divers were the epitome of the expatriots of the Lost Generation/Jazz Age. Not only mythically gorgeous, Mrs. Diver was an ideal as a mother and dramatic gardener. She removes to an Eden-like retreat of lush and fragrant blooms that is infamous for its mistakes, i.e. Fitzgerald's lack of familiarity mixing tulips with sunflowers and other late summer blooms. The endless parties and thrill seeking begins to cloud the horizon and the startling secret that the couple have been trying to elude, breaks into a storm. The unraveling of this pharntom perfection is indeed `Tender' and ineffably sad. Zelda and Scott scaled Olympus as well, and suffered from excess and what was explained as a streak of madness in Zelda's family like a fatal flaw. The alcohol factor, in Zelda, given the advantage of the times, seems far more likely the major factor for her suffering than some arcane mental illness. Fitzgerald and Zelda were co-dependent, last stage alcoholics with irresponsible and self-centered natures, the ingredients of tragedy and self-destruction. The ingredients often of great writers. Yet, in Tender Is the Night, it is more as if madness comes like fate to challenge such god-given beauty and glory. The hot Riviera, white walled, and perfumed heaven is no where else so perfectly envisioned. Fitzgerald's The Great Gatsby is generally considered a better work, but for pure mood to attach to the Lost Generation, this is by far and away the one that touches my heart.

Published by Thriftbooks.com User , 21 years ago
No matter what the pundits say give this book a chance, and you'll find it to be Fitzgerald's best. The Great Gatsby may be more elegantly written but Tender Is The Night packs a wallop that makes the former seem a bit too cute and melodramatic. With the revelation of Nicole Warrens's source of mental illness (which you'll find in the unabridged version), the plot moves along at a snappy pace with premonitions of a future tragedy hinted at but never revealed (which is the sign of master storyteller). The ending is incredibly sad and because of it incredibly beautiful. Unlike Nick Carraway's eulogy that acts like a balm, the 3rd person narrative of Tender Is The Night offers the reader no such solace. There's only the lingering image of a man born to be great, broken beyond repair.
Copyright © 2020 Thriftbooks.com Terms of Use | Privacy Policy | Do Not Sell My Personal Information | Accessibility Statement
ThriftBooks® and the ThriftBooks® logo are registered trademarks of Thrift Books Global, LLC