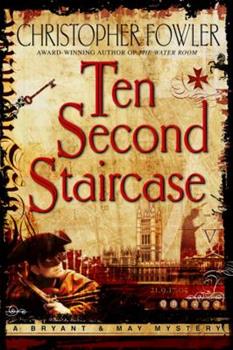 A bizarre killer nicknamed The Highwayman has turned London's blazing-hot summer into a ticking time bomb, but never fear, detectives John May and Arthur Bryant are on the case Christopher Fowler is] a new master of the classical detective story.--The Denver Post

Published by Thriftbooks.com User , 14 years ago
When in comes to the classic British locked room mystery, the stuff that we associate with Sherlock Holmes and Dr. Watson, there is no contemporary writer more adept than Christopher Fowler. And "Ten Second Staircase" is one of his best. While the aging and eccentric detective duo of John May and Arthur Bryant are no Holmes and Watson, they are certainly more unusual, at least as entertaining, and in many ways more interesting given the depth and complexities of Fowler's multiple story lines which transcend and sometimes overpower the core mystery. Cleverly conceived and elegantly written, "Ten Second Staircase" delivers a head-scratching whodunit while plumbing deep issues of morality, vigilantism, and restless youth. If this seems like a lot to swallow for a simple mystery, the talented Fowler pulls it off while maintaining his patented British tongue-in-cheek humor balanced with genuine suspense. In this installment, an obnoxious artist is found dead, floating in her own piece of outrageous "art". The only eye witness to the apparent murder is a young teenager, visiting the gallery with his private school class. But the lad's description of the killer - a man on horseback dressed in the garb of an early 18th Century highwayman - stretches credibility and leaves the May/Bryant team with scant evidence and little to go on. When other minor - and annoying - celebrities start meeting grisly demises of their own, with reports of the "highwayman" in the vicinity, it appears a serial killer is on the loose. But rather than cowering in fear, Londoners view the killer more like a rock star, a modern day Robin Hood-like figure doing the city a service by clearing out some of the human vermin. Meanwhile, the improbable crew of May and Brant's "Peculiar Crimes Unit" are again under attack, sabotaged by their oily leader, Leslie Faraday, and highly in risk of being shut down at the hands of a heavy-handed thug hired by the home office. Through a complex series of plots and subplots, Fowler shows no impatience - much like his cranking protagonists - in weaving his way to another satisfyingly bizarre conclusion. Intelligent, savvy, and insightful, Fowler's May/Bryant series in one which deserves more acclaim and a broader following. If you haven't discovered these guys yet,do yourself a literary and entertaining favor and make the acquaintance here.

Published by Thriftbooks.com User , 16 years ago
Ten-second Staircase is another of the Byant and May mysteries. It is possible to read these novels individually, but I would recommend starting at the beginning so that you can fully appreciate all the characters and understand the references that run throughout the series. If you haven't read a Christopher Fowler novel before I would recommend 'Darkest Day' or 'Full Dark House' as an introduction to Bryant and May, or 'Disturbia' if you just want a brilliant novel. In The Ten-Second Staircase a controversial artist has been drowned in her own installation (a tank filled with formaldehyde and a number of aborted foetuses!!) The only witness to the crime is a young schoolboy who was sketching in the room at the time of the murder. He says the crime was committed by a Highwayman on a horse... Following this a number of minor celebrities are also murdered and each time the witnesses claim to have seen a Highwayman. Soon London is in the grip of Highwayman- fever, with the gutter press claiming that he is a hero. Will Bryant and May be able to discover the true identity of the Highwayman and stop any further killing? This is a really typical Fowler novel. Quirky, good fun and creepy in all the right places. He also throws in a few bits of London trivia along the way (For example, I now know why Georgian railings often have pine cones adorning them) As usual, highly recommended.

The strongest entry in the series to date

Published by Thriftbooks.com User , 16 years ago
Arthur Bryant and John May are two of detective fiction's most unique anachronisms. The de facto heads of the London Police Department's Peculiar Crimes Unit (PCU), Bryant and May have been investigating murders in their somewhat peculiar way for almost 60 years. Now well ensconced within senior status, the two, as well as the somewhat unusual personalities who assist them in the ramshackle PCU offices, attempt to maintain their relevance in the modern world, occasionally eschewing modern detection methods in favor of tried-and-true tactics that have held them in good stead for decades, even as the misdeeds of the past --- more often than not --- provide clues for present-day mayhem. TEN SECOND STAIRCASE, the latest Bryant and May novel, involves a series of locked room mysteries, in which a noted personality of some dubious repute (a controversial artist, a minor celebrity, a notorious pederast) is found dead under ambiguous circumstances, possibly by ill fortune or accident, but probably by murder most foul. An unlikely figure, appearing to be an old English highwayman, is seen in the vicinity of each death; he leaves a somewhat cryptic calling card at each scene. As if this was not enough, the PCU finds itself threatened, as in the past, with extinction. The unexpected and unofficial test for the ongoing survival of PCU is the resolution of its most notorious cold case, one that involves the so-called Leicester Square Vampire, a cold-blooded murderer whose victims include May's own daughter. Those who occasionally have taken Fowler to task in the past for what they have considered to be unlikely solutions to difficult puzzles will have reason to rejoice here, as the apparently impossible Highwayman murders are plausibly explained. Bryant is a curmudgeon, but one cannot help but embrace him for his penchant for rude and unpredictable --- yet dead-on --- practical jokes. May, while being the more approachable and pragmatic of the pair, has an unrepentantly sweet side to himself, manifested by his gentle doting upon April, his agoraphobic granddaughter who in TEN SECOND STAIRCASE joins the PCU as a full-time member and brings her canny powers of observation to the fore. There is so much to like here. Fowler gently rapid-fires from the mouths of Bryant or May bits of London history at the reader, and the tone, from first word to last, is so unrestrainedly British that while reading it one can almost feel the cobblestone beneath one's feet. At the same time, there is a great deal of understated dark humor to recommend. Think, if you will, of Agatha Christie resurrected to script "The Avengers" television series, and you'll have an idea of what's going on here. Rather than being formulistic writing, this is a comfortable familiarity, given that Fowler keeps his idiosyncratic characters fresh and interesting by...well, creating fresh and interesting characters to begin with. This element, combined with Fowler's off-kilter storyline and intriguin

Published by Thriftbooks.com User , 16 years ago
Geriatric police detectives Arthur Bryant and John May know their careers are almost over. The long term partners realize it is just a matter of time before their cherished Peculiar Crimes Unit is downsized as the brass thinks the two fogies are obsolete and their cell with them. Still Bryant and May want to go out on top solving their current cases just like they have always done. Neither is easy. The notorious Leicester Square Vampire is a cold case that is personal at least to May whose daughter was killed by the culprit. The other investigation involves uncovering who the lethal caped clad Highwayman seen riding a horse is before he or she kills another detested celebrity behind a locked door. TEN SECOND STAIRCASE is a terrific police procedural that clearly honors the golden age mystery writers as well as fans of those classics. The story line is action-packed yet filled with plenty of humor as the two long time partners work the two cases while waiting for the brass to shut down their unit and retire both of them to the old police officers home. Thought crimes are odd to say the least; the police work is professional leading to strong investigations. Sub-genre fans will want to read this intelligent amusing investigative tale. Harriet Klausner

Published by Thriftbooks.com User , 16 years ago
June 25, 2006 Crime Offbeat Cops By MARILYN STASIO SOME crimes are just too bizarre to be processed through the normal channels of London's Metropolitan Police force. In the offbeat novels of Christopher Fowler, a special place is reserved for such oddities -- the Peculiar Crimes Unit, which was established during World War II to deal with cases that might cause "social panics and general public malaise." To the chagrin of the present-day police administration (and the delight of readers looking for something genuinely witty and original), this anachronistic department lingers on under the unorthodox command of Arthur Bryant and John May, misanthropic detectives long past the age of retirement and "altogether too vague, intellectual, socialist and downright arty" for the comfort of the establishment. TEN SECOND STAIRCASE (Bantam, $24) is the fourth book in the series and a lively example of Fowler's imaginative approach to what is essentially a traditional whodunit. Here's how things typically work: the detectives are challenged to solve a crime so fantastic it beggars belief. May, the methodical fact-finder, will collate the data and try to apply some pattern of logic to the incredible events. Bryant, the crotchety genius who works by instinct, will look to London's dark and bloody past for enlightenment, believing that "criminals and victims were linked to the land, to history and to their own irrepressible natures." As historians, librarians, clairvoyants, exorcists and white witches are consulted, the plot bulges with strange facts and theories. They may or may not be germane to the case, but they're madly entertaining. Fowler is in exuberant form here. His story begins with a series of elaborate executions of second-rate celebrities, carried out, according to eyewitnesses, by a masked highwayman on horseback. Seizing on the mythic stature of this figure, with its links to Robin Hood and other folk legends, Bryant speculates that the vigilante is a flesh-and-blood murderer "rehabilitated in the public mind as a hero, a people's champion." The question is, which disenfranchised group has conjured him up -- and what's the beef with celebrities? The sleuths direct their attention to a public housing project in Clerkenwell, the historic stamping ground of the Knights Templars, where a turf war is under way between a gang of teenagers and a group of students from a nearby private school. For all their wisdom, Bryant and May are nearly undone by the motiveless malignity of these youths. The two detectives are, as a colleague puts it, compelled to update their mental software. While not exactly killing, the suspense is thrilling.
Trustpilot
Copyright © 2022 Thriftbooks.com Terms of Use | Privacy Policy | Do Not Sell or Share My Personal Information | Accessibility Statement
ThriftBooks® and the ThriftBooks® logo are registered trademarks of Thrift Books Global, LLC