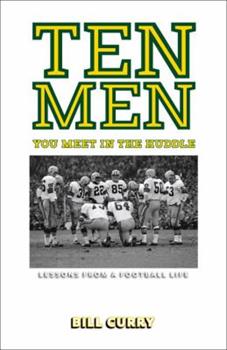 Ten Men You Meet in the Huddle: Lessons from a Football Life

No sport rivals football for building character. In the scorching heat of two-a-days and the fierce combat of the gridiron, true leaders are born. Just ask Bill Curry, whose credentials for exploring the relationship between football and leadership include two Super Bowl rings and the distinction of having snapped footballs to Bart Starr and Johnny Unitas. In Ten Men You Meet in the Huddle , Curry shares the wit, wisdom, and tough love of teammates...

Published by Thriftbooks.com User , 13 years ago
Wonderful personal stories and anecdotes involving some of America's greatest football heroes. Even if you're not into football (like me) this book is entertaining and a fast read. It's just as if you're sitting and talking to the author. Not only is the reader entertained, but one gets the true sense of the quiet strength that encompasses the life of Bill Curry.

Great Book for the Sports Fan of Any Age

Published by Thriftbooks.com User , 13 years ago
This is a story about some of football's greats from the the 60s and 70s as well as a book of life lessons learned on and off the field. Well written and attention grabbing, you will not be disappointed no matter which you are looking for.

Published by Thriftbooks.com User , 13 years ago
Nice collection of stories, some funny, some sad, but all leaving a lasting impression on Bill Curry and providing the reader with entertaining reading.

hard to put down

Published by Thriftbooks.com User , 13 years ago
Hard to put down, and not just because it's well written. If you're old enough to remember the players and coaches in this book, you probably need the wonderfully readable typeface and font seen here. Would that more publishers were as sensitive to boomer eyestrain. Thank you, ESPN Books! Along with Mark Bowden's "The Best Game Ever", Bill Curry's "Ten Men..." reminds us of an era when football players came from everyday life. Both offer terrific snapshots of Vince Lombardi and John Unitas, and of an era fondly remembered.

Published by Thriftbooks.com User , 13 years ago
This autobiography of "OLD-SCHOOL" college and NFL player and Coach Bill Curry, is a must read for every "OLD-SCHOOL" fan of football. It also provides an important link to the past for younger fans, who only know the name Vince Lombardi, because his name is emblazoned on the Super Bowl trophy. Bill's credentials include ten years in the NFL playing for multiple teams, the most impressive of them, being two world championship teams that were part of, perhaps the greatest dynasty in the history of the NFL - "LOMBARDI'S PACKER'S", and part of a third world championship team, as a member of the Baltimore Colts. He has also held multiple coaching jobs, including the head coaching position at Georgia Tech, Alabama, Kentucky, and currently is employed as the head coach of Georgia State University. What the author has done quite uniquely... and creatively... is "wrap" his life story around the "mileposts" of ten men who had a tremendous influence on his life. Eight of these men are infamous in the mythology of college and professional football: Bobby Dodd (one of only three men to be elected to the National Football Foundation Hall of Fame as a player AND a coach), Vince Lombardi (perhaps the greatest coach in the history of professional football), Bart Starr (Hall of Fame quarterback), Willie Davis (Hall of Fame defensive end), Ray Nitschke (Hall of Fame linebacker... and perhaps one of the most intimidating and feared players in NFL history), Don Shula (winningest coach in NFL history and of course in the Hall of Fame), Johnny Unitas (Hall of Fame quarterback), Bubba Smith (former massive NFL defensive end)... and two others... not in the aforementioned, rarefied air of athletic pantheon... but still an important part of the author's life and success. Bill Badgett his high school football coach, who was the first coach that pushed the pre-pubescent youngster on to the football field, despite the fact that the author's youthful dream, was of pitching for the New York Yankees. Coach Badgett dragged... shoved... and led... a young Curry to find the winner within... which could only be found... by facing oneself... at the inner wall that a young boy had never faced before. It was the first time that Curry's inner "soul", had ever been to the crossroads of physical and mental exhaustion... one road was called "quit"... the other road was called becoming a "man"... and Coach Badgett was instrumental in forging the youngster that would become a man. There is also a chapter on friend and author George Plimpton... and a final short homage to his "twelfth man" and Father. There are numerous elements that contribute to the "beauty" of this book to the eyes of a sports fan. The writing is always honest and direct, even when the author knows the truth isn't pretty... especially in the harsh light of modern days. When the author recounts his teenage years in 1950's Georgia, he doesn't shy away from the ugly racism that existed in those days. It's a minor epiphany
Trustpilot
Copyright © 2022 Thriftbooks.com Terms of Use | Privacy Policy | Do Not Sell My Personal Information | Accessibility Statement
ThriftBooks® and the ThriftBooks® logo are registered trademarks of Thrift Books Global, LLC