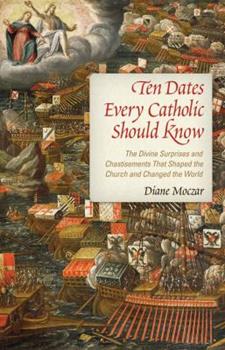 Ten Dates Every Catholic Should Know: The Divine Surprises and Chastisements That Shaped the Church and Changed the World

The divine surprises that shaped the Church and changed the world. Ten Dates Every Catholic Should Know shows that from the first days of the Christian era, at key moments when civilization hung in the balance, God has intervened sometimes subtly, sometimes dramatically but ever and always He has come forward Himself or given strength to those who were faithful to Him.

everything your Catholic school teachers should've taught you but didn't

Published by Thriftbooks.com User , 15 years ago
If you're like me and went to Catholic school in the 80s you probably learned nothing in religion class except how to make ugly felt and burlap banners. Diane Moczar has written the book for you. It's a lightning fast,exciting and beautifully written overview of the ten most important dates in Catholic history. I was thrilled reading about how God used flawed, difficult (Constantine was no choir boy) people to make history. Dr. Moczar has a marvelous sense of humor and I'd love to sit in on one of her classes. Her descpriptions of the teenaged King Clovis, his saintly bride, Rapsputin, Pope Leo and Saint Bruno were marvelous. Two women mentioned were particularly awesome: Saint Genevieve, the protectress of Paris and Countess Matilda who repeatedly fought off the Germans, and protected the pope. I was especially moved by the pitiful end of the Dauphin of France and chilled by the descrption of the mess caused at the end of the Ottomans and how we are all still living with the mistakes made by the West then. The last part of the book is on Fatima, and I was reminded that the visit from Our Lady was not a one time thing but a warning for our age as well as the people who lived in 1917. This is an excellent book. I wish I could give it ten stars.

Published by Thriftbooks.com User , 15 years ago
As a history-lover and a Catholic, I am always cautious when purchasing history books. Will it be biased, especailly against the Church? Does the author have an agenda, especially a heterodox one? If Catholic, will it include an accurate spiritual perspective? And of course, as with many unfortunate history books, is it boring? This book is wonderful! An easy read, especially for a history book, but not lacking in sufficient detail. The book would provide one with a good, basic background, and could also be used as the first step towards a more involved study of the Church's history. Just as the title implies, every Catholic should have a basic knowledge of the events in this book, and this book is a wonderful place to gain such knowledge. I would recommend it to all, including new converts. After all, to study Church history is to become Catholic. A+

Published by Thriftbooks.com User , 15 years ago
Diane Moczar has done the seemingly impossible: written a terrific, thematically complete and coherent history of the two-thousand-year-old Catholic Church in about 170 pages. She is able to accomplish this feat by her wise choice of format. Instead of relying on the usual artificial breaks in time like "Dark Ages" or "Reformation," she identifies ten events that have served as hinges upon which Catholic and civilizational history turned. She then examines these hinges -- the conversion of Constantine, the Baptism of Clovis, the crowning of Charlemagne, etc. -- for their significance, and links them in a chain all the way to Fatima and the twentieth century. The chapter on Clovis's baptism is fascinating. As Rome disintegrates in the West, a fifteen-year-old Frankish pagan assumes the throne in Gaul. For a time it seems that the king is impervious to conversion. But the patient witness of both his saintly wife (St.) Clotilda and the bishop St. Remigius wear him down, and he is baptised to great aplomb on Christmas Day in 496. Western civilization thus survives an existential crisis, and a foundation is laid for the era of Christendom ushered in by Charlemagne three centuries later. Readers should know that Ms. Moczar is a decidedly Catholic historian. She attempts to discern the hand of God -- Providence -- in the events she describes. You may disagree with some of her conclusions about the heaviness of His hand in this event or that, but she is nonetheless a first-rate scholar and, just as importantly, an excellent writer with crisp prose. "Ten Dates" would make an interesting selection for a Catholic book club, as members could explore a chapter-length event per month. Ms. Moczar's style is very accessible, and readers as young as high-school-age will have no difficulty navigating the text.

Published by Thriftbooks.com User , 16 years ago
I purchased this book randomly after browsing through the selections of a small catholic book store. Since the author was unknown to me my expectations were rather low and the book actually sat undisturbed on my nightstand for a couple of weeks. However when I finally began to read the book I found the contents so riveting I couldn't put it down. As a recent catholic convert and an individual who unjustifiably fancies himself an amateur historian, to me this book was a revelation. I had never previously read a history from a catholic perspective and this book was the perfect introduction. I'm convinced the thesis of this small book could be expanding into a phenomenal multivolume work. I found the author's chapters entitled "The Protestant Catastrophe" and "The Age of Revolution" especially fascinating. These chapters made clear concepts I was only beginning to independently form. This book found its way into my hands at just the right time and has had a profound effect on how I view history.

Published by Thriftbooks.com User , 16 years ago
I am teaching a class of Catholic high school students about the Middle Ages, leading into the decline of Christendom. The chapter I opened up to was "The Protestant Catastrophe" and it alone is worth the price of the book. It clears up the confusion about the climate that produced such a fractured Christian world (hint: it wasn't about the moral laxity of the clergy or even doubts about the Real Presence. It was much more about the weakened spiritual state of the laity and the rise of nationalism.) I could easily follow when the author "connected the dots" and frankly, "followed the money" (the rising wealth of the merchant and business man in a prospering proto-capitalistic society) to show how easily men's hearts were turned from God to wordly affairs. Great book!
Trustpilot
Copyright © 2022 Thriftbooks.com Terms of Use | Privacy Policy | Do Not Sell My Personal Information | Accessibility Statement
ThriftBooks® and the ThriftBooks® logo are registered trademarks of Thrift Books Global, LLC