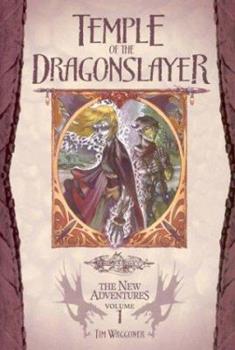 Temple of the Dragonslayer (Dragonlance: The New Adventures, Vol. 1)

(Part of the Dragonlance Universe Series and Dragonlance: The New Adventures (#1) Series)

Regaining consciousness without her memory, Nearra travels to a temple where healers may be able to help, accompanied by a ranger, warrior, elf, and wizard, all having secrets she is not aware of.

Published by Thriftbooks.com User , 13 years ago
When I stumbled upon this at the library, I didn't expect much. I pride myself in being a very fast reader, and I figured this would be an easy read for a boring, rainy afternoon. But from page one, I was hopelessly lost in the world of Kryyn, and couldn't put this awesome little book down. The story starts out with teen-aged Nearra waking up in the middle of the forest with no recollection of her past. She is pursued by Goblins and Dragons before stumbling upon the wizard Maddoc and the young ranger Davyn. Soon, she acquires a strange little group of friends, including a fallen squire, a Kender who may or may not be a wizard, and a pick pocketing Elf. Strangely, I grew quite found of this cast of characters, and found myself really rooting for them. I went and got the rest of the series the minute I finished the first one. The only problem is that the writing suffers slightly from the different writers. For example, in "The Dying Kingdom", it clearly states that Elidor's eyes are violet. Later in the series, it says his eyes are blue. Then grey. Then blue again. Over all, though, these mistakes are miniscule and don't take away from the reading experience. I highly recommend this series. I really didn't expect much from this book, but, to my pleasure, I was proven quite wrong. Five stars and two thumbs up. Reviewed by: The Home-schooled Bookworm

Published by Thriftbooks.com User , 16 years ago
This fabulous fantasy, Temple of the Dragonslayer, by Tim Waggoner, is the first book in an eight part series. The story takes place in the mystical world of Krynn, a world filled with goblins, dragons, ogres, dwarfs, elves and wizards. The story begins as a young girl, Nearra, wakes up in the forest surrounded by goblins who proceed to chase her deeper into the woods. With no memory of her past, Nearra tears blindly through the forest not knowing why they are chasing her or how she will survive. Alas, the adventure begins! Along her quest to restore her memory, Nearra is joined by four newfound companions each with their own motivations for making the journey. The friends vow to help Nearra discover her past. But at what cost? The group faces dragons, ogres and goblins on their way to an ancient temple which Nearra hopes will reveal the answers she so desperately seeks. Is all what it seems? Could friends be enemies and enemies be friends? When it comes to Temple of the Dragonslayer, this book is more than just something to be read, it is something to be experienced. You will need a good block of time to read it though, because once you start, you will not want to put it down! I enjoyed the twists, the turns and the all the action in between. I give this book five stars and think you will too!

Published by Thriftbooks.com User , 17 years ago
I have been looking for a book that is adventurous, beyond the impossible, and mystical. In this book, I found all of it. So far in this book I have only read about two chapters, but in those two chapters, I felt so relieved that they could put another dimension into this book in two chapters. Most likely, you would learn what Nearra (the main character) is like. I think the whole world should read it.

Published by Thriftbooks.com User , 17 years ago
It's a great book to read because you can't put it down. I am 12 years old, and I just loved this book. I'm getting the next one now. This book is a story with a lot of suspense.

Published by Thriftbooks.com User , 17 years ago
This is a great book 4 young readers. It iz about friendship, stregth, and adventure. i would recommend this book 2 any1 it is so good
Trustpilot
Copyright © 2022 Thriftbooks.com Terms of Use | Privacy Policy | Do Not Sell My Personal Information | Accessibility Statement
ThriftBooks® and the ThriftBooks® logo are registered trademarks of Thrift Books Global, LLC