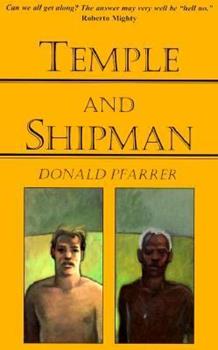 A young black man is beaten to death by white policemen. One of the officers, Jeffrey Temple, the man who threw the fatal punch, thwarts his partners' plan to plant a knife on the dead man. Temple becomes a soldier of truth. John Shipman, father of the dead kid, demands justice--but justice means one thing to Shipman and quite another to the DA. Will Shipman kill Temple? The novel follows these two men and their families from the opening catastrophe...

Published by Thriftbooks.com User , 23 years ago
Donald Pfarrer has created two memorable characters in Jeffery Temple, a white "has been" pro football player now turned cop, and John Shipman, a black businessman and Koren War veteran who has pulled himself up by his own bootstraps. The two become adversaries in a drama that becomes the ultimate moral test of their characters. Temple and Shipman is a fast-paced account of yet another tragic "racial incident" in American society. This unforgettable story has a broad appeal because we have seen many of the characters in different forms on the nightly news.

A serious articulation of justice in human relations.

Published by Thriftbooks.com User , 23 years ago
Temple and Shipman, as I read it, is a work of literature, not just a crime novel. It explores the issue of justice in contemporary American racial relations, and does so by articulating the full intellectual and emotional range of this issue. It gives voice to perennial concerns about justice, which, with a few modifications of circumstance, are the same everywhere. And it tells the story very well. I could not put the book down, and even when I was twenty pages from the end I could not imagine whether it would end with Shipman desisting, with everything poised for several possible conclusions, or for the inexorable working out of tragedy. I cannot imagine that so fair a work of literature will not come to the attention of a very large audience.

The sleeper of the year!

Published by Thriftbooks.com User , 23 years ago
Don Pfarrer's novel Temple and Shipman may be the sleeper of the year, a subtle and powerful exploration into a racial incident in which a young black man is killed by a policeman. Pfarrer brings these people alive and we become more and more engrossed until the final scene becomes like a knife to the heart. This writer knows how to make a scene come alive by caressing the detail and in this, his third novel, we get a highly polished performance. A page turner.

Published by Thriftbooks.com User , 23 years ago
Fast paced, realistic and suspenseful. Deals with both sides of a very complicated issue - namely race and police violence - in a balanced manner. The characters are believable, regardless of race. Pfarrer has tackled an important moral question with feeling and great sensitivity. At the same time he has written a crackling good novel. I found it difficult to put the book down.
Trustpilot
Copyright © 2022 Thriftbooks.com Terms of Use | Privacy Policy | Do Not Sell My Personal Information | Cookie Preferences | Accessibility Statement
ThriftBooks® and the ThriftBooks® logo are registered trademarks of Thrift Books Global, LLC