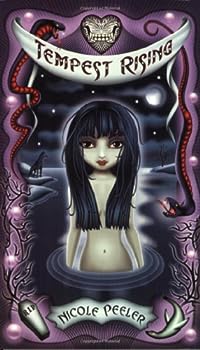 The start of a brand new urban fantasy set in small town maine where everything is not as it should be. . . Living in small town Rockabill, Maine, Jane True always knew she didn't quite fit in with... This description may be from another edition of this product.

Can you see through the glamours?

Published by Thriftbooks.com User , 12 years ago
They live among us. And who are they? Supernatural beings, of course. Gnomes. Vampires. Genies. Half this, half that. They're all here. The dog you walk day in and day out may not be just a dog. Of course, they don't want us to see their true nature, so we don't. This would, however, explain a lot about my cat -- I'm going to start watching her more closely. Perhaps her glamours will slip one day. Like all of us, Jane never saw any of these beings, despite being half one herself -- until one day they make themselves known to her. They'd watched her from afar and would have let themselves be known to her -- someday, if they felt it necessary. And then she stumbled upon a murder scene that affected their world. So, of course, they were forced to welcome her with open arms. Or some were, anyway. This turns Jane's otherwise boring life upside down. In good and bad ways both. The town outcast can always use some excitement, after all. There's a fair amount of pop culture references in this book, which typically makes me a little nervous. It makes me feel as though it might leave some readers out. Sure, my mom will get the MC Hammer reference, but some other the other songs or movies that were mentioned? Maybe not. Still it worked in this book, most are popular enough that almost anyone would have at least an idea of who/what they were -- that or the names alone gave you an idea of what they were about. So, my usual pet peeve when it comes to this, went right out the window and I ended up finding it charming -- That Jane was so often chatting with herself using books, movies, songs, etc as reference points to compare her own situations to. The cover explains to us that this book is a must for Sookie fans. I agree. It's written in the same fun spirit as the Southern Vampire Series. A totally different world though. The Sookie world really focuses on Vamps and shape shifters. This is a bit of wow who ISN'T here. 5/5. I'll be back for the next book.

An intriguing new series with a fantastic heroine!

Published by Thriftbooks.com User , 12 years ago
I'll admit it. I bought this book because of the cover. It's such a beautiful mix of tattoo art & Lisa Frank, it just popped out at me from the bookshelves. And I have to admit, it's every bit as good as I'd hoped it would be. `Tempest Rising' starts out with Jane True deciding about her dinner and thinking about her life in the small town of Rockabill. Later she'll take a swim amongst the humongous whirlpools, only to discover a dead body of a tourist visiting her town. It's shortly after this that Jane begins to realize two things. One is that she isn't all that human & the other is that the body wasn't a suicide or thrown in by accident. This book was so much better than I thought it would be. The character of Jane is incredibly well written & to be honest, I could relate to her far better than I could to other UF women. She's incredibly realistic (minus all the supernatural elements of course) & she doesn't put on airs. Also, her reactions to many of the things in the book are believable. Peeler does a fine job of writing a woman who suddenly discovers her true heritage & that the supernatural does exist. I also have to give Peeler kudos on her portrayals of many of the supernatural characters. She has vamps, goblins & such, but they aren't the "vampy vamp vamp" that so many other authors make into. Peeler goes more into the mythos & makes her supe characters into something more than just the typical fodder & clichés that tend to abound in UF nowadays. It's incredibly refreshing. It's also refreshing to see that the character of Jane doesn't take on astounding powers, nor does she immediately sacrifice all of her mental powers when the love interest of Ryu is introduced. She is enticed by him, but she doesn't spend all of the book thinking about how hot he is or spend time with needless rehashing of his looks. Again, it's a refreshing chance of pace. There's the potential for Jane to gain huge powers in future books, but it's nice that she doesn't start off being some automatic butt kicker. The story is also well written. There's *just* the right amount of information given to tease us until the big reveals are shown & I find it a good touch that Peeler makes the seemingly mundane world of Rockabill just as interesting as the court of the supernaturals. At times this book did sort of have a "teen UF" feel to it, but that may have been because the cover reminded me so heavily of Lisa Frank. Long story short, this book rocked. Hard. I'll definitely purchase the next book when it comes out & will be waiting with baited breath. I just wish I didn't have to wait until next year to get the next one...

Will the new urban fantasy readers please stand up?

Published by Thriftbooks.com User , 12 years ago
I am new to the urban fansasy genre, but I'll tell you now that I'm standing and saluting for it! I suppose I didn't know what to expect when I started reading this book but what I got was a story that I couldn't get enough of--I flew through it in four days. I've never been addicted to any illegal substances but how I ached to read the book and my constant obsession with getting my next fix is the way I'd imagine it to be. It's an easy read but also creative, intelligent and hilarious. I found Jane's internal dialogue to be one of the highlights of the book and her witty, observational commentary allowed me to relate to her easily. It contains a few words that (at the risk of making myself sound dumb) made me go grab a dictionary. If I can have a laugh and expand my vocabulary at the same time, I am in!

Published by Thriftbooks.com User , 12 years ago
I started reading this book Monday afternoon on a bench outside the church's youth ministry building while waiting for my son. For the first few chapter, I was laughing internally just so I won't get that "look" from some hardcore church members but then (I guess it was an accumulation of laugh-out-loud moments) I got to the part where Jane True slash author Nicole Peeler wrote "seaweed pubes" and "barnacle crotch" describing a specific part of Trill the Kelpie. I seriously laugh my ass off. Like the way I would laugh in the confines of my apartment. Was it awful or shallow that I find that extremely funny? The spell got broken when I realized the few people around me stopped talking with whoever they were having a conversation with and three kids stopped playing and was staring at me. So I did get the "look" that I was avoiding, it was a bit embarassing but totally worth it. Back to the book. They weren't kidding when they said if you love the Sookie books, this is recommended to you. Jane does remind me of Sookie in a lot of ways and similar tragedies but Jane and her world is her own. This book is full of our supernatural friends. Ryu the Vampire, Anyan the Barghest (like a hellhound), shape shifters who's been her neighbors, a Gnomes that claims that Rockabill is her territoty, Goblins and their with hideous face and freaky sharp teeth, a rare stone spirit that bags groceries, kelpies and skelkies, (etc... if I missed some) Their true natures are masked with glamoured. The last two I mentioned, I had a hard time wrapping their association in my head since I wasn't familiar with their nature, so I googled them just to see how they look like. I love the mystery that surrounds Jane's halfling blood. The love story of her parents, her mother's departure, her love for swimming and the way the water recharges her (reminds me of Percy Jackson when I read that). I also love the fact that she always gives her self a mental pep talk. Jane's past was a sad affair, I can emphatize yet somewhere in the book every time she feels guilty about that night with Jason, I wanted to shake her and tell her to forgive herself already, so I was happy when she and Ryu finally made it to the sack. With the murders that happened around her town, that involves a Shapeshifter and two powerful Goblins, she needed that. Not only will the characters draw you to this book but also the excitement, witty dialogues, mystery and fair amount of suspense that is written in its pages. Very impressive start of a new series. Another world to add to your collection.Second book "Tracking the tempest" will be released 2010.

Published by Thriftbooks.com User , 12 years ago
A entirely original yet familiar introduction to a new world of urban fantasy. Jane True is stuck in a ho-hum life in small-town Maine as the village pariah. Because of the nature of her parentage (child out of wed-lock, gasp!) and a freak accident that left her crippled by her own grief and the town's collective hatred she has little to look forward to. The death of another local thrusts her into a paranormal society she didn't know existed let alone was part of. In walks Mr. Steamy/Sexy vampire, Ryu, and out pops a host of unique, colorful, lovable, crazy, weird, and/or interesting characters. Jane True is somewhat reminiscent of Sookie Stackhouse as she tumbles down the rabbit hole and doesn't know who to trust. But she is her own character entirely. And I love her internal ramblings. They seriously made me laugh out loud. Nicole Peeler puts the mental ramblings we all have, but never admit to, on paper. Or at least I hope I'm that funny in my head. I especially love the whole devil on one shoulder and angel on the other inner dialogue. Only it's Jane's libido and her guilty common sense that battle. Especially when her libido was that carnivorous plant from Little Shop of Horrors. (Feed meeeeeeee!) I also love that while there are vampires in this book it is not a vampire book. Matter of fact, vampires aren't even the "ancient all powerful, apathetic to the workings of us puny humans" characters in this book. So while this is a paranormal book and the characters are similar to the myths of vampires, shapeshifters, ect, they are original but without being TOO off the beaten path. I love, love, love this series. Nicole Peeler has carved out the perfect little niche for her world and her characters and I can only hope it's long lasting. Plus, I can tell she could do side-stories on other characters because she sets this up so well. Tempest Rising fell in the same category as Halfway to the Grave, Some Girls Bite, Stray, and Nice Girls Don't Have Fangs: Books that started up an AWESOME series and that I couldn't put down.
Trustpilot
Copyright © 2022 Thriftbooks.com Terms of Use | Privacy Policy | Do Not Sell or Share My Personal Information | Accessibility Statement
ThriftBooks® and the ThriftBooks® logo are registered trademarks of Thrift Books Global, LLC