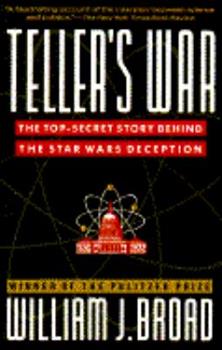 The Teller's War: The Top-Secret Story Behind the Star Wars Deception

Published by Thriftbooks.com User , 21 years ago
This book presents one aspect of the Strategic Defense Initiative: namely, the role of Edward Teller in the formation of X-ray lasers and Smart Pebbles. If you are looking for general coverage of SDI, this book is probably not for you. However, this book does present the Teller angle thoroughly and well. It portrays the scientist and his actions in the context of his psyche, the political environment in which he operated, and through the eyes of the scientists who participated in the program.The reader will come away from this book with a much better appreciation for the factors that went into some of the major decisions affecting SDI. Broad covers the technical aspects of his subject matter, without alienating those of us who are not nuclear physicists, which I suspect represents a large percentage of the population.
Trustpilot
Copyright © 2022 Thriftbooks.com Terms of Use | Privacy Policy | Do Not Sell or Share My Personal Information | Accessibility Statement
ThriftBooks® and the ThriftBooks® logo are registered trademarks of Thrift Books Global, LLC