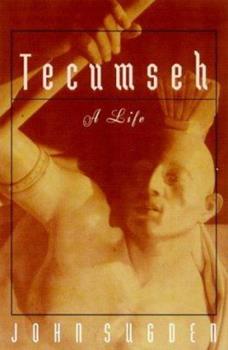 A biography of the Shawnee leader describes his vision to unite North America tribes into one Indian nation capable of forcing back the encroaching white settlers.

Published by Thriftbooks.com User , 13 years ago
The combination of excellent research and crisp narrative make this a wonderful biography. He weaves in appropriate larger issues without getting diverted from the theme of his story. One of the largest problems was discovering the truth about this legendary Indian chief, and he delivers an even-handed assessment of Tecumseh the person.

Published by Thriftbooks.com User , 21 years ago
I picked up this book after hearing a review on the radio. I could not put it down. Richly detailed, laden with facts and references which give it a credibility that many books on the topic do not have. Sugden gives us enough facts, enough history, and enough context that he does not need to fictionalize. I'm not a Tecumseh buff, had never read a book about him. This left me with not only a sense of the man but an understanding of the context of the time and environment in which he arose.

A well balanced and thoroughly researched life and times

Published by Thriftbooks.com User , 21 years ago
John Sugden's "Tecumseh" is more than a well researched biography of the great Indian chief; it is also a moving story of the clash of cultures in the Old Northwest in the late 18th and early 19th century. At no time are the Indians portrayed as the "gentle children of nature" oppressed by the wicked white man...a portrayal that has become all too common in our era where history is too often written from the viewpoint of the underclass. Instead, the Indians are portrayed as human beings ( at times noble and at times savage ) struggling to survive the whirlwind of the white world that was destroying their way of life. Tecumseh's life and character are well documented and his dream of an Indian confederacy, united to resist the American seizure of Indian land, is the centerpiece of the book. Other Indian leaders, as well as Tecumseh's brother The Prophet, figure in the narative, as do the different approaches the various tribes took in dealing with the Big Knives. An understanding of Tecumseh's life is not the only reward derived from a reading of this book. One also comes away with a much deeper understanding of the divisions within the Indian world and the various problems they faced within a way of life on the road to extinction. At the end, one senses the true depth of the tragedy, and gains an admiration for a man of great character and nobility, who gave of all his energy, in an attempt to save his people and their way of life.

Published by Thriftbooks.com User , 21 years ago
My knowledge of Tecumseh has been limited to what I have seen in a school filmstrip/tape. This book is well researched and gives a thorough description of Tecumseh's efforts to unite the various Indian tribes in an effort to keep their land from the advancing whites. The Battle of Tippicanoe against Wm. Henry Harrison is covered as is The War of 1812 in which Tecumseh allied himself with the British to advance the Indians' cause in stemming the tide against the United States. The entire book seems to be one battle after another, and I guess that's the way it was for the Indians in a futile effort to keep their land. Tecumseh's brother, The Prophet, is also covered and they appear to be two complete opposites. Tecumseh is eventually killed in battle in Ontario during The War of 1812, but he certainly has to get an "A" for effort in trying to unite the Indian tribes in their common cause of keeping their land. Their is a lot of information in the book, and at times, it gets somewhat long. However, the fact that I gave the book 4 stars instead of 5 is not the fault of the book. It would be because my background on the subject was nill when I started.

An excellent book on a remarkable man.

Published by Thriftbooks.com User , 23 years ago
Tecumseh was a fascinating person and a figure in American history who has not been given enough attention. This book does an excellent job of portraying his political genius and inspiring human character. In addition, it provides an outstanding description of the complex period in which lived. George Kirschbaum.
Copyright © 2020 Thriftbooks.com Terms of Use | Privacy Policy | Do Not Sell My Personal Information | Accessibility Statement
ThriftBooks® and the ThriftBooks® logo are registered trademarks of Thrift Books Global, LLC