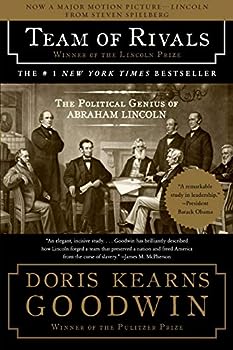 Team of Rivals: The Political Genius of Abraham Lincoln

Winner of the Lincoln Prize Acclaimed historian Doris Kearns Goodwin illuminates Lincoln's political genius in this highly original work, as the one-term congressman and prairie lawyer rises from... This description may be from another edition of this product.

Published by Elizabeth , 7 months ago
This was our required reading project, the book was inexpensive and in great condition!

Published by Lance , 3 years ago
As many people at my office know, Team of Rivals by Doris Kearns Goodwin, about Abraham Lincoln and his cabinet, is my favorite book. I am sure I am biased because I met the author and she is as wonderful in person as she is on TV. I had read her previous book about Franklin and Eleanor Roosevelt called No Ordinary Time and enjoyed it. You can tell from the writing that Goodwin enjoys her subject and does a wonderful job of capturing the time and the feelings. Lincoln is such a likable character. In reading Team of Rivals, I kept thinking how things were SO bad. How could Lincoln persevere? How could he keep going? The time and the circumstances are almost unimaginable. When people talk about how partisan politics are today or how nasty, they should read Team of Rivals. The story is sad, but inspirational at the same time. Perseverance. Strength. Character. Qualities for all leaders in all times. It's unfortunate that it sometimes takes catastrophe or calamity before we recognize greatness.

Can't wait to read the book

Published by Randy , 3 years ago
I am waiting to read it, it is 2nd on my list, but the book is in great shape and I am glad to have it in my collection.

Master politician and "very near being a perfect man"

Published by Thriftbooks.com User , 16 years ago
Frankly, until reading this book, I did not fully understand the nature and extent of the circumstances in which Lincoln included in his cabinet those who, prior to his election, were his major political opponents and who, in addition, viewed him with contempt. Specifically, Salmon P. Chase, Edward Bates, William H. Seward, and Edwin M. Stanton. He then worked effectively with each throughout the Civil War. Even more remarkable is the fact that, by the time of Lincoln's assassination, each of these four had grown to love as well as respect someone whom Stanton had once described as a "long armed Ape." Senior-level executives can learn a number of important lessons in leadership by reading this book. They include: 1. Surround yourself with whatever talent the given enterprise requires. 2. Welcome, indeed strongly encourage principled dissent. 3. Timing is not everything but often the difference between success and failure. 4. Exercise selective hearing during a contentious group discussion. 5. Unless absolutely certain, be willing to grant benefit of the doubt. 6. Exhaust opponents by listening to them. 7. Appreciate effort but only reward performance. 8. Serve "with malice toward none, with charity for all" 9. And lead "with firmness in the right." 10. When dealing with forceful personalities, focus on common interests. As Kearns quite correctly asserts, only a "political genius" could have assembled and then worked effectively with cabinet members such as Chase, Bates, Seward, and Stanton, all of whom were independent thinkers, had personal agendas, and (at least initially) considered themselves superior to Lincoln in all respects. With all due respect to Lincoln's leadership and management skills, however, it should also be noted that Bates eventually described Lincoln as "very near being a perfect man." His inherent decency and impeccable integrity informed and guided his leadership and management as president. As I read Kearns's book, I realized that only by preserving the unity of his diverse cabinet could Lincoln have preserved the Union. Had he been able to complete his second term, his "political genius" would have enabled him to fulfill hopes he expressed in his second Inaugural Address: "to bind up the nation's wounds, to care for him who shall have borne the battle and for his widow and his orphan, to do all which may achieve and cherish a just and lasting peace among ourselves and with all nations."

A knockout by Doris Kearns Goodwin!

Published by Thriftbooks.com User , 16 years ago
I just finished reading "Team of Rivals," and it is sensational. One would think "Why do we need another Abraham Lincoln biography?" Nobody would ask that question after reading this remarkable tome. Goodwin found an ingenious way to unearth new primary sources on Lincoln---by studying the diaries and careers of his cabinet members. His exceptionally talented cabinet provided stunning insights into Lincoln, but no scholar has ever really collected and synthesized these viewpoints before in such a marvelous way. My main impression of Lincoln from the book is simply that he was an incredibly good person---magnanimous, forgiving, shrewd, not quick to anger. I had forgotten that Lincoln appointed Chase to the Supreme Court of the U.S. Lincoln's forbearance and patience in keeping Chase in the cabinet----in spite of Chase's own presidential ambitions for 1864, are a marvel. My father grew up in a small town of 200 people known as "Seward, Kansas." Of course, I knew the town was named after Secretary Seward, but I never knew what a good person Seward was until I read this book. It makes me even prouder to have roots in Seward, Kansas. Most of the counties in Kansas (and many of the towns) are named after Civil War heroes. Getting to know Lincoln better, but also Seward, Stanton and the rest of the cabinet was a pleasure. This book is one of the two or three best non-fiction books I've ever read. God Bless Doris Kearns Goodwin.

Published by Thriftbooks.com User , 16 years ago
Pulitzer winner Goodwin has long demonstrated a feel for biography as a gateway into the past. In Lincoln, one of our greatest presidents, she has found an ideal subject for her attention. He is the more interesting to study because, unlike most presidents, who have sought to surround themselves in their cabinets with safe men who think like they do on important matters, Lincoln chose to build a cabinet out of men whose relationship to the president was problematic, if not downright risky. In 1861, Lincoln persuaded three of his rivals for the Republican nomination -Seward, Chase and Banks-to sit in his cabinet. They owed Lincoln nothing. As a rule, they saw Lincoln as a man of low ability and little promise, president by the accident of geography. Furthermore, some were enemies who would barely talk to each other. Yet, the cabinet did not dissolve in warfare and Lincoln established firm control over executive decisions, much to the surprise of Seward in particular, who had assumed that he, and not the president, would lead this group and be the true decisionmaker in Washington. In short while, Seward and Banks became firm allies of Lincoln; indeed, Seward became Lincoln's fastest friend in the Washington power ranks. When Stanton joined the cabinet as secretary of war, he too was converted to allegiance to Lincoln although he had publicly slighted him years before. The only cabinet member whose loyalty remained suspect was Chase, whose lust for the presidency in 1864 blinded him to his own duplicity as he sought to undermine Lincoln and gain support for his own candidacy. Chase was not above political blackmail: three times, he submitted his resignation to Lincoln and three times Lincoln, who valued Chase's substantial ability to get things done in a key office and who would rather have Chase inside his tent than outside, persuaded him to remain. Chase proffered his resignation for the fourth time in 1864. This time, he had overplayed his hand: Lincoln, who by then had secured renomination by the Republican party, no longer needed Chase and didn't need to fear him, so he accepted his resignation without further discussing it with Chase. When Chase heard, he was shocked, even though he'd asked for it. Lincoln tempered the blow by dismissing Chase's rival in the Cabinet at the same time, maintaining a balance of interests in the group, and when an opening on the Supreme Court became available, he appointed Chase, an act of magnanimity unimaginable in any of Lincoln's successors. Recently, I read a very interesting "moral biography" of Lincoln's early years (up to 1861), Lincoln's Virtues: An Ethical Biography, by William Lee Miller. Goodwin's fine biography made a good counterpoint to Miller's more limited and focused study. Both made the same point, that Lincoln succeeded as president, and excelled in the role, because he complemented his exceptional political talents and strong intellectual ability with a consistent ethical focus. There has

The Lincoln Cabinet: A Character Study

Published by Thriftbooks.com User , 16 years ago
Ms. Goodwin has created a gem of a masterpiece with her most recent book on Lincoln. In the millions of pages already written on the subject, there are no books that I know of that do in essence, a character study on Lincoln and his cabinet members. The 754 page text is one of the best ever written regarding the true and underlying nature of those men who served with Lincoln in his cabinet. While events and persons such as Antietam, Jefferson Davis, Fort Sumter, Maryland's secession attempt and many other events receive short shrift from Ms. Goodwin, this treatment is as it should be for her book concentrates on the personality and character of Lincoln and his cabinet. While Lincoln never committed himself during the convention to any of his rivals in terms of cabinet positions, to gain votes for his eventual nomination; he voluntarily chose most of his cabinet from men who were his greatest rivals for the Presidency. He did this with clear and present knowledge that they were the best men for the jobs and the country at the time. The incredibly impressive exposition of the character of these men and especially that of Abraham Lincoln and his political and personal acumen in holding them together is given new life in this book. Through careful reading and perusal of literally thousands of personal letters from cabinet members and from President Lincoln, Goodwin is able to put together a wonderfully clear and unique picture of the character of these men. In addition, she is able to paint a picture of each in words, and point out how their true character differed often from the public perception that abounded. Ms. Goodwin should be noted for her fine and excruciating work in creating this book which will remain as a must read classic for Lincoln scholars of the present and the future. All of us who track the Lincoln Presidency, 140 years after its termination are grateful for her assiduous work in creating this wonderful book.

Team of Rivals: The Political Genius of Abraham Lincoln Mentions in Our Blog 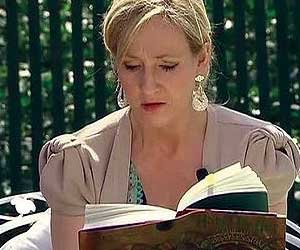 7 Books J.K. Rowling Loves
Published by Beth Clark • November 16, 2018
Long before she became the queen of Twitter or the beloved author of Harry Potter, J.K. Rowling was (and still is) a voracious reader...a habit she shares with the majority of the world's ultra-successful people. Keep reading for 7 books she loves—the author who inspired her fangirl moment might surprise you. (Hint: they have the same hair color.)
Read Article 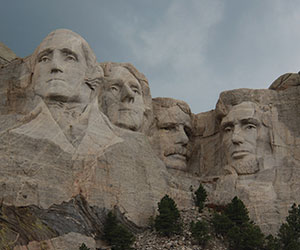