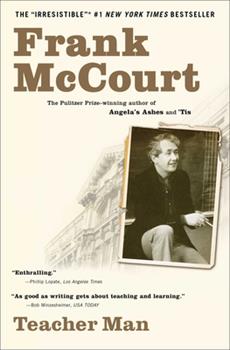 (Book #3 in the Frank McCourt Series)

From the Pulitzer Prize-winning, mega-bestselling author who wore his celebrity with extraordinary grace comes a magnificently appealing book about teaching and about how one great storyteller found his voice. Frank McCourt became an unlikely star when, at the age of sixty-six, he burst onto the literary scene with Angela's Ashes, the Pulitzer Prize-winning memoir of his childhood in Limerick, Ireland. Then came 'Tis, his glorious account of his early...

Hail to the teacher, Teacher Man

Published by Arctos , 1 year ago
Frank McCourt comes back to us one final time, his last memoir is about all the adventures he had being a teacher in the New York City school system that he didn't get to write about in Tis. In the introduction he thanks and credits his ability to be a good teacher thanks in part to his lousy childhood in Ireland, even making fun of the catholic bishop of Limerick sighting him as "A Spanish Onion in an Irish Stew". He gives an insight on his former students and their parents, not always flattering to the parents especially when a dock walloper comes into his classroom and beats up his own son in front of the class and McCourt, making you question humanity and wondering if childbirth should be licensed and heavily regulated. But it also shows how he learned from his students as well, from classroom politics onto parent archetypes. One person I lent the book to said that after reading it, (she has a daughter and Autistic son) said we need more teachers like McCourt and she cuts her children's teachers a lot more slack. If you want to round out the McCourt memoirs or if your wondering what New York City classrooms are or were like read Teacher Man.

Published by Thriftbooks.com User , 13 years ago
Having taught 6th through 8th grade and followed some of my students through their high school years, I could relate to this book. I thought it was hilarious the way Mr. McCourt related his experiences. His sense of humor was very refreshing and his experiences were so true.Teacher Man

Trials of a Teacher

Published by Thriftbooks.com User , 15 years ago
If Up The Down Staircase or To Sir With Love didn't cure you of wanting to teach, then this book might finish the job. McCourt (of Angela's Ashes) writes of his years as a high school English teacher in NYC. He own insecurities and inexperience plus the behavior problems of the teens show teaching as an often hopeless and certainly a thankless task. The book never achieves the intimacy and grit that elevate Angela's Ashes to a stunning memoir. It follows McCourt through his efforts to learn classroom skills, stabilize his marriage, and to further his career with 2 years at Trinity College. Mostly it is less than compelling, possibly due to his own ambivilence about his efforts and his lack of goals. Eventually he falls into a school situation where the students are motivated and his own teaching techniques, although offbeat, are validated. Some of the vignettes of his students might make good fodder for a Chicken Soup of the Student's Soul, but otherwise they serve mostly as fillers. Despite these criticisms, I'm ranking it a four star read due to McCourt's way with words and his willingness to allow us inside his life.

From a former student of Frank McCourt

Published by Thriftbooks.com User , 15 years ago
Almost 30 years ago I was a student in Frank McCourt's creative writing class at Stuyvesant High School. He was one of the most memorable teachers I have ever had. The class had a wide range of talent and he treated both the good writers and the weak ones with the utmost respect. After he won the Pulitzer for Angela's Ashes, I thought about how it couldn't have happened to a nicer guy or a better teacher.

Gives the Lie to the Saying, "Those Who Can't, Teach"

Published by Thriftbooks.com User , 15 years ago
TEACHER MAN, Frank McCourt's third and latest memoir of Irish-American immigrant life, is by all accounts a marvelous summary of thirty years in the teaching profession. At the same time, it is so much more. Possessed of what has to be one of the most massive inferiority complexes in the history of memoir writing, McCourt tells the tale of a rebellious, feisty, anti-authoritarian young man in search of himself. That young man struggles through the blue collar world, enters the teaching world almost as a last resort, battles his lack of self-confidence as much as he battles successive school administrators, and ultimately discovers himself in the mirror of his own students. TEACHER MAN is not just another tale of the "my two years in an inner city school" variety. Mr. McCourt's story ranges far and wide through both his personal and teaching lives, intertwining the two in ways that lend understanding to his development (and, often, failure to develop) in both areas. We follow the author as a dock worker, as a new teacher at a vocational technical high school in Staten Island, as a successful master's student at NYU and a failed doctoral student at Trinity College in Dublin, as a struggling teacher at Fashion Industry and Seward Park high schools in Manhattan, and finally, as a Creative Writing teacher at Stuyvesant High School, arguably the finest public high school in New York. As the years progress, he learns how to "read" and motivate students, respond to troublemakers, and capture their imaginations through non-traditional, frequently offbeat teaching approaches. Mr. McCourt hardly seems discreet in discussing his life and his classroom antics. He is far from saintly - sometimes loose living, always hard drinking. He describes classroom events for which he is lucky not to have been fired or sued or both, such as pulling a student's legs out from under him and causing him to hit his head as he fell to the floor. Yet for all his human frailties, McCourt ultimately comes across as a caring teacher who learns that his greatest strength is challenging his students to think differently. He compels his students to look inside themselves. He encourages them to pay attention to the details of their lives, learn their grandparents' stories, and see the richness in even the most mundane aspects of their family lives. His students don't just read novels and poems, they sing cookbooks and practice writing excuse notes, first from their parents, then from Adam and Eve to God. Throughout this charming and eminently readable book, Mr. McCourt maintains a self-deprecating and irreverent style. His approach is at times humorous, sometimes touching, and often inspiring. While he might not always have stuck to the prescribed lesson plans, he understood how to open young minds and get them to question their assumptions. He captures the essence of the teacher/student relationship with perfect pitch. Ever the iconoclast, McCourt demonstrates through his life

Almost As Good As "Angela's Ashes"

Published by Thriftbooks.com User , 15 years ago
McCourties of the world rejoice! You have nothing to lose but your tears of woe anticipating when he'd return with his next book; the foremost memoirist of our time is back. Frank McCourt's "Teacher Man" is a spellbinding lyrical ode to the craft of teaching. It is a rollicking, delightful trek across nearly thirty years in New York City public school classrooms that will surely please his devout legion of fans, and perhaps win some new admirers too. Truly, without question, it is a splendid concluding volume in his trilogy of memoirs that began in spectacular fashion with "Angela's Ashes". Indeed, we find much of the same plain, yet rather poetic, prose and rich dark humor that defines his first book, along with his undiminished, seemingly timeless, skill as a mesmerizing raconteur. Is McCourt truly now one of the great writers of our time if he isn't already, with the publication of "Teacher Man"? I will say only that he was a marvellous teacher (I still feel lucky to have been a prize-winning student of his.), and that this new memoir truly captures the spirit of what it was like to be a student in his classroom. "Teacher Man" opens with a hilarious Prologue that would seem quite self-serving if written by someone other than Frank McCourt, in which he reviews his star-struck existence in the nine years since the original publication of "Angela's Ashes". In Part I (It's a Long Road to Pedagogy) he dwells on the eight years he spent at McKee Vocational High School in Staten Island. It starts, promisingly enough, with him on the verge of ending his teaching career, just as it begins in the lawless Wild West frontier of a McKee classroom (I was nearly in stitches laughing out loud, after learning why he was nearly fired on two consecutive days, no less.). Frank manages to break every rule learned in his Education courses at New York University, but he succeeds in motivating his students, raising the craft of excuse note writing to a high literary art. He finds time too to fall in love with his first wife, Alberta Small, and then earn a M. A. degree in English from Brooklyn College. Part II (Donkey on a Thistle) has the funniest tale; an unbelievable odyssey to a Times Square movie theater with Frank as chaperone to an unruly tribe of thirty Seward Park High School girls. But before we get there, we're treated to a spellbinding account of his all too brief time as an adjunct lecturer of English at Brooklyn's New York Community College, and of another short stint at Fashion Industries High School, where he receives a surprising, and poignant, reminder from his past. Soon Frank will forsake high school teaching, sail off to Dublin, and enroll in a doctoral program at Trinity College, in pursuit of a thesis on Irish-American literature. But, that too fails, and with Alberta pregnant, he accepts an offer to become a substitute teacher at prestigious Stuyvesant High School (The nation's oldest high school devoted to the sciences and mathematics; it
Copyright © 2020 Thriftbooks.com Terms of Use | Privacy Policy | Do Not Sell My Personal Information | Accessibility Statement
ThriftBooks® and the ThriftBooks® logo are registered trademarks of Thrift Books Global, LLC