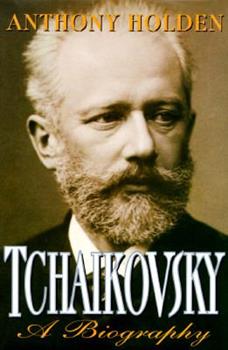 Written for the layman, this new biography of the world's most popular composer contains previously unrevealed material gathered from Russian files about his probable suicide at the age of 53 after being threatened with the exposure of his homosexuality. of photos.

A PROVOCATIVE AND COMPELLING BIOGRAPHY OF A POPULAR COMPOSER

Published by Thriftbooks.com User , 12 years ago
Tchaikovsky (1840-1893) was the best-known composition student of pianist/composer Anton Rubinstein, and he is one of the rare classical composers who has written some works that are "recognizable" by popular audiences. Holden's biography contains a wealth of detail that illumines the life of the composer. Not necessarily "immediately" popular in his own lifetime, Anton's brother Nikolay Rubinstein called Tchaikovsky's First Piano Concerto (perhaps now his most popular piece) "Worthless ... trite ... vulgar," and more. Tchaikovsky wrote several religious pieces, yet "To Tchaikovsky, religion was more a prophylactic against his woes than an intellectual conviction." "A chronic incomniac, he increasingly sought solace in coffee and card games, liquor and cigarettes---four 'vices' he would indulge all his life, often chiding himself in his diaries." Tchaikovsky's homosexuality is widely-known these days, of course. (Holden notes that fifteen was "the age at which, all his life, he found young men at the height of their sexual allure.") His secrecy about his proclivities is understandable, since "Homosexuality was not merely illegal in Russia, punishable by public disgrace, loss of civil rights and exile to Siberia; it was widely regarded, even in the most liberal of circles, as a 'vice.'" He briefly married a composition student of his, but they broke up after about three months (even though remaining legally married). "It was, in his own mind, his homosexuality which had caused 'an unbridgeable gulf' between him and the rest of society. 'It lends my personality an aloofness, a fear of company, excessive shyness, a mistrust of everyone---in sum, a thousand qualities which make me ever more unsociable." He even concluded that "My whole life has been a chain of misfortunes because of my sexuality." He had even urged his younger brother to "cure" himself of his homosexual leanings "before it is too late." Tchaikovsky died nine days after the premiere of his 6th Symphony ("Pathétique). His death was supposedly due to contracting cholera from drinking unboiled water; Holden comments that "that Tchaikovsky died of cholera, the result of a tragic accident---inevitably became the received wisdom ... it was believed by the outside world for the best part of a century." However, Holden argues that Tchaikovsky took his own life, by ingesting arsenic in the form of rat poison; it took four horribly painful days for him to die. Holden's biography is richly detailed, and delves in detail into the various "controversies" about the composer's life, and is HIGHLY RECOMMENDED!

the enigma of tchaikovsky's death

Published by Thriftbooks.com User , 12 years ago
If Anthony Holden is correct in his assessment that David Brown's four-volume is the best "critical and biographical survey" of Tchaikovsky's musical output, then Holden himself--a prolific and accomplished biographer--has probably written here the best-researched and most insightful biography of the composer himself. Holden begins by pointing out that the biography written by Tchaikovsky's brother Modest is in many respects not to be believed, since Modest--himself a homosexual--went to great lengths to conceal the fact of his brother's homosexuality. Modest also did everything he could to propagate an unlikely story: that his gifted brother killed himself--either carelessly or deliberately--by drinking an unboiled glass of water and contracting cholera. Why would Tchaikovsky have done this, knowing full well that there was a cholera epidemic in St. Petersburg? Having just conducted the first performance of his Pathetique Symphony, in excellent health, and financially secure now for the first time in his career, would he really have been so careless--or so suicidal--as to throw his life away just as his reputation was becoming secure? Holden posits an intriguing alternative: that Tchaikovsky was essentially murdered--forced either to take his own life, or to be "outed" and ruined--by a conspiracy which included other jealous Russian composers. An excellent read, and an insightful and sympathetic look at a man whose torments--which so informed his music--may also have led, ironically, to his premature death.

Published by Thriftbooks.com User , 14 years ago
"The notion that one day people will try to probe into the private world of my thoughts and feelings...is very said and unpleasant." So said Pyotr Ilyich Tchaikovsky, one of the most famous composers of all time, in 1880. Fortunately for Tchaikovsky fans of today, Anthony Holden has done just that and has done it well. Tchaikovsky: A Biography (Random House, 1996) provides a laymen's view of the turbulent life of the ill-fated composer, approaching both the music and the man equally. Holden's analyses of prominent works do not, as most might fear, rely heavily on knowledge of musical theory, but stem mostly from events that took place in the composer's life at the time a work was written. Commentary on Tchaikovsky's personal life and anecdotal references are written humorously and with the kind of cleverness that comes with true enthusiasm for the subject. Holden uses, as much as possible, direct quotes from those who knew the composer best, working them into the text with a narrative style. The often told of and bizarre relationship that Tchaikovsky had with his long time benefactress Nadezhda von Meck, is also brought to light in great detail. Unlike many biographers, who believe that Meck withdrew financial support upon discovering the composer's homosexuality, Holden contends that Meck's assertions of financial ruin were in fact true, owing to blackmail from her son-in-law! As with any biography of Tchaikovsky, the most intriguing moments come with the discussions of his homosexuality and his questionable death. Like a detective presenting a scenario, Holden writes the last two days of Tchaikovsky's life with the audience directly watching, "We find Tchaikovsky at the library, looking up a score..." He follows the detailed and highly questionable testimony of Tchaikovsky's brother, Modest, who was with him in the last few days of his death. On the question of death, Holden sides (tentatively) in the recently presented "court of honor" theory, which suggests that a handful of Tchaikovsky's fellow alumni gave him a three-prong ultimatum in censure for his homosexuality. Obsessively in fear of being "outed", Holden believes that the composer chose the last of the options and poisoned himself with arsenic rather than live in disgrace. Given the obvious problems with the testimony of Modest, Holden suggests that the composer's brother knew about the suicide and was covering it up for fear that the "court of honor" might turn on him (Modest was also homosexual). In all, Anthony Holden's work is not just an excellent example of investigative history, but a wonderfully told story tarnished only by the unfortunate end of its main subject.

Published by Thriftbooks.com User , 21 years ago
A bold look at a difficult man. Tchaikovsky, terrified that his sexuality would become a topic of scandal, split his powerful sexual response between (a) male members of his family on whom he showered very intense affection and (b) young men, sometimes young boys, who were often rough-trade prostitutes. Anthony Holden offers a succinct, persuasive, well-written portrait. Although short on analysis of Tchaikovsky's music (the man was a genius at representing emotion), Holden is especially good at examining the composer's emotional relationships and the causes of his death: did he die of cholera or arsenic? by infection or suicide? If you like biographies of musicians, you'll love this one.

Published by Thriftbooks.com User , 21 years ago
Many kudos to Mr. Holden for this spectacular effort! This is what biography is to be! A careful reconstruction of a life, with logical extrapolation of missing points and a compelling analysis of historical inconsistencies in this unique figure. I especially appreciated the author's relative absence from the narrative (i.e., he was not telling us constantly how he felt about the facts of the biography). Gratefully, he did not editorialize about the biographies central issue: Tchaikovsky's homosexuality. The issue too often derails serious historical research, either to condemn or to convert to the cause. A sheer delight of a read.
Copyright © 2020 Thriftbooks.com Terms of Use | Privacy Policy | Do Not Sell My Personal Information | Accessibility Statement
ThriftBooks® and the ThriftBooks® logo are registered trademarks of Thrift Books Global, LLC