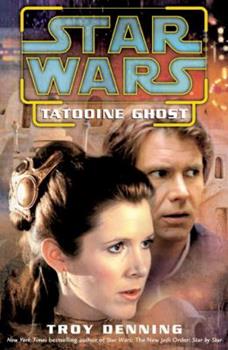 This is a special Star Wars adventure featuring Princess Leia and Han Solo, by the New York Times bestselling author of Star Wars: The New Jedi Order; Star by Star.

Published by Thriftbooks.com User , 18 years ago
Troy Denning's Tatooine Ghost is a joy to read! Yes, it is an Expanded Universe novel and if you haven't read any of the previous "further adventures of..." novels, newcomers will not get any of the references to other works (such as Dave Wolverton's "Courtship of Princess Leia," Timothy Zahn's Grand Admiral Thrawn trilogy, or Dark Horse Comics' Dark Empire series, all of which are alluded to here. What makes this novel worth reading is the connection between the classic trilogy, expanded universe, and the current films. The Force is with Tatooine Ghost!

This is what all STAR WARS books should be like!

Published by Thriftbooks.com User , 18 years ago
Now this is what all Star Wars books should be like. Never before have I read a SW book that is so alive, so true to the spirit of the films and the characters in them. I finished this book in a day, and while I was reading it I felt as though Han and Leia could have leapt off the page while John Williams' score played in the background any minute.Tatooine Ghost got back to the roots of A New Hope and engaged in old-fashioned fun, fast-shooting blasters, witty one-liners, and clumsy but endearing sidekicks. However, that edge and dynamic of Empire Strikes Back with Han and Leia's truly exceptional written relationship is definitely present and the best part of the book by far. Additionally, the austere, philosophical nature of the first movie (The Phantom Menace) is also visible in Leia's dreams and thoughts of the past and how her parentage relates to it. All the best aspects of the SW films rolled into one magnificent book.I will say now I'm a Han/Leia fan, and have been waiting for years for someone to write them right and in a relationship that is a natural development from the one we saw in the movies - one that is both loving and respectful, passionate and affectioante, with some playful teasing and light-hearted banter as well. Finally, Tatooine Ghost did just what many, many Han/Leia fans have been wanting to see for years. It's about time!My favorite scene has to be the one where Han and Leia spend the night together after rescuing Han. I'm so glad Del Rey let Denning write a "hot" scene between them, an element of their relationship all Han/Leia fans are dying to see.It was great to read a book that was absolutely chock full of my favorite characters - Han and Leia, and even Chewie. All of the main trio are characterized brilliantly, but Leia's shines above the rest as far and away the best portrayal of Leia ever seen in the EU. One of the best parts about this book was that there were no annoying EU characters like Mara Jade in sight! (Sorry...Her becoming a major character was a big turn-off for me in the books.)If the H/L short story Denning wrote felt like a slice of chocolate cake from heaven, then Tatooine Ghost felt like eating the entire chocolate cake all at once (The only difference is that too much H/L never makes me sick.) I hope Denning comes back to write more Star Wars stories on Han and Leia. He would definitely be my pick in the future.

Published by Thriftbooks.com User , 18 years ago
In his second full Star Wars novel, Denning tackles new territory. Tatooine Ghost tells of the time right after Han and Leia's marriage, but before Zahn's classic trilogy. Denning also has resources that none of the other pre-New Jedi Order authors had: Episodes I & II. He makes great use of these resources by having Leia discover more about Vader's origins and giving her a picture of of her father before he was Vader. Denning perfectly captures the characteristics of Han and Leia. Plus it is equally gratifying to see Chewbacca return to the expanded universe. This is by far the best non-NJO Star Wars book to come out in this millenium. I highly recommend it to all Star Wars fans, it is truly a great and exciting read.

Troy Denning should be writing every Star Wars book

Published by Thriftbooks.com User , 18 years ago
this is easily the best Star Wars book I've ever read, and i've read about 110-120 of them, everything but some of the Jedi apprentice series. troy Denning really should write every star wars book. this book has everything i want, except for maybe a huge battle (it had plenty of smaller ones though) and not enough Luke for me. still, this wouldn't drop the rating at all. the connections to the past were eerie, and so very well thought out i was amazed. when they talked of a great Boonta Podrace in which a human boy won, it took me a minute to make the connection. likewise, the use of Kitster, Wald, and Shmi was incredible. one thing that made this book awesome was the indirect use of Gavin Darklighter, my favorite character. his family was a featured part of the book, as was the remains of the Lars clan. The thing that most struck me was the place that the Tuskens avoided calling it ghost town. that puzzled me because it sounded familiar. then it was revealed that a clan of sand people was found hacked to pieces, all dead, about 30 years ago. make the connection yet? the book was great, and the first in the time directly after the original trilogy. it showed me how much i missed them. i would recommend this book to any person who like science fiction, and this book goes on my top ten all time star wars books right there with star by star. (conveniently by troy Denning.) buy this bookp.s. if I'm still stumping you with the sand people tribe hacked to pieces, that would be Anakin's ill-fated attempt to save his mother and then releasing his anger for the first time

FINALLY an excellent book for the SW galaxy

Published by Thriftbooks.com User , 18 years ago
What a wonderful book this was! I read my library's copy, and loved it so much I went out & bought a copy for myself, not even waiting for paperback!This is a Star Wars adventure the way it was meant to be written, before the NJO came along and messed everything up so badly. Denning writes the characters so true to their movie personalities that you feel this book is simply a continuation after Return of the Jedi ended.He has done a masterful job of tying together the prequels and the Expanded Universe after the Original Trilogy. At the same time, he has managed to spackle-and-paste omissions of logic made by others: Qui-Gon's apparent lack of compassion for Anakin's mother in Ep. 1, Leia's completely out-of-character behavior in the dreadful "Courtship of Princess Leia", and even how a boy named Luke Skywalker could remain hidden in plain sight on his father's homeworld, and not have someone, somewhere, alert Darth Vader to the presence of another Skywalker.Denning has made Leia the strong, competent woman and Han the dashing smuggler of the movies; he creates fascinating new characters; and he paints haunting portraits of secondary characters such as Kitster and Shmi. He gives nods to other favorites by mentioning Wedge Antilles, the Wraiths, and Thrawn.My only quibbles with this book: The Tusken Raiders tell a story-dance of a warrior who slaughtered an entire camp with a buzzing sword; if Anakin killed every single Tusken, how would the other tribes possibly know their manner of death? A single line saying that one escaped would have cleared this up. And the visit to Obi-Wan's hut, while providing a heart-wrenching glimpse into his guilt and sorrow, seemed nothing more than a plug for Timothy Zahn's upcoming novel on the Outbound Project.Minor quibbles only. This book is an excellent read, highly recommended for any Star Wars fan, but especially for those who are fed up with the abysmal NJO. Denning writes as if he truly loves the Star Wars galaxy and the familiar characters we love, not as if writing a book with Star Wars on the cover is just a gambit to get name recognition with fans.I can only wish that we would see more books like this. Del-Rey editors, this means you: are you paying attention?
Copyright © 2020 Thriftbooks.com Terms of Use | Privacy Policy | Do Not Sell My Personal Information | Accessibility Statement
ThriftBooks® and the ThriftBooks® logo are registered trademarks of Thrift Books Global, LLC