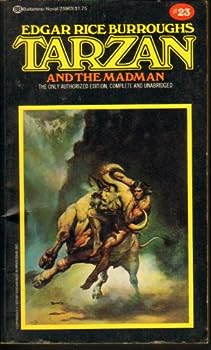 The Lord of the Jungle discovers a race of intelligent apes in a remote region of Africa This description may be from another edition of this product.

Nice end to the series

Published by Thriftbooks.com User , 11 years ago
In 1964 a new Tarzan book was published. The twenty-third book of the Tarzan series had not been released when it was completed in 1941, but placed in a safe while Burroughs left to be a war correspondent. His son Hubert published the book posthumously. The Ballantine edition on this page is the first paperback edition. In the story, Tarzan's reputation of his cunning, animal like strangth and bravery has grown so far and wide that people he has never met are using his name for profit, and in some cases ruining his reputation. Tarzan fights back as only he knows how. You have to wonder if the author wrote this due to his own frustrations with merchandise being sold with Tarzan name or image that was unauthorized by him. The book that was printed after this was actually a collection of 3 short Tarzan stories, known as Tarzan and the Castaways.
Copyright © 2022 Thriftbooks.com Terms of Use | Privacy Policy | Do Not Sell My Personal Information | Accessibility Statement
ThriftBooks® and the ThriftBooks® logo are registered trademarks of Thrift Books Global, LLC