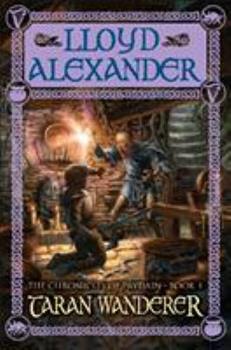 (Book #4 in the The Chronicles of Prydain Series)

Taran Wanderer , the fourth book in Lloyd Alexander's The Chronicles of Prydain Taran is an Assistant Pig-Keeper no longer--he has become a hero. Now he dreams of winning the hand of Princess Eilonwy, but how can someone who has spent his whole life caring for a pig hope to marry royalty? Taran must find out who he really is. Eager to learn his origins and hoping to discover noble roots, Taran sets off with the faithful Gurgi. The journey takes the...

Amazing Story of Courage,Friendship and the Search for Truth

Published by Thriftbooks.com User , 17 years ago
Taran Wanderer was not given the Newbery Award like it's successor The High King; nor was it awarded a Newbery Honor medal such as it's predecessor The Black Cauldron. However, Taran Wanderer is the most complete book in the Chronicles of Prydain. Lloyd Alexander deftly tells the tale of Taran's quest to find his parentage in hopes of being decendant from noble blood. Gurgi, Taran's faithful sidekick journeys with him through far off parts of Prydain. Along the way, old friends and faces reappear such as Fflewwder Fflamm the bard/king, Doli of the fair folk, Kaw his hijinxing bird, Llyan the giant cat who Fflewwder now rides as his mount and King Smoit whose army rescued Taran and his companions at the end of The Black Cauldron. Taran's journey to find himself takes him to a number of different trades such as metallurgy, weaving, farming and pottery. He also meets his fair share of adventure and enchantment along the way. At 254 pages Taran Wanderer is the longest book in the series but it reads the fastest because there is so much action and uncertainty in what Taran will finally find out about himself. The Chronicles of Prydain still stand as some of the greatest fantasy stories ever written and Taran Wanderer is the BEST book in the Chronicles of Prydain. Highest Recommendation.

Published by Thriftbooks.com User , 17 years ago
This book is definitely the most unique of all the Prydain Chronicles. Instead of urgent quests to find magical pigs, destroy evil cauldrons or rescue a beautiful princess--with good constantly pitted against the forces of evil--this volume is instead focused on Taran finding out about himself.Instead of a quest resolved in a matter of weeks or months, this story covers a couple of years, years in which Taran travels from one end of Prydain to the other, first in search of his parents and then in search of his own place in the race of men.His motivation lies in a desire to be worthy of the Princess Eilonwy's hand in marriage; she's absent from the story, still on the Isle of Mona, so Taran's only constant companion is the loyal creature Gurgi.Old friends Fflewddur and Doli make brief appearances, though the bulk of Taran's time is spent meeting new people: the old farmer Aeddan and his wife, who fight for survival on a land impoverished by the Death-Lord Arawn; Goryon and Gast, petty lords whose bark is worse than their bite; Morda, the enchanter who despises the race of men in its entirety; the outlaw Dorath and his men; the shepherd Craddoc; and the people of the Free Commots: Llonio the lucky, Hevydd the smith, Dwyvach the weaver, Annlaw the potter, and Llassar the farm boy.The lessons Taran learns in his travels aren't always obvious or profound for the casual reader, and the limited amount of swords, sorcery and peril may be unusual for some. However, the transition Taran makes into manhood is handled convincingly and realistically with each step he takes.

A classic, whatever your age

Published by Thriftbooks.com User , 21 years ago
Taran Wanderer, the fourth book of the Prydain chronicles, is, in my opinion, the best book in a wonderful series. All four books focus on the character of Taran of Caer Dallben, an orphan who is raised by a wizard (Dallben). The plot of Taran Wanderer focuses on Taran's quest to find out who his parents were. Taran hopes that he will find that he has the "noble" blood that he believes would give him the right to ask the Princess Eilonwy to wed him. Needless to say, he does not have an easy time, wandering the length and breadth of Prydain searching for parents he does not know, who can barely remember him. The book's joy, however, does not lie only in its plot, but also in the development that Taran undergoes through the course of the book. In Taran Wanderer, more than any other book, Taran grows into manhood. The trials he passes through temper and shape him, as he journeys through both familiar and strange lands. His experiences teach him lessons, but he learns even more from the people he meets. Make no mistake. This is not a pure novel of character. Taran travels from one end of Prydain to the other, meeting kings and wizards, and also farmers and tradesmen. Along the way, he has many adventures and faces many hardships. As said earlier though, the solid plot is not the highlight of this book. The characters are. The myriad of people Taran meets in his travels provides a welcome break from the pattern of the other Prydain chronicles, where almost everyone seems to be either a king, a bard, or a magician (or some combination of the three). After so many books walking the heights, Taran finally returns to earth. For those who have read the earlier books, you will see many familiar faces, including faithful Gurgi, the (not quite) bard Fflewddur Fflam, King Smoit, and even three old friends from the Marshes of Morva. You'll also be intrigued by new characters, some of whom have had hidden influences on characters you already know. And through it all, the beautiful tapestry of plot that Lloyd Alexander has woven will captivate you. Taran Wanderer is a great book. I recommend it to readers of all ages.

Alexander at his peak--and that's saying something

Published by Thriftbooks.com User , 22 years ago
Though "Taran Wanderer" didn't win a Newbery, it should have. It's different from the other Prydain Chronicles; there are no grand battles, no high councils, and worst of all, no Eilonwy. Instead, Alexander focuses on Taran alone, who seeks to know the truth about himself. The book is clever, of course, especially in the early quarrel between Gast and Goryon, but dark as well. Taran finds that he is capable of doing things he would never have thought he could do, and that realization is not an entirely happy one. He also discovers that there are other things he cannot do, even though he wants to. None of this sounds profound--we all know these things. At least, we know them with our brains, but not as often with our hearts. Alexander makes us know not with text-book knowledge, but vicarious experience. That's what all great books do.

Published by Thriftbooks.com User , 22 years ago
I was a little guy when I first came across the Prydain Chronicles. I had long since lost the books and had forgotten that they even existed. And then one day I saw "The Black Cauldron" on sale for 25 cents at a Garage Sale. Right away my mind jumped back to my youth. Needless, to say I bought the book as well as the complete set. Now that I am an adult I am amazed at how inspiring the books are. There is so much behind the words written in these books and I am grateful that I took the time to re-read them 15 years later! I think the idea of Taran searching for his history is reflective of many things in the lives of all people - young and old! There is a magic to these pages that I hope will not become a rarity in books written by todays authors. Alexander doesn't write books, he creates visions. I'm just glad that he decided to share his visions with many others.
Copyright © 2022 Thriftbooks.com Terms of Use | Privacy Policy | Do Not Sell My Personal Information | Accessibility Statement
ThriftBooks® and the ThriftBooks® logo are registered trademarks of Thrift Books Global, LLC