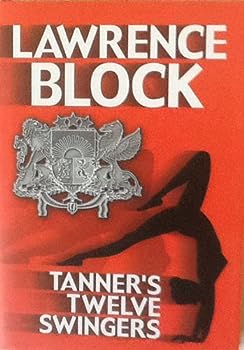 (Book #3 in the Evan Tanner Series)

This description may be from another edition of this product. Sometime spy Evan Tanner has accepted impossible assignments for many reasons: money, thrills, to have something to occupy his waking hours (twenty-four of them every day, in fact, since battlefield...

Fast and humorous trip with a master spy

Published by Thriftbooks.com User , 14 years ago
A delightful fast read with plenty of action and humor. Evan Turner is a spy for--well, you name it since he doesn't really know the name of the agency he works for! A good friend asks Tanner if he would go to Latvia to get his girl friend out of the country and bring her to the United States. Tanner reluctantly gives in and agrees knowing that Latvia is one of the old Soviet nations that do not allow anyone in or out of their country. Tanner knows so many connected people so he feels he can do this without getting into trouble. Besides being a well-connected spy Tanner loves his women and seems to have one in every nation. He also has many friends in many nations that know Tanner well and owe him favors, which helps him in getting in and out of various countries. Any master spy can do this, correct? If your name is Evan Tanner or one of his aliases you have that freedom almost everywhere. Almost! Tanner starts his trip to "rescue" the girl out of Latvia. It seems the girl is a gymnast on the national team. As Tanner goes across various borders, some legally and some with forged papers, he looks up his friends in those countries to get help. Most do help him one way or another. But when it comes time to take the girl out of Latvia, along with a few things Tanner has picked up along the way for which he promised to deliver in other nations as he went, he runs into trouble. By the time he makes his final plans for leaving Latvia he has accumulated more people to smuggle out of a nation he is not even supposed to be in. If this sounds complicated, it is, but only for Tanner. The reader can understand every move and action that is made due to Lawrence Block's smooth writing. Even though this is a short book it packs plenty of action and fun into those pages. As I read it I was thinking how some authors would make a six hundred-page story out of all that occurred in this book. Block shortened it and kept it active and interesting.

Published by Thriftbooks.com User , 17 years ago
Of the 7 Tanner books I've read, I liked this one the best. They're all fun; this was just a bit more so.
Copyright © 2020 Thriftbooks.com Terms of Use | Privacy Policy | Do Not Sell My Personal Information | Accessibility Statement
ThriftBooks® and the ThriftBooks® logo are registered trademarks of Thrift Books Global, LLC