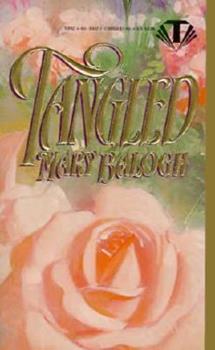 This description may be from another edition of this product. Mourning the loss of her husband, who died in the Crimean War, beautiful Rebecca Cardwell enters into a marriage of convenience with her husband's best friend, only to discover that he has awakened...

Published by Thriftbooks.com User , 13 years ago
This book made my heart ache for all the characters. This book did an excellent job of making you feel the despair in the situation. I disagree with the reviews that thought this book was too long - if anything, I thought that there could have been a little more character transition for Julian. But I loved it! Now I just have to try and find a copy to buy.

The Magnificent Balogh does it again!

Published by Thriftbooks.com User , 18 years ago
Tangled is a beautiful and complex love story that resonates with honesty and poignancy. I never felt I was reading about Rebecca, David and Julian; I felt as if I knew them. Balogh gives a better feeling for the Victorian period than any other writer of the genre. Rebecca leaves you feeling such sadness for what it must have been like for women in that era and David is truly the most magnificent antidote to Victorian repression. We should all have a David in our lives! Balogh does not create black and white characters. The heroine, Rebecca, is flawed and the villain, Julian, does have a heart and a good soul in the end. Truly a tangled, but satisfying love story.

Balogh at her best: an impossible love triangle

Published by Thriftbooks.com User , 21 years ago
This is an incredible book: the first time I read it I couldn'tbear to put it down. Rebecca had married Julian, David's honorarybrother - they'd grown up together on David's father's estate. ButJulian was killed at war - and there's a dreadful secret there which David dares not reveal...The reader is shown the truth about the characters of the two men, but Rebecca remains ignorant... Balogh does eventually resolve this seemingly impossible situation, but not before all three main characters arrive at a better understanding of themselves and each other.As usual, Balogh's characterisations are excellent. One thing I really like about this writer is that she almost never writes a completely irredeemable character; even her villains tend to have some trace of good in them (and indeed, in some of her stories villains of previous books end up as heroes). She also does an excellent job of portraying emotions here, particularly the emotions of two characters who just have no idea how to communicate with each other.A beautiful and memorable love story.

Balogh does it again: this is a wonderful book

Published by Thriftbooks.com User , 21 years ago
This is an extremely heartwrenching novel by Balogh: the way she writes the heroine torn by her feelings for two very different men is just so well done. Balogh shows Rebecca's unwilling attraction to David extremely well. In the beginning she dislikes him (for reasons which seemed to be valid at the time, but all is not what it seems), but her feelings change gradually, in a way she does not even herself notice. Rebecca and David's inability to talk to each other, while it compounds their awkward situation, is very credible in the circumstances.And, since all Balogh's characters, including minor characters, are always very well drawn, Julian is portrayed extremely sympathetically. Given his 'back-story' it would have been very easy to paint him as the villain, but Balogh avoids that temptation and shows him as the flawed but well-meaning person he seems to be.I thoroughly recommend this book.

Published by Thriftbooks.com User , 23 years ago
It reminds me in some ways of the Robert Frost poems the one about the two roads, except in Rebecca's case she was given a chance to taste what her life could have been like if she married David instead of Julian. When Julian came back it seemed to be the end of the type of life she had always craved for. The story is heart breaking in some part, as Rebecca and David were placed in a situation which they could not escape from because they were not ruthless enough to place their own happiness infront of others. The use of circumstances was wonderful and Balogh was incredibly consistent throughout the whole story.
Copyright © 2020 Thriftbooks.com Terms of Use | Privacy Policy | Do Not Sell My Personal Information | Accessibility Statement
ThriftBooks® and the ThriftBooks® logo are registered trademarks of Thrift Books Global, LLC