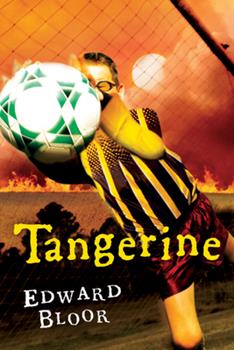 Paul Fisher sees the world from behind glasses so thick he looks like a bug-eyed alien. But he's not so blind that he can't see there are some very unusual things about his family's new home in Tangerine County, Florida. Where else does a sinkhole swallow the local school, fire burn underground for years, and lightning strike at the same time every day? The chaos is compounded by constant harassment from his football-star brother, and adjusting to...

Tangerine is a thrilling

Published by Bethany N. , 4 months ago
The different settings and character presentation truly add feeling to the story. Tears will be shed, and cheers can be heard throughout the different phases

Published by Deb , 1 year ago
I read this book in Jr high and loved it so much, I had to purchase and read as an adult! It is such a good book, It pulls you in!!! He may be kinda blind, But he truly sees what others don't want to see! This book is great for teens and Adults!!

Published by Thriftbooks.com User , 14 years ago
Tangerine by Edward Bloor I really enjoyed this book. Bloor does an amazing job sucking the reader into the story and keeping you interested with all the twists and turns in the book. Each character is unique and sometimes unpredictable, but I felt like I could connect with some of them and understand their feelings and motives. Paul Fisher and his family are moving from Houston, TX, to Tangerine, FL. Paul is forced to try and fit in at a new school while living in his brother's shadow. Erik Fisher, Paul's older brother, is becoming a football legend. The young star is a placekicker and hoping to get a scholarship for college and play in the NFL. Erik and Paul's dad is always wrapped up in the Erik Fisher Football Dream that he barely pays attention to Paul at all. Soccer was Paul's sport. He played goalie even though he had to wear goggles and thick glasses because of an accident that occurred when he was younger. His parents said he stared directly at a solar eclipse and was almost blinded. Paul doesn't believe this is what really happened, but his memory is blank. At his new school, Paul's mother files an EIP because Paul is visually impaired. I was really surprised that he couldn't play soccer when the coach saw his EIP because you expected soccer to be the thing to bring him out of his brother's shadow. Conveniently enough, half of Lake Windsor Middle School is swallowed by a sinkhole and Paul and his friend Joey were part of the rescue team that helped people get out and escape the disaster before it buried them. I think this shows Paul acts very mature for his age. When I was reading the book, I kept thinking he was older, but the book would always remind me that he was only in seventh grade. After the natural disaster, Paul is relocated to Tangerine Middle, his second chance. While attending Tangerine Middle, Paul joins the soccer team because his mom threw out the EIP. He quickly makes friends with his teammates after a rough start. Together they face school, soccer, and flash frosts. Through it all I feel Paul's relationship with his friends is strong. They do face many conflicts such as standing up for your friends against people who are hurting them. Meanwhile, Erik is gaining fame from his amazing kicks from as far as 50 yards. Unfortunately, the neighborhood has taken a turn for the worst. When they tried to put out the muck fires, they accidentally created a breeding ground for mosquitoes, and a lot of houses have a termite problem. There have also been mysterious robberies. Paul even witnesses a murder. Tangerine was an amazing book. The plot and characters make it an enticing story for teenagers, but I also recommend it to adults. The story contained family conflicts that may seem out of the ordinary but are completely realistic. I loved how quickly things happened and changed in the book. It made me want to keep reading until the very end. To find out the mysterious secret of Paul's eyes and his past, read Tangerine

The best book since "Holes"

Published by Thriftbooks.com User , 17 years ago
Here's a blow by blow of my experiences while reading, "Tangerine". After twenty pages I said to myself, "Hm! The man can really write!". After fifty pages I said, "Wow! This book is as good as `Holes'!". After one hundred and fifty pages I was fully engrossed. After two hundred and fifty pages I was bodily grabbing people off of the street, forcing copies into their hands while chanting something along the lines of, "One of the greatest kid's books ever written!", or words to that extent. Now that I've finished the book and given myself a little time to reflect I can clearly decide whether or not this initial euphoria was short lived or not. Ladies and gentlemen, I am more than a little pleased to report that I was right all along. "Tangerine" is one of the greatest children's books to be written in the last ten years. It is brilliant, socially conscious, filled to the brim with sympathetic (and uniquely unsympathetic) characters, and funny to boot. Paul Fisher is moving again. His father is a civil engineer by trade, so Paul's a little used to picking up and leaving for the next town. In this particular case, the family's moving to Florida to live in a gated community. Once there, each member will be able to start doing what they enjoy best. His brother, Erik, will continue to wow everyone with his football skills, his father will continue to worship those skills and spend all his time with his eldest, his mother will join the community's neighborhood association, and Paul will join his school's soccer team. Paul's a goalie by training, and despite his eye troubles (he has almost zero peripheral vision due to a mysterious accident in his youth) he's the best. Not like anyone notices, of course. The rest of the family is too caught up in what Paul has wryly dubbed the Erik Fisher Football Dream. The fact that Erik is a seriously disturbed individual seems to go entirely unseen by Paul's parents and it becomes clear that when his brother's activities go from threatening to criminal, Paul's the only one who can come out with the truth. Along the way he has to battle lightning storms, sinkholes, underground fires, flash frosts, and angry neighborhood associations. That's the plot in its barest form. As I've copied it down here, I haven't even begun to delve into the fact that Paul transfers himself from his local hoity-toity school in the suburbs to a far more rough and tumble public facility. He makes friends with the kids in that school, faces racism on the part of his old school chums, and begins to understand a little more about white privilege. What other school age novel deals with racism, classism, social consciousness, and environmental concerns and so well at that? The precarious nature of Paul's new home becomes clearer and clearer when expensive koi fish are eaten by the native ospreys, muck fires spring up regularly in the backyard, and termites start eating the houses. The more the humans attempt to bend nature to

chilling and insightful, I couldn't put it down

Published by Thriftbooks.com User , 20 years ago
Paul Fisher's family moves to Tangerine, Florida; he is nearly blind but cannot remember the incident which led to this condition. His older brother is a football star and his parents' favorite; eventually Paul realizes his dream of playing soccer and uncovering the cause of his near-blindness.Tangerine is an excellent book for teenage readers. The narrative is written in Paul's voice, which should appeal to young readers.Bloor brings a sensibility regarding race and ethnicity to the story that is rarely present in good books for teenagers. He also brought a ready enough eye and pen to critique the newness and artificiality of suburbia, particularly Florida's suburbia. From page 71-- "It was strange to see an old packing plant, to see an old anything. But it was also comforting that something around here has a history. That something actually belongs here." I really enjoyed reading Tangerine. It's nice to read a book written for teenage readers that doesn't talk down to them in any way. Paul is a neat and well-drawn character. His problems are problems that people can understand.Tangerine is a great read. I'm 33 years old, and I loved it.ken32

A Book You Can't Put Down

Published by Thriftbooks.com User , 21 years ago
The book Tangerine was a very touching thriller. It is about a boy named Paul Fisher, an unpopular soccer player who lives in a family that aims just about all of their attention toward the older brother, Erik, a star football player in high school. Paul, Erik, and his mom and dad move from Houston TX to Tangerine FL when Paul is in 7th grade. Paul tries hard to fit in as he gets used to his new surroundings. He had grown up to be known as a geek because of the big, thick glasses he has had to wear. He would be called "Eclipse boy", "Mars man", and many other awful names. On the other hand, Erik is the star of the Tangerine High School football team right from the first game he plays for them. He gets in the local paper, and it tells how amazing it is that he can kick 45 to 50-yard field goal kicks. Paul's dad, who can't stop talking about Erik going on to the pros, gets on Paul's nerves. "The Erik Fisher football dream" is the name Paul gives it. In Paul's family, it never seems to be forgotten.I say this book is a thriller because of certain mysteries, such as how Paul and his family have become the way they are. I enjoyed the way every chapter drew you in and kept you wondering how events turned about, and what would happen next. The story builds to a climax where a mystery is revealed.Paul tells the story very well. Many of the things he says and thinks are very touching. I think Paul describes his point of view and what he thinks very well. I like the fact that he doesn't care if he isn't the star of the family or town, but still cares about playing hard in every soccer game and trying to do well for his team. I really enjoyed reading this, even with the sad parts. A reader would want things to turn out well for a person like Paul. This is a wonderful story about growing up, and I highly recommend it!
Copyright © 2022 Thriftbooks.com Terms of Use | Privacy Policy | Do Not Sell My Personal Information | Accessibility Statement
ThriftBooks® and the ThriftBooks® logo are registered trademarks of Thrift Books Global, LLC